On November 3, a federal disaster declaration was issued for the new lava flow at Kilauea. The lava has destroyed only one home … so far.

[UPDATE: November 14, 2014.] On November 3, 2014, the U.S. Federal Emergency Management Agency issued a disaster declaration for the area impacted by the Kilauea lava flow. The new lava has been slowly making its way across the Big Island of Hawaii since June 27, 2014. The disaster declaration will provide important federal aid for state and local hazard mitigation efforts.

The new lava has now reached the Kaohe Homesteads, but the flow front stalled on October 30, 2014 about 155 meters (509 feet) above Pahoa Village Road. However, there are currently several active areas where the lava continues to breakout behind the flow front.

So far, the lava has only destroyed one home. The residents had been evacuated and no one was injured. The home was destroyed on Monday, November 10, 2014.

There has been some discussion of attempts to divert the flow away from populated areas but such action is highly unlikely at the present time.

Sulfur dioxide emissions from the Kilauea volcano can cause local problems such as acid rain and air pollution. Over the first few days of November, the emissions of sulfur dioxide ranged from 3,400 to 6,400 tonnes per day. The Hawaii Department of Health maintains a website where people can check for daily air quality alerts. On November 14, 2014, the air quality sulfur dioxide index was listed as “good.” 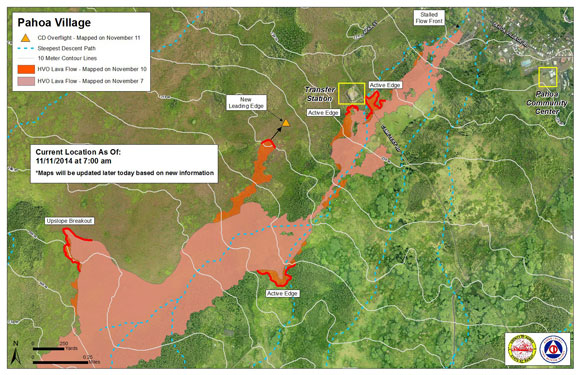 Extent of the new lava flow at Kilauea as of early November 2014. Image Credit: County of Hawaii. 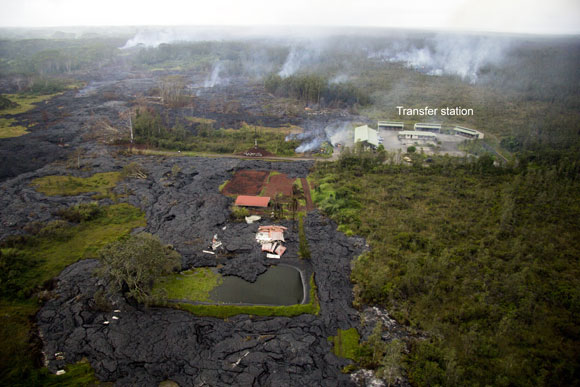 The Kilauea lava continues to advance. Officials from the U.S. Geological Survey and Hawaii’s Civil Defense Agency flew over the new lava flow at Kilauea – Hawaii’s most active volcano – on September 15 and 16, 2014 to get a close up view of the eruption. Their observations have confirmed that the lava flow from Kilauea, which began on June 27, 2014, is continuing to advance in the northeast direction across the Big Island of Hawaii. Officials said on September 17:

Between September 15 and 17, the June 27th flow narrowed and advanced northeastward at an average rate of 290 m/day (960 ft/day). By the afternoon of September 17, the flow had advanced approximately 16 km (10 mi) straight-line distance from the vent into the vacant, forested northwest portion of Kaohe Homesteads.

The lava is setting trees and shrubs on fire as it moves through forested areas, but the fires are not spreading officials say. The Hawaii Department of Health has issued a health advisory (pdf) for smoke exposures that could pose problems depending on the weather conditions. Among their recommendations, they are urging residents in smoke affected areas to stay indoors and limit physical activities.

Hawaii’s Civil Defense Agency posted an update to their website on September 16, 2014 that stated:

Currently the flow does not pose an immediate threat to area communities however residents of the Kaohe Subdivision are advised to continue to monitor the local radio broadcasts for further updates and for possible evacuation instructions if conditions change. Residents will be given adequate notice to safely evacuate should that be necessary. Civil Defense agency personnel will continue door to door notification in the Kaohe area today.

The Civil Defense Agency is working to establish alternate road access points at Railroad Avenue and Government Beach Road in the event that Highway 130 becomes impassible because of the lava flow.

Geologists say there’s no way to know at this time when the lava will stop advancing.

The Pu‘u ‘O‘o vent in the East Rift Zone of K?lauea Volcano began erupting on January 3, 1983, and has continued erupting for more than 31 years, with the majority of lava flows advancing to the south. Over the past two years, lava flows have issued from the vent toward the northeast. The June 27th flow is the most recent of these flows and the first to threaten a residential area since 2010-2011. On June 27, 2014, new vents opened on the northeast flank of the Pu‘u ‘O‘o cone and fed a narrow lava flow to the east-northeast. On August 18, the flow entered a ground crack, traveled underground for several days, then resurfaced to form a small lava pad. This sequence was repeated three more times over the following days with lava entering and filling other cracks before reappearing at the surface, in two of the cases farther downslope. Lava emerged from the last crack on September 6, forming a surface flow that initially moved to the north, then to the northeast, at a rate of 400 m/day (1,300 ft/day). The flow slowed thereafter and, since September 12, the rate of advancement has varied averaging 245 m/day (805 ft/day). 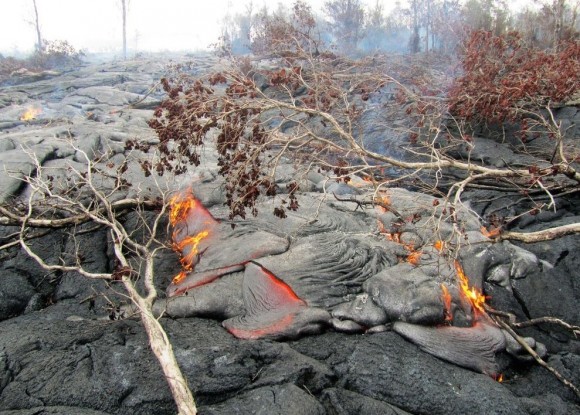 The lava from Kilauea volcano burns through vegetation in its path. Officials say residents will be given adequate notice to evacuate should that be necessary. Photo via USGS 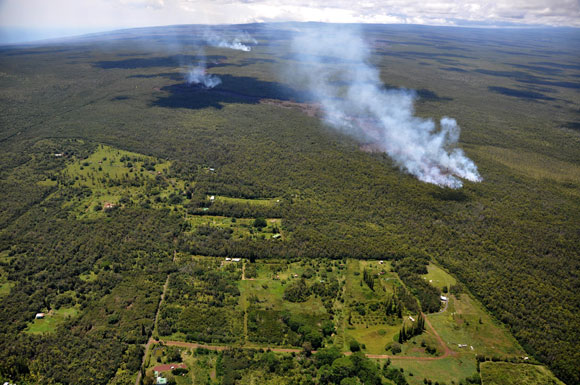 Smoke plumes caused by the new lava flow at Kilauea on September 12, 2014. Image via USGS. 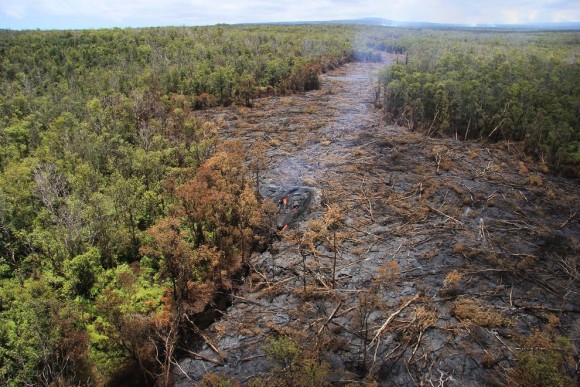 Kilauea is a 4008-feet (1222-meter) tall shield volcano located on the Big Island of Hawaii. It is Hawaii’s most active volcano. Kilauea began erupting from the East Rift Zone in 1983, and the lava flow typically moves at a slow pace in the southern direction until it reaches the ocean. The new lava flow, which began on June 27, 2014, is advancing in the northeastern direction across the island. Currently, the lava is advancing through a heavily forested area that has been closed to the public because of safety concerns. Officials are tracking the lava flow carefully to determine if and when farms and homesteads further away will need to be evacuated. While evacuation orders had not been given as of September 4th, officials are urging residents in the path of the new lava flow to finalize their evacuation plans. 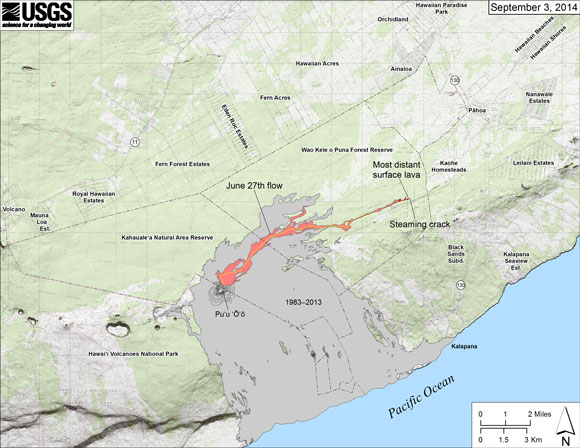 Map of the new lava flow at Kilauea as of September 3, 2014. Image Credit: USGS.

Mayor Kenoi commented on the emergency declaration in a press release. He said:

We are taking this step to ensure our residents have time to prepare their families, their pets, and their livestock for a safe and orderly evacuation from Ka‘ohe in the event the flow continues to advance.

Non-residents are being asked to avoid the area.

Residents are being asked to monitor Civil Defense updates closely in the days ahead.

According to a status update issued by the U.S. Geological Survey (USGS) on September 4, 2014, the lava could reach the Kaohe Homesteads boundary in 5 to 7 days if the lava continues to advance. The flow is now about a mile away from the homesteads, and it is moving at an average speed of 250 meters per day (820 feet per day). Thursday, USGS raised the volcano alert level from a watch to a warning. The public can track the lava flow activity at the Hawaiian Volcano Observatory website.

During the last week of August 2014, the new lava flow has moved into cracks and depressions in the land making it difficult for scientists to predict where the flow may go in the days ahead. However, thermal imaging technology is helping them to track the flow as the lava advances. 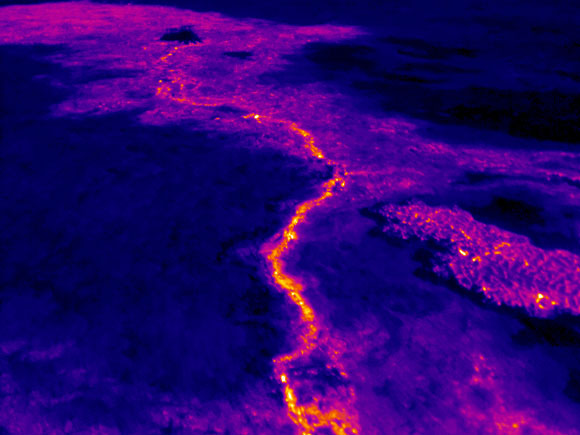 Bottom line: A state of emergency was issued on September 4, 2014 for Hawaii’s Kilauea Volcano as new lava flow continues to advance towards residences located northeast of the volcano. Residents are being urged to finalize their evacuation plans.
What is the Ring of Fire?

What causes volcanoes to produce lightning?