Microplastics are a growing concern for the Great Lakes

Scientists have found thousands of microplastic particles floating in the Great Lakes. They are concerned that the particles may disrupt aquatic food webs.

Microplastics are small pieces of plastic—typically less than 5 millimeters (0.2 inches) in size—that form in a variety of ways. Some of it is produced when large pieces of plastic breakdown in the environment. Other types of microplastic are generated when clothing made of synthetic fibers is washed in a washing machine. Additionally, microplastics are often intentionally added to consumer products such as paint, construction materials and personal care products. 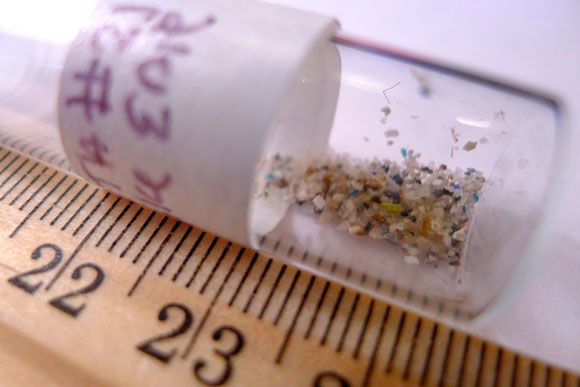 Once in the environment, pieces of microplastic can pose problems for aquatic life. While microplastic pollution doesn’t cause the entanglement issues that most people think of when they hear of plastic pollution, the tiny pieces of plastic are not benign. Microplastics can be ingested by a variety of aquatic organisms including copepods, mussels, worms, fish and seabirds. Scientists are concerned that ingested microplastics may impair the ability of organisms to feed, which may lead to disruptions in aquatic food webs. Microplastics may also play a role in the transfer of chemical contaminants into aquatic biota.

Sherri Mason, an Associate Professor of Chemistry at the State University of New York (SUNY) in Fredonia, commented on the project in an early press release. She said:

Roughly 80% of plastic debris found in the oceans comes from land. The Great Lakes comprise a flow-through water system and empty into the ocean. If our hypothesis holds true, we should find significant amounts of plastic debris here as well.

To sample the Great Lakes, scientists are towing fine-mesh nets across the surface of the water, which will trap buoyant microplastic particles. A large proportion of microplastics are buoyant, however, some pieces can sink into the sediment. So far, scientists have completed their sampling of Lake Superior, Lake Huron and Lake Erie in 2012 and sampling of Lake Ontario and Lake Michigan in 2013. Their results have not yet been published, but preliminary data show that there are relatively high concentrations of microplastics in Lake Erie. At some sites in Lake Erie, microplastic particles numbered more than 600,000 pieces per square kilometer. The lakes likely contain varying amounts of microplastic pollution because they have different numbers of wastewater inputs and different hydrological retention times. 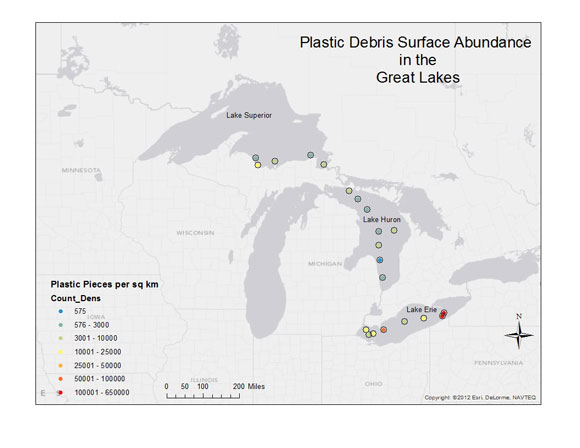 Microplastics detected in the Great Lakes during a 2012 sampling survey. Image Credit: 5 Gyres.

The microplastic research study on the Great Lakes is a collaborative effort between SUNY Fredonia and the 5 Gyres Institute, a Los Angeles-based nonprofit organization that is working to prevent plastic pollution in the world’s ocean and watersheds.

In the ocean, the gyres are international waters. You can’t point to a company or country to take responsibility for the problem. But in the Great Lakes, and any lake or river, you can find the source of plastic pollution. And we did just that.

One important source for microplastic pollution in the Great Lakes is facial scrubs and body washes, which contain microplastic beads that act as exfoliants to help remove dead skin cells from the surface of your skin. Several companies including Unilever, The Body Shop and Johnson & Johnson have agreed to phase-out their use of microplastic beads in facial scrubs and body washes by 2015. These companies are currently exploring options to use alternative exfoliating agents that are more biodegradable.

A large part of the problem with microplastics is that they aren’t biodegradable. Dr. Eriksen told EarthSky that microplastic particles can persist in the environment for many years. He said:

It all depends on where it is and what’s growing on it. Plastic in sediment is there for a loooong time. Plastic on the surface will photodegrade, biodegrade, mechanically degrade. But if it’s covered with a biofilm, it could last decades. So, microbead lifespan depends on location, time, microbial communities, and access to the sea.

Funding for the research project was provided in part by the Burning River Foundation, an Ohio-based organization dedicated to improving freshwater resources in the region.

Bottom line: Scientists are sampling the Great Lakes to determine the extent of microplastic pollution in the region. In 2012, high concentrations of microplastics were detected in Lake Erie. This year, scientists affiliated with SUNY Fredonia and the 5 Gyres Institute are sampling Lake Ontario and Lake Michigan to get a complete a picture of the extent of microplastic pollution in the Great Lakes. They are concerned that the small plastic particles may pose risks to aquatic life.

How is pollution changing Lake Baikal?