Ice cover on the Great Lakes has decreased by 71% over the past four decades according to a new study published in the Journal of Climate.

Ice cover on the Great Lakes has decreased by 71% over the past four decades according to a new study published in February, 2012 in the Journal of Climate.

The Great Lakes, located in eastern North America, contain about 20% of the world’s surface supply of freshwater. The ice cover that forms over the Great Lakes every winter plays a critical role in regulating water levels, structuring the lakes ecosystems and impacting the regional economies that depend on cargo shipments and hydropower generation.

In a study led by Jia Wang, an Ice Climatologist with the National Oceanic and Atmospheric Administration’s (NOAA) Great Lakes Environmental Research Laboratory in Ann Arbor, Michigan, scientists investigated ice cover on the Great Lakes from 1973 to 2010. Data were obtained from NOAA’s National Ice Center and from the Canadian Ice Service. These federal agencies have been collecting data on ice cover since the 1960s through both satellite imagery and visual observations made from airplanes.

The scientists observed that ice cover on the Great Lakes is highly variable from year to year. The scientists attribute the variability in ice cover to natural climate forcing patterns that result from impacts of the Arctic Oscillation and the El Niño Southern Oscillation on surface air temperatures in the region. They note that long-term trends in Great Lakes ice cover may also possibly be related to global climate warming.

Their research was supported by grants from the National Research Council and the U.S. Environmental Protection Agency’s Great Lakes Restoration Initiative. 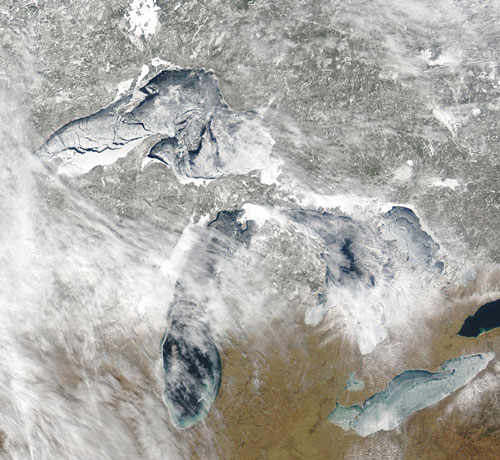 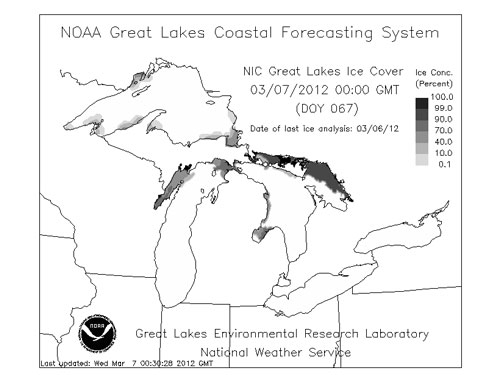 In fact, ice cover has been so low this year on Lake Erie that officials began removing the ice boom that prevents large chunks of ice from flowing out into the Niagara River on February 28, 2012. This is the earliest date for removal since the boom was first installed in the mid 1960s. The ice boom acts to prevent ice damage to hydropower intake equipment. Early boom removal is our harbinger of an early spring in western New York. Dare I say that I think the groundhog was wrong this year?

Bottom line: A study led by Jia Wang from the Great Lakes Environmental Research Laboratory in Ann Arbor, Michigan has found that ice cover on the Great Lakes has decreased by 71% over the past four decades. Results of the study were published on February 15, 2012 in the Journal of Climate.