All the Great Lakes have suffered these harmful algal blooms. Drought, invasive species, runoff and sewage, and warmer-than-average temps all contribute. 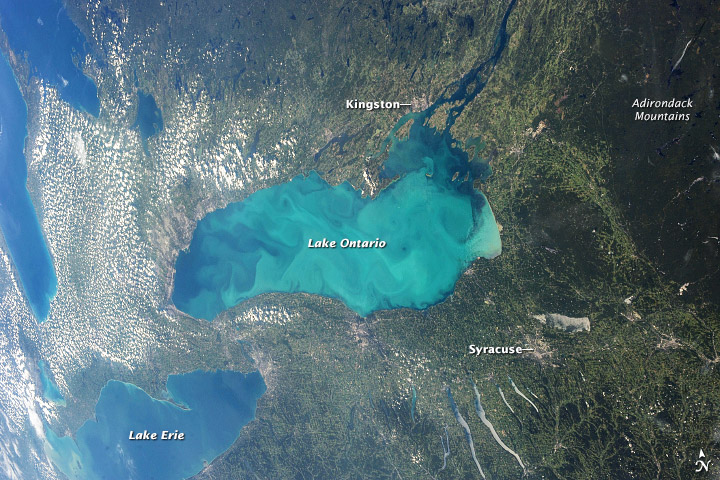 An astronaut on the International Space Station captured this image of a late summer plankton bloom across much of Lake Ontario, on the U.S. Great Lakes, on August 24, 2013. The greenish color is due to microscopic cyanobacteria, or blue-green algae, which can become so dense in the water, and color it so vividly, that the change is visible from orbit. NASA said:

Harmful algal blooms, or HABs, have been observed in all of the Great Lakes — particularly Lake Erie — and are caused by a variety of factors, including: changes in precipitation; drought; invasive species (quagga, zebra mussels, Asian carp); nutrient loading from runoff and sewage (nitrogen and phosphorus); and warmer-than-average temperatures …

Astronaut photograph ISS036-E-35635 was acquired on August 24, 2013, with a Nikon D3S digital camera using a 50 millimeter lens, and is provided by the ISS Crew Earth Observations experiment and Image Science & Analysis Laboratory, Johnson Space Center. The image was taken by the Expedition 36 crew. It has been cropped and enhanced to improve contrast, and lens artifacts have been removed.