The big story across California over the past several months has been continuing drought. However, it all changes this weekend (February 28-March 2, 2014) as a very strong storm pushes into the state from the eastern Pacific. Rainfall totals over the next 24 hours could add up to nearly half a foot (.15 meters) in parts of central and southwestern California. Heavy rain is needed to help ease the brutal drought; however, too much rain in too short a period of time may cause flash flooding and mudslides. The imagery of this storm on satellite is very impressive as a 976-millibar low slowly weakens as it pushes into the U.S. West coast.

And it’s not just California that’ll be affected by this. It’ll likely also be a pain for a large part of the United States this upcoming weekend with snow, ice, and sleet spreading into the Central Plains, Midwest, and into the Northeast.

As of February 25, 2014, the U.S. Drought Monitor has 26% of the state of California in an exceptional drought. This percentage is up 11% from last week when 15% of the state was in the worst drought category listed. Good news is that, this weekend, some spots could easily see three to five inches of rain with isolated spots seeing over six inches.

Unfortunately, the rain that falls over the next 24 hours will not remove the drought from the region. In fact, many places will have to experience an additional 15 inches of rain on top of these totals to simply get back to average.

It is not unusual to see strong systems affect California at this time of the year. In fact, January and February are California’s rainy seasons. With very little rain falling in the state during this “wet” time of the year, the state of California was becoming increasingly concerned on the economic state as the drought plays major problems on the food supply. With spots dried up, mudslides will be an increasing concern through Saturday, March 1.

The same storm that is expected to dump heavy rain and mountain snow across the Sierras will also become a major winter storm for the United States. As it pushes into the Central Plains, Midwest, and Mid Atlantic through Monday, it will likely dump a mixture of heavy snow, freezing rain, and sleet stretching from Wichita, St. Louis, Indianapolis, Washington D.C., and New York City. The National Weather Service from Kansas City (@NWSKansasCity on Twitter) tweeted a water vapor satellite image early on the morning of Friday, February 28, 2014 showing the storm and the forecast track over the next 48 hours. 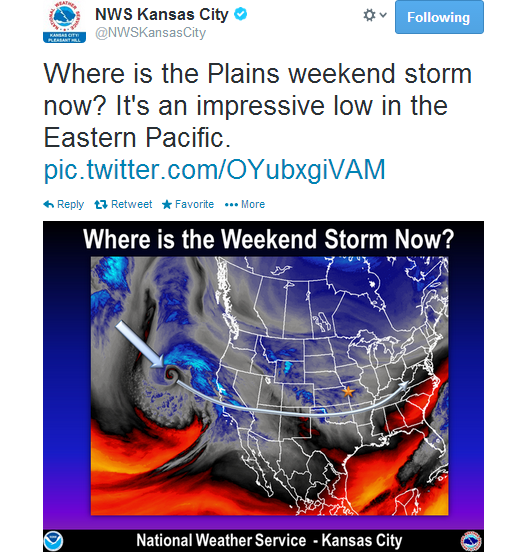 Bottom line: A major storm is slamming California this weekend (February 28-March 2, 2014). It has the potential to produce over six inches (.15 meters) of rain. While the rain is needed, too much in a short period of time may result in flash flooding and mudslides. Meanwhile, the same storm system will push across the U.S. Central Plains into the Midwest to produce a significant winter storm that is capable of producing heavy accumulations of snow, ice, and sleet Sunday into Monday. While meteorological spring begins on March 1, a large portion of the United States will still be under old man winter’s wrath.

Thank you! Your submission has been received!
Oops! Something went wrong while submitting the form.
END_OF_DOCUMENT_TOKEN_TO_BE_REPLACED