Triple digit heat can be found through a large area across the central and eastern United States. Record breaking heat will continue this weekend. 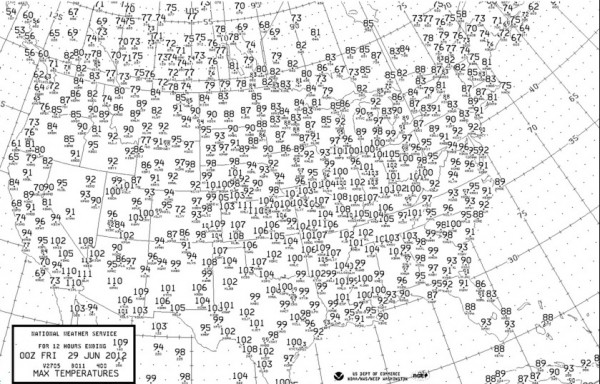 High temperatures recorded on June 28, 2012. Look at all of the 100s! Click this link to see a larger image! Image Credit: NOAA/NWS

Meteorological summer began in the northern hemisphere on June 1, 2012. With that said, it is expected to see hot weather in the 90s with a few places hitting over 100 degrees Fahrenheit. However, a large area of high pressure stationed across the central portions of the country has brought extremely hot temperatures with many states experiencing 100°F (38° Celsius) or higher. On Friday, June 29, 2012, at least 26 states are listed in a heat advisory. Many areas are experiencing record heat with temperatures soaring over 110°F in parts of Kansas. Heat waves are common in the United States during this time of the year, but to see so many extreme temperatures across the nation with many areas experiencing over triple digits for the month of June is breathtaking. According to CNN, United States heat warnings and advisories cover approximately 730,000 square miles, or roughly the size of the entire country of Mexico! 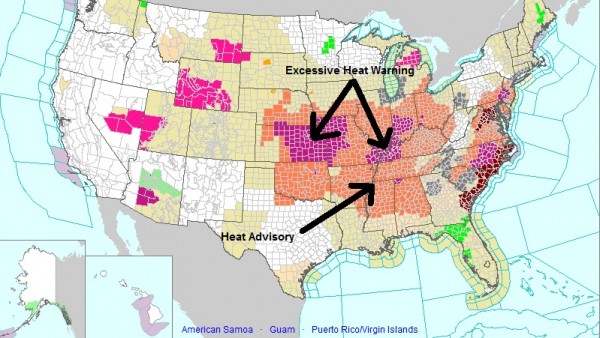 On Thursday, June 28, 2012, 94 records were broken and 37 were tied. Take a look at some these record high temperatures recorded across the United States. The following cities broke their record highs, and are just a few of the many areas that experienced record heat: 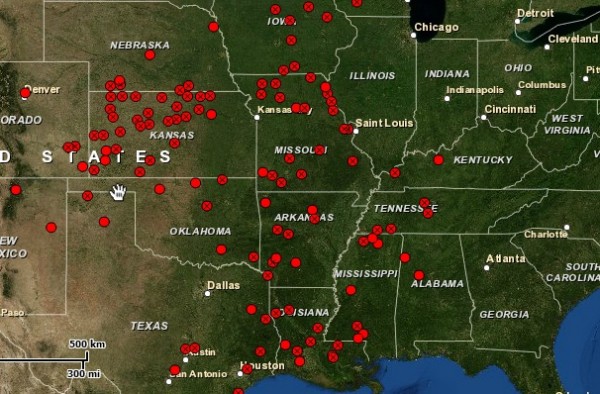 Record high temperatures that were broken or tied on June 28, 2012 across the United States. Image Credit: NCDC 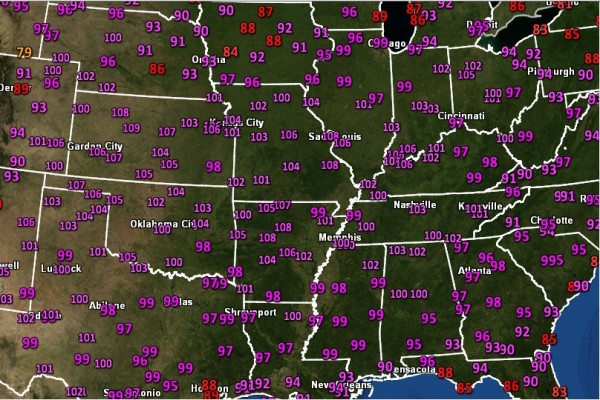 The major heat across the central plains and points east is due to a large area of high pressure bringing sinking air and extremely hot temperatures across the nation. Many places are experiencing very dry air with relatively low dew points. Dry air can heat up and cool off quickly, so daytime temperatures are able to sky rocket into the 100s very easily. Also, drought conditions continue to worsen across the United States, especially across the same regions experiencing this major heat. When temperatures get above 90°F, it actually dries up the moisture content in the soil faster and can intensify the drought. The hardest area hit with drought this past year was across the southeast, especially in Georgia. Tropical Storm Debby really took a dent out of the drought stricken areas in Florida and southern Georgia. However, drought conditions are getting worse in central and northern Georgia. Drought conditions are also getting worse across Arkansas, Missouri, Illinois, Indiana, and Kentucky. Just as I am writing this, Washington D.C. jumped from 85°F to 96°F within one hour at 8:52 AM to 9:52 AM on Friday, June 29, 2012. Amazing!

Heat related deaths is the number one killer in the United States, and it kills more than any other extreme weather event such as tornadoes, hurricanes, and lightning. The National Weather Service and NOAA has posted an article that goes over tips that can help you stay healthy and cool during the heat of the summer. It is important to take numerous breaks if you plan on working outdoors, and to always stay hydrated. It sounds like basic information everyone should understand and follow by now, but like every year, heat related deaths still occur. Check up on anyone you know, especially the elderly, who do not have air conditioning or ways to stay cool in this intense heat.

Bottom line: Once again, many records are being broken across the central and eastern United States at the end of June 2012. Dry conditions and heat are only amplifying the drought across many areas including the Southeast, Mid-West, Central, and in the Southwestern United States. The only “cool” weather that can be found in the nation is across the Pacific Northwest. These warm temperatures also extend into Canada, but not nearly as extreme. With dry conditions and hot temperatures, wildfires have been another large concern across the Rocky Mountains, especially in the state of Colorado. Record breaking heat will likely continue through the weekend, especially in parts of the eastern United States. Stay cool, and stay inside during the peak heating of the day, which typically occurs from 12 PM to 6 PM.