UPDATE JULY 1, 2012 11 AM CDT (16 UTC). The Waldo Canyon fire – which began on June 23 and is now being called the most destructive fire in Colorado history, with 347 homes destroyed – is now 45% contained, according to InciWeb.

UPDATE JUNE 28 10 AM CDT (15 UTC): The Waldo Canyon fire that is burning on the northwestern edge of the city of Colorado Springs is still going strong this morning. The Denver Post says at least 300 homes were burned to the ground by the fire on Wednesday, June 27. According to InciWeb, there are now over 18,500 acres burned, and over 1,000 firefighters are on the scene. InciWeb also created the Google map below, which we’ve reproduced here (map is not clickable), showing how the fire has encroached on the edge of this Colorado city. At this time, the fire is still only 5% contained, InciWeb says.

InciWeb created this Google map (not clickable here, but go to InciWeb’s site if you want to click). It shows how the Waldo Canyon fire is encroaching on the northwest edge of the city of Colorado Springs.

We also found these very scary YouTube videos of the Waldo Canyon fire, via Time.com. I believe these are all from June 26, the day before the fire doubled in size overnight and spread down the mountains into the city. 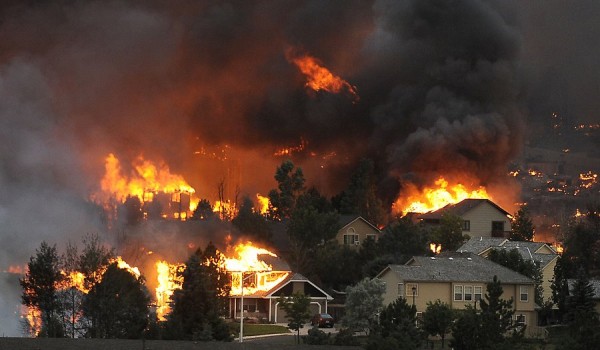 Wildfire has spread into the communities of northern Colorado Springs. Image Credit: Via twitter/twitpic @DanCMos

Violent and dangerous wildfires are spreading across the northern part of the city of Colorado Springs, Colorado at this time.According to the Denver Post, the Waldo Canyon fire in El Paso County was burning in the hills above the city early this week, but strong winds, all-time high temperatures, and dry conditions created disastrous conditions as the blaze increased and began to spread into populated areas. The fire is reported to have doubled in size overnight last night. Although some of these wildfires were likely sparked by lightning strikes, the origin of all the fires is not known. Over 32,000 people have been ordered to evacuate their homes, and tens of thousands have already fled. At this time, the fire has destroyed an unknown number of homes. Only 5% of the fire has been contained. As of 9 a.m. CDT (14:00 UTC) on June 27, 2012, KOAA 5 news in Colorado Springs is reporting 15,324 acres have burned. Colorado Springs Fire Chief Richard Brown said:

This is a firestorm of epic proportions. 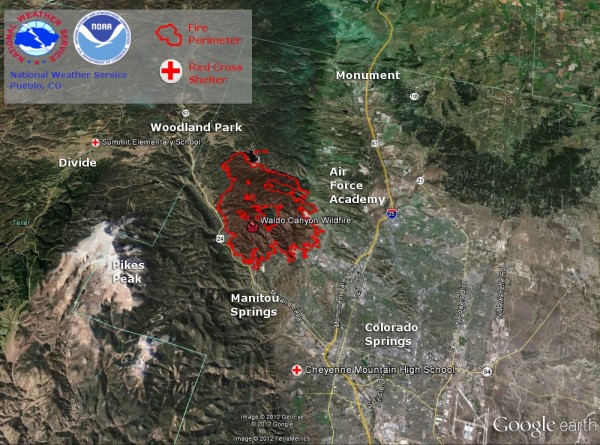 Look at the areas affected by the wildfire near Colorado Springs, Colorado. Image Credit: National Weather Service in Pueblo, Colorado 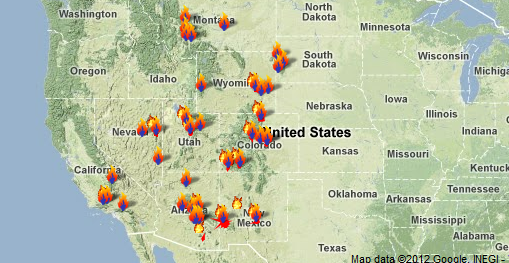 Image of the current wildfires burning in the United States as of June 27, 2012. Image Credit: Google

Many homes were burned in the Mountain Shadows neighborhood of Colorado Springs on Tuesday. The fire pushed into the Queens Canyon area, where strong winds reached up to 65 miles per hour at the top of the ridge and pushed the fire down the other side into the Flying W. Ranch and Mountain Shadows neighborhoods. Portions of northwestern Colorado Springs were forced to evacuate which includes areas north of Garden of the Gods from the western border of the Springs to I-25 and northward to the southern sections of the U.S. Air Force Academy.

This Waldo Canyon fire, now in Colorado Springs, occurred just after another fire – called the High Park fire – west of Fort Collins. That earlier fire was most recently measured at 87,250 acres. At this time, it has 55 percent containment. So far, the High Park fire is still considered the most destructive fire in Colorado history and has torched at least 257 homes.

View from space: Wildfires in Colorado and central Russia 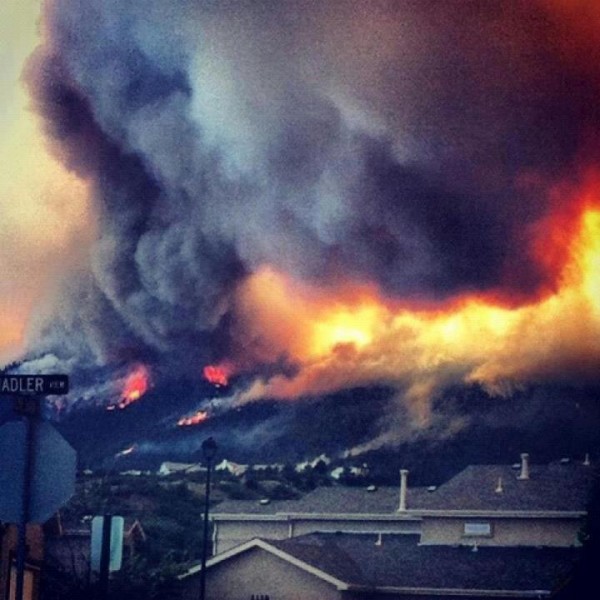 What is truly amazing is the intensity of these fires. They are easily seen via dopplar radar and satellite imagery. According to the National Weather Service in Memphis, Tennessee, the smoke has been so noticeable that it can be seen as far east into the Mid-South. A large ridge (high pressure), which has produced a clockwise steering current from Colorado to Nebraska, Kansas, Missouri, western Tennessee, Arkansas, and to northeast Texas. This steering current has allowed us to see the smoke clouds spread on visible satellite images and it often appears as a milky white color. In the image below, you can see the fire burning just west of Fort Collins, Colorado near the intersection of Kansas, Nebraska, and Colorado. Also, you can see what was then Tropical Storm Debby producing major flooding in Florida and southern Georgia.

Visible satellite animation of the smoke from the wildfires in Colorado. Also, you can see Tropical Storm Debby spin. Video taken on June 25, 2012. Image Credit: NOAA/NWS

On Doppler radar, you can see the the fire through reflectivity. In the video I created below, you can see the animated image of the wildfire north of Colorado Springs, Colorado. It is showing the large smoke and dust picked up through radar scans. 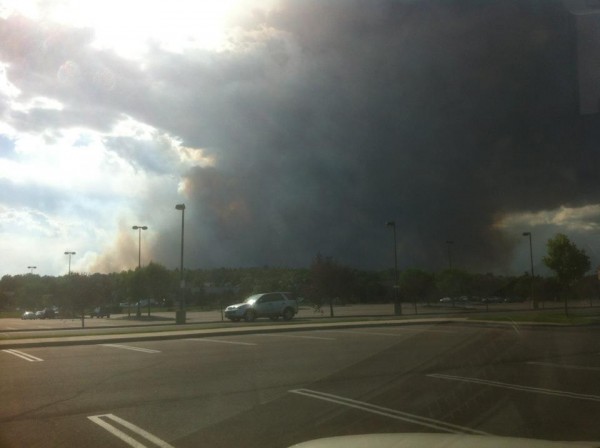 View of the smoke from the wildfires near Colorado Springs on June 26, 2012. Image Credit: Jason Epstein

Low humidity, strong winds, hot temperatures, and dry conditions equal a bad combination for firefighters across the western United States at this time. For the past week, Colorado was experiencing some of the hottest weather ever recorded in the state. According the to the National Weather Service, Colorado Springs broke its all-time record for maximum temperature yesterday (June 26, 2012), hitting 101 degrees. The high temperature in Colorado Springs has hit 100 degrees or more for three of the last four days. There has never previously been more than one consecutive 100 degree day at the airport. Also yesterday (June 26), Pueblo broke its record high for the day at 106 degrees Fahrenheit. The temperature at Pueblo’s airport has hit 105 degrees or higher for the past five consecutive days. The previous record for consecutive days of 105 degrees or higher was three days, set in 2003. Fire conditions are not expected to improve too much across the region as hot temperatures are expected to continue with highs in the 90s. Isolated thunderstorms are possible in the region, but many people view this as a problem across the region because these storms could spark more wildfires due to cloud to ground lightning. Also, outflow boundaries from these storms can produce strong winds that can spread the fires into more regions of the state. Meanwhile, smoke and ash will create low visibility and make breathing difficult. There were reports that ash was falling in the air about the size of half dollars.

Fire near the interstate as it gets closer to the northern suburbs of Colorado Springs. Image Credit: Johnnie Waid 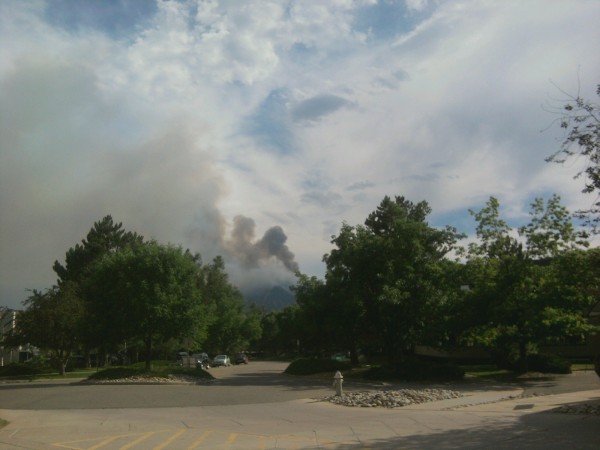 Smoke from the wildfires in Colorado. Image Credit: Kelly Keene

The bottom line is we’re just going to have to work through this — all of us. We just flew over the fires. It was like looking at a military invasion.

If you would like to make donations to help wildfire victims, please visit the Denver Post to find out how.

Bottom line: With low humidity, windy conditions and temps at an all-time high in Colorado Springs, Colorado, violent and dangerous wildfires are spreading across the northern part of the city. The Waldo Canyon fire is responsible for the order to evacuate 32,000 area residents. Businesses and homes are in the way of the flames. As of 9 a.m. CDT (14:00 UTC) on June 27, 2012, KOAA 5 news in Colorado Springs reports 15,324 acres have burned. At least 1,000 firefighters are on the scene to protect homes and to prevent the spread of this wildfire. The fire continues to burn, and many areas are still evacuating or have already evacuated.