International effort launched to track black carbon in the Arctic

The Arctic is warming rapidly, and scientists believe that reducing the amount of black carbon released to the atmosphere will help to slow down climate change. On April 18, 2011 six nations announced that they will collaborate in a new effort to track black carbon in the Arctic in order to develop fast and effective strategies to mitigate the impact of black carbon on climate change. The effort is titled Coordinated Investigation of Climate-Cryosphere Interactions (CICCI), and participants will include scientists from China, Germany, Italy, Norway, Russia, and the United States.

When particles of black carbon fall onto snow and ice in the Arctic, the ground absorbs more incoming solar radiation and melts at a faster rate. Scientists refer to this effect as a decrease in albedo – or surface reflectivity.

In a press release, Tim Bates, a chemist at NOAA’s Pacific Marine Environmental Laboratory and co-lead for the CICCI initiative in the United States, described how black carbon can contribute to warming in the Arctic:

Carbon is dark in color and absorbs solar radiation, much like wearing a black shirt on a sunny day. If you want to be cooler, you would wear a light-colored shirt that would reflect the sun’s warmth. When black carbon covers snow and ice, the radiation is absorbed, much like that black shirt, instead of being reflected back into the atmosphere. 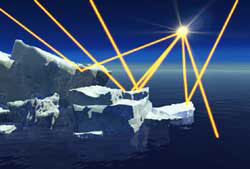 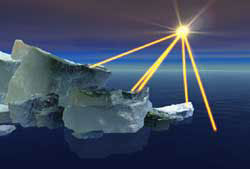 The Arctic is warming at an unprecedented rate. On May 4, 2011, the Arctic Monitoring and Assessment Programme (AMAP) released a comprehensive report detailing the changes that are occurring in the Arctic at a conference in Copenhagen. The AMAP report is titled Snow, Water, Ice and Permafrost in the Arctic (SWIPA).” It was compiled by nearly 200 experts on polar environments.

A key finding of the SWIPA report is that the past six years (2005-2010) have been the warmest period ever recorded in the Arctic, and that these changes in the Arctic are being driven by higher surface air temperatures. Further, the SWIPA report describes how warming of the Arctic may negatively impact people and ecosystems in the Arctic and in areas beyond through events such as melting sea ice, thawing permafrost, loss of wildlife habitat, damage to infrastructure and rising sea levels.

People responded to EarthSky’s earlier coverage of the SWIPA report by asking: what can be done to stop or reverse warming in the Arctic?

In addition to benefiting the Arctic, international efforts to reduce black carbon are projected to reduce future global warming by 0.5 oCelsius, prevent 2.4 million premature deaths due to respiratory illnesses and boost the production of crops such as maize, rice, soybean, and wheat.

The 2011 international CICCI initiative will yield important information for shaping future black carbon reduction strategies. Observations of black carbon in the Arctic will be collected from aboard ships, from land-based sites, and from aircraft. These data from CICCI will help to provide accurate measures of how much black carbon is being deposited in the Arctic, where it’s coming from, and how the extra carbon is affecting Arctic ecosystems and contributing to climate warming trends.

TwitterFacebookPinterestBufferShare
Posted
May 22, 2011
in
Earth

Thank you! Your submission has been received!
Oops! Something went wrong while submitting the form.
END_OF_DOCUMENT_TOKEN_TO_BE_REPLACED