It was hot in summer 2012, but that year also had record wildfires in the N. Hemisphere. Scientists now think soot from the fires helped melt Greenland’s ice.

In July 2012, over 97% of the surface of Greenland’s ice sheet melted. Scientists said the melt was unprecedented in the satellite record. What caused it? Warmer air temperatures in previous years had not caused similar melting. This fact led scientists to suspect that something besides air temperatures might have played a role in the melt. Since then, scientists have had a chance to analyze and study this unusual event. They now think that both warm air temperatures and dark soot from forest fires were to blame. They published this new research in the journal Proceedings of the National Academy of Sciences on May 19, 2014. 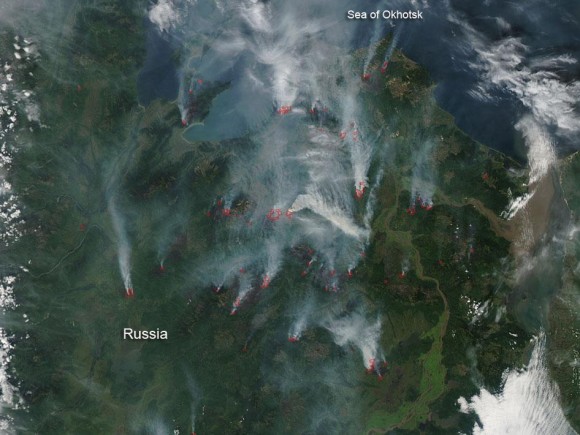 NASA’s Aqua satellite acquired this natural color image on August 28, 2012. It shows wildfires in eastern Russia, which began burning that year in June. Read more about this image from NASA.

With support from the U.S. National Science Foundation and NASA, scientists collected firn cores – similar to ice cores but consisting of packed granular snow – and surface snow samples from several different locations in Greenland. They analyzed them for the presence of black carbon. Black carbon or soot that originates from forest fires and fossil fuel emissions in lower latitudes can be transported over long distances to Greenland. Once deposited on the ice sheet, the black carbon reduces the snow’s capacity to reflect sunlight and contributes to warming.

They found that black carbon concentrations in the Greenland ice were exceptionally high during 2012. Interestingly, black carbon concentrations were also exceptionally high in deep core samples corresponding to the year 1889 when another rare surface melt event had occurred. The presence of warm air temperatures and high soot concentrations during both of the 2012 and 1889 melt events strongly suggests that both of these factors play an important role in this type of surface melting.

While more detailed chemical analyses of the black carbon are needed, preliminary data indicate that the soot in 2012 was from widespread forest fires in North America and Siberia and not from fossil fuel emissions. 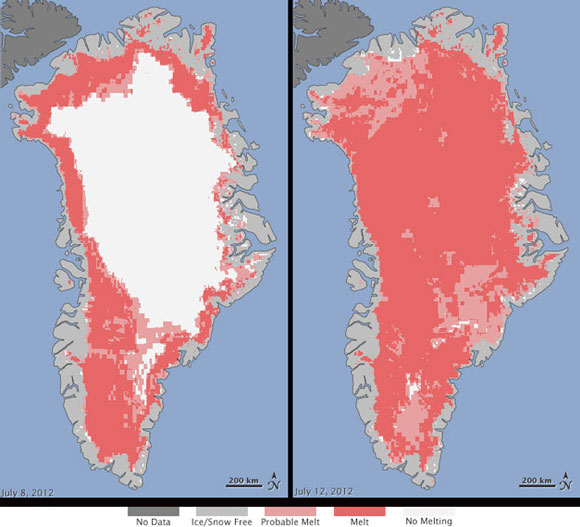 Kaitlin Keegan, lead author of the new study and doctoral student at Dartmouth, commented on these findings in a press release. She said:

The widespread melting of the Greenland ice sheet required the combination of both of these effects—a lowered snow albedo from ash and unusually warm temperatures—to push the ice sheet over the threshold. With both the frequency of forest fires and warmer temperatures predicted to increase with climate change, widespread melt events are likely to happen much more frequently in the future.

Mary Albert, co-author of the study and director of the U.S. Ice Drilling Program, added that:

Our Earth is a system of systems. Improved understanding of the complexity of the linkages and feedbacks, as in this paper, is one challenge facing the next generation of engineers and scientists—people like Kaitlin.

Other co-authors of the study included Joseph McConnell and Ian Baker. 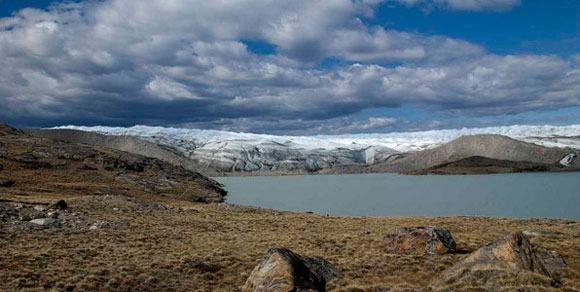 Bottom line: New research published in the journal Proceedings of the National Academy of Sciences on May 19, 2014 suggests that the unusually large melt of Greenland’s ice sheet in 2012 was due the combined effects of warm air temperatures and high concentrations of ash from forest fires. Such melt events are expected to become more frequent in the future because of climate change.

Antarctica is losing 159 billion tons of land ice every year