Antarctica is losing 159 billion tons of land ice every year

This is Antarctic land ice, not sea ice, which in recent years has expanded. The land ice loss is now thought to drive 0.43 millimeters of global sea level rise per year. 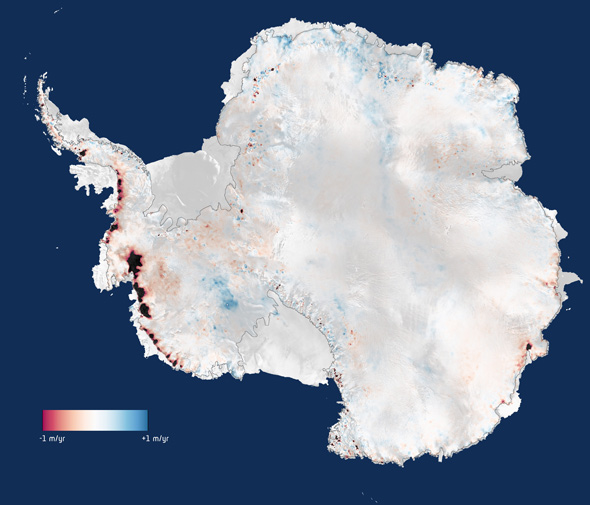 Antarctica is losing land ice much faster than previously released. In this image, areas shown in red to black are losing more than a meter of surface ice per year.

Antarctica is losing land ice much faster than previously measured. Overall, Antarctica is losing 159 billion (“yes, billion, with a b”) tons of ice every year. That’s enough land ice from Antarctica to push global sea levels up by 0.43 millimeters (0.017 inch) per year. We are talking about land ice here, not sea ice, which has been spreading out around Antarctica in recent winters. Previous measurements (made from 2005 to 2010) were lower, closer to 100 billion tons per year. The new information comes from CryoSat, a European Space Agency Earth-observing satellite. Cryosat has been using a radar instrument specifically designed to measure the shape of the ice sheet. The new information is published online in the journal Geophysical Research Letters. It comes out only about a week after scientists at the University of California and NASA announced that the loss of six major Antarctic glacier to the sea appears inevitable and in the same week that the Union of Concerned Scientists released a report showing 30 U.S. landmarks at risk from climate change.

Phil Plait has a good article about ice loss from Antarctica in his blog on Slate.