Scientists working at the Rocky Mountain Biological Laboratory in Colorado have found that early spring snow melts are reducing the amount of nectar produced by flowers, which in turn is negatively impacting butterflies populations that depend on the flowers for food. Their research was published on March 14, 2012 in an early online edition of the journal Ecology Letters.

Carol Boggs from Stanford University and David Inouye from the University of Maryland have amassed 25 years of data on the mormon fritillary butterfly, Speyeria mormonia. This species of butterfly lives in mountain meadows along western portions of North America. 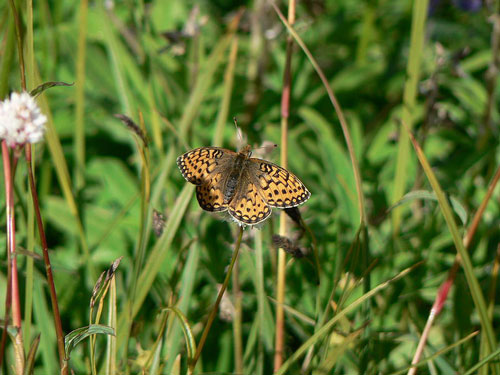 The scientists observed that sizes of the annual butterfly population in the Rocky Mountains were unusually low during years like 2012 with early snow melts. Through their research, they were able to determine that early snow melts reduce the amount of nectar produced by the flower Erigeron speciosus, also known as Aspen fleabane. Aspen fleabane is the preferred source of nectar for the mormon fritillary butterfly.

When spring comes early to the Rocky Mountains, the snow melts and aspen fleabanes flower. This leaves the newly developing plants susceptible to early-season frosts that can kill flower buds. In years with early snow melts, the scientists observed that Aspen fleabanes produced a substantially lower number of flowers than in years with later snow melts.

Nectar from Aspen fleabane flowers is an important part of the butterfly’s diet. In the laboratory, the scientists noticed that the amount of nectar that a female ate determined the number of eggs that she laid. Hence, they concluded that low nectar production during years with early snowmelts was likely contributing to low egg production by female butterflies and driving down the population size. They also note that early snow melts and early-season frosts may directly kill young, vulnerable caterpillars. 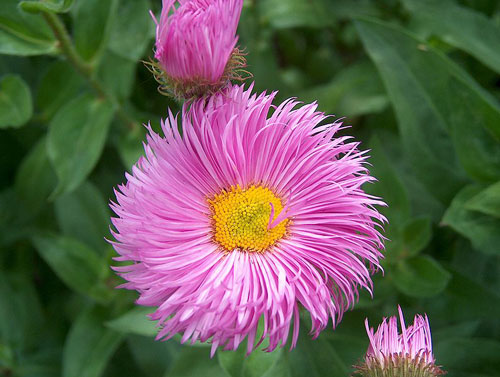 When the scientists constructed a mathematical model of the effects of snow melt on butterfly population size, they found that this climate factor alone explained more than four-fifths of the observed variation in population growth rate.

It is very unusual for research to uncover such a simple mechanism that can explain almost all of the variation in growth rate of an insect population.

Dr. Inouye’s research at the University of Maryland focuses in part on understanding the effects of climate change on high altitude environments.

Dr. Boggs research at Stanford University explores how plant-insect interactions respond to changes in the environment. In the press release, she noted that this year will likely be particularly hard on the butterflies because of the unusually warm weather. She said:

We already can predict that this coming summer will be a difficult one for the butterflies, because the very low snowpack in the mountains this winter makes it likely that there will be significant frost damage.

Thankfully, the mormon fritillary butterfly is not currently listed as a threatened or endangered species. However, I wonder if this new study by Boggs and Inouye might have implications for butterflies that are of conservation concern. For example, could early spring weather be contributing to population declines in other endangered butterfly species? Endangered species are notoriously difficult to study in depth because of their low population size? I guess we will learn more over time and with good data.

The importance of collecting good data was also highlighted by Dr. Inouye in the press release when he stated:

Long-term studies such as ours are important to understanding the ‘ecology of place’ and the effects of weather and possible climate change on population numbers. Research of this nature is critical to assessing the broader effects of weather on an ever-changing earth, and field stations such as [the Rocky Mountain Biological Laboratory], by facilitating longer-term, longitudinal studies, are an invaluable asset in this regard.

Bottom line: Scientists working at the Rocky Mountain Biological Laboratory in Colorado have found that early spring snow melts are reducing the amount of nectar produced by flowers, which in turn is negatively impacting butterflies populations that depend on the flowers for food. Their research was published on March 14, 2012 in an early online edition of the journal Ecology Letters.