It is technically winter, but the U.S. is experiencing a weather pattern typically seen in early summer. Meanwhile, it’s been unusually cold in Europe and Asia.

It is technically winter, and the United States is experiencing a weather pattern typically seen in early summer. Unseasonably warm temperatures have developed east of the Rocky Mountains and have extended north into Canada. Synoptically, or looking at the big picture, the weather pattern resembles a late May and early June pattern. More than 2,000 high temperature records have been tied or broken since March 1, 2012, and more are expected to be broken for the next couple of days, because the weather pattern is very slow to budge or move. What is causing this heat, and will this be a sign of a brutally hot summer?

For the month of February, we saw a lot of extremes across the globe. Earth likes to balance things out, so in a way, it makes sense that Europe and Asia experienced such extreme cold temperatures while the United States saw above average temperatures. In Europe and Asia, nearly 650 people died because of the extremely cold temperatures. So much snow fell that these areas saw the third largest February snow cover extent since record keeping began. Australia also experienced a very cool summer and was ranked the 8th coolest minimum February. The last time Australia had such cool temperatures was back in 1990.

Now, take a look at the record highs that have been set across the United States for the month of March so far. This includes dates from March 1, 2012, through March 15, 2012. Of temperatures recorded, 2,052 records were either tied or broken so far for the month of March. This number is expected to grow as the warm temperatures continue across the majority of the United States. 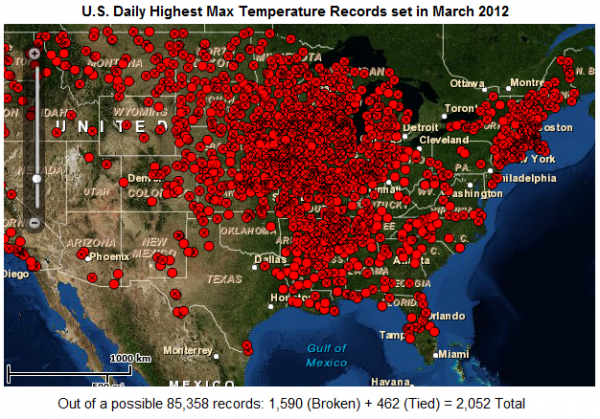 Temperatures have soared into the 70’s and 80’s Fahrenheit across Illinois, Indiana, Michigan and Wisconsin, and spreading as far north as North Dakota, Minnesota, and into Canada. The main reason for these warm temperatures is based on the jet stream across the United States. A large trough has been in place across the western United States. Troughs bring lower pressures and stormy weather across the affected regions. The western United States has been cooler and wetter the past few weeks, and for a good bit of this winter. Meanwhile, a large ridge has been built east of the Rocky Mountains. Ridges act as areas of high pressure that provide sinking air. Warm air from the south has been spilling northward to provide record-breaking temperatures across the United States. The jet stream is responsible for this digging and lifting of these troughs and ridges. Due to the position of the jet, and the blocking features that are taking place, the warm spells are continuing into the weekend.

Temperatures are easily 20-30 degrees F above average in many areas. Here’s a look at some records that have been broken on March 15, 2012, taken from Jeff Masters and the National Climatic Data Center:

Springfield, Illinois had a record high of 83 F which broke their previous record of 79 F set back in 1995. Normal values for this time of year are 52 F/32 F.

Madison, Wisconsin had a record high of 82 F. According to the National Weather Service, it was the earliest 80 degree day of the year on record, beating the previous earliest date by two weeks. The high of 82 F tied for the warmest temperature ever recorded in Madison in the month of March.

Minneapolis, Minnesota typically sees average high and low temperatures around 41 F/24 F. For the next three days, the forecast highs are expected to climb to around 78-80 degrees. Clearly, they would be almost 40 degrees above average if this occurs.

Take a look at all of the record highs broken on March 15, 2012, alone. As many as 344 records were broken and 67 tied their previous records, which makes a total of 411 records set across the United States alone. Note: you won’t see this happen across the Northwest Pacific coast or across Alaska! 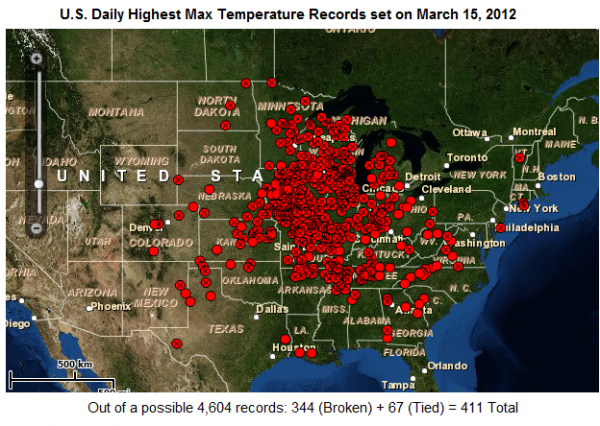 Record highs that were broken on March 15, 2012. Image Credit: NCDC

The Arctic Oscillation and North Atlantic Oscillation have been positive in recent weeks, which practically keeps the cold air to the north and it does not allow it to push to the south into the United States. If these two features dip negative, which some models are hinting at, the unusual warmth across the United States could lessen as more troughs and cooler air could push further south. We typically like to look at the AO and NAO during the winter months as they can give us an idea when Arctic air outbreaks occur.

Why is this pattern typically seen in May/June?

The severe weather season typically occurs in Dixie Alley, which includes the majority of the southeast. The jet stream is typically located further south in March and April. By mid to late April, the jet stream typically pulls northward near the central plains and Great Lakes region. The jet stream provides a separation of cold and warm air masses. It also provides a track for areas of low pressure. Jet streams typically add that extra ingredient that allows us to see severe weather and tornado outbreaks. If the jet stream is so far north, the dynamics for tornadoes becomes limited. Across the eastern United States, a lot of the storms firing up in the afternoon and evening hours are considered to be “pulse” thunderstorms. These storms are formed due to the instability in the atmosphere and a lifting mechanism (cold pool or an outflow boundary) allowing for storms to grow and develop. Wind shear is typically lacking in these areas, so the storms usually provide hail, strong winds, and lightning, and then dissipate. Afternoon thunderstorms due to such high instability are something we typically see in the summertime. However, it is in the middle of March and these storms are already occurring. The jet is so far north, the severe weather threats are occurring in the northern states, such as Michigan. In fact, a preliminary EF-2 tornado hit parts of Dexter, Michigan on March 15, 2012, causing over 100 homes to be damaged or destroyed. Events such as this should not take place until May and early June. However, it is occurring due to the overall pattern.

It is still too soon to tell whether or not this upcoming summer will be extremely hot across the United States. If anything else, I do not expect this pattern to continue for the rest of the spring. I still would not be surprised if we saw a late season freeze in early April across the Deep South. For now, none of the weather models are hinting at this. Late season freezes can cause a lot of problems for agriculture, so hopefully this will not occur. La Niña is expected to diminish by late April, and neutral conditions are expected to develop. Once again, we’ll have to see how the atmosphere reacts to this pattern too. Many forecasts are hinting at an El Niño developing over time. If this occurs, it could change our weather patterns globally once again. For now, NOAA forecasts indicate probable above average temperatures for most of the United States for the next 30 days.

Bottom line: A large record-breaking “heat wave” has hit parts of the United States east of the Rocky Mountains. Many areas are seeing temperatures 20 to nearly 40 degrees F above average. A large ridge of high pressure and the northern placement of the jet stream is largely responsible for the warm temperatures seen in this region. More records are expected to be broken this weekend. As of now, the pattern will be slow to move, and models are hinting at a slightly different look towards the end of next week as the trough to the west tries to push east. As this happens, we could see severe weather break out for parts of the central plains and along the Mississippi River. It is hard to believe we are seeing May-like temperatures in late winter!