Large dead zone in 2013 is partly due to wet spring conditions in the Mississippi watershed, which increased nutrient runoff, triggering algae blooms.

The oxygen-depleted dead zone that forms each summer in the Gulf of Mexico has reached 5,840 square miles in size, according to NOAA-supported scientists. The 2013 dead zone is about twice as large as the one that formed in 2012. The larger size of the dead zone in 2013 is partly due to wet spring conditions in the Mississippi watershed, which have increased the amount of nutrient runoff in contrast to last year, when drought gripped much of the region.

Nutrient runoff from agricultural fields and other human activities is transported down the Mississippi watershed into the Gulf of Mexico where it triggers algae blooms. When the algae die and decompose, the decomposition process uses up oxygen in the water. Low oxygen or hypoxia can be deadly to many types of marine organisms, especially those that can’t escape quickly. 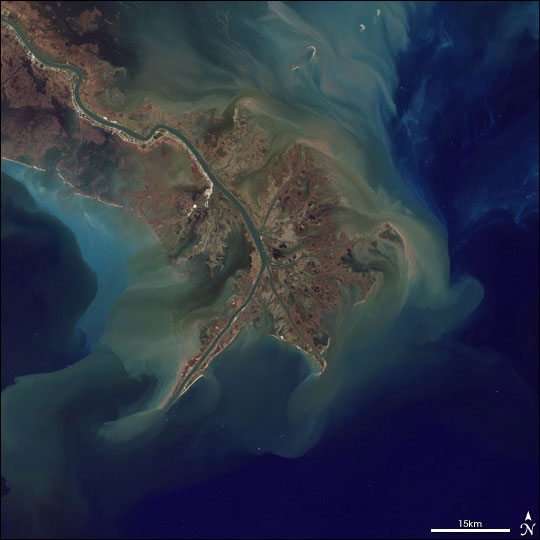 The dead zone in the Gulf of Mexico threatens commercial and recreational fisheries. In 2001, a special task force – called the Mississippi River Gulf of Mexico Watershed Nutrient Task Force – set a goal to reduce the 5-year average size of the dead zone to less than 1,900 square miles by the year 2015. They have not succeeded. Over the past 5 years, the size of the dead zone has averaged 5,176 square miles, and it’s larger-than-average this year. 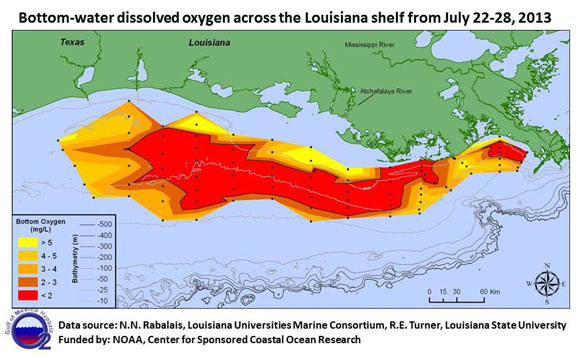 Nancy Rabalais, executive director of the Louisiana Universities Marine Consortium (LUMCON) and leader of the cruise, said in a press release:

A near-record area was expected because of wet spring conditions in the Mississippi watershed and the resultant high river flows which deliver large amounts of nutrients. But nature’s wind-mixing events and winds forcing the mass of low oxygen water towards the east resulted in a slightly above average bottom footprint.

Despite the smaller-than-predicted size of the dead zone in 2013, this year’s dead zone is still much larger than the target goal set by the nutrient task force. Robert Magnien, director of NOAA’s Center for Sponsored Coastal Ocean Research, remarked that additional work needs to be done to reduce nutrient inputs to the Gulf. He said:

NOAA’s investment in the Gulf of Mexico continues to yield results that confirm the complex dynamics of hypoxia and provide managers and the public with accurate scientific information for managing and restoring the nation’s valuable coastal resources. For those who depend upon and enjoy the abundant natural resources of the Gulf of Mexico, it is imperative that we intensify our efforts to reduce nutrient pollution before the ecosystem degrades any further.

Results from the Gulf Hypoxia Action Plan 2008 show that while there has been a 21% decline in nitrogen loads from 2001–2005 compared to earlier years, phosphorous loads have increased by 12% over this timeframe. 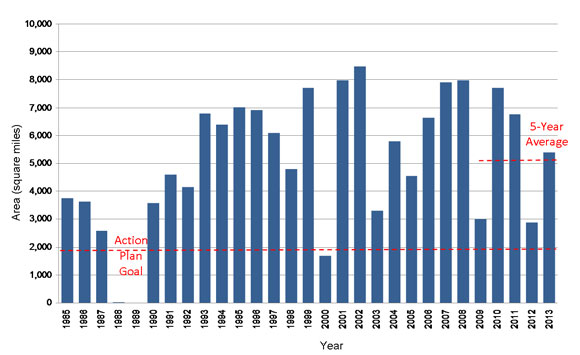 Bottom line: The oxygen-depleted dead zone that forms each summer in the Gulf of Mexico has reached 5,840 square miles in size, according to NOAA-supported scientists. The large size of the dead zone in 2013 is partly due to wet spring conditions in the Mississippi watershed, which have increased the amount of nutrient runoff that can trigger algae blooms. Scientists and natural resource managers are continuing to work on ways to reduce nutrient runoff in the watershed.

NOAA and others expect 2013 hurricane season to remain active