Spring floods across the Midwest are expected to contribute to a very large and potentially record-setting 2013 Gulf of Mexico “dead zone”, according to researchers.

Spring floods across the Midwest are expected to contribute to a very large and potentially record-setting 2013 Gulf of Mexico “dead zone,” according to a University of Michigan ecologist and colleagues who released their annual forecast today, along with one for the Chesapeake Bay.

The Gulf forecast, one of two announced by the National Oceanic and Atmospheric Administration, calls for an oxygen-depleted, or hypoxic, region of between 7,286 and 8,561 square miles, which would place it among the 10 largest on record.

The low end of the forecast range is well above the long-term average and would be roughly equivalent to the size of Connecticut, Rhode Island and the District of Columbia combined. The upper end would exceed the largest ever reported (8,481 square miles in 2002) and would be comparable in size to New Jersey. 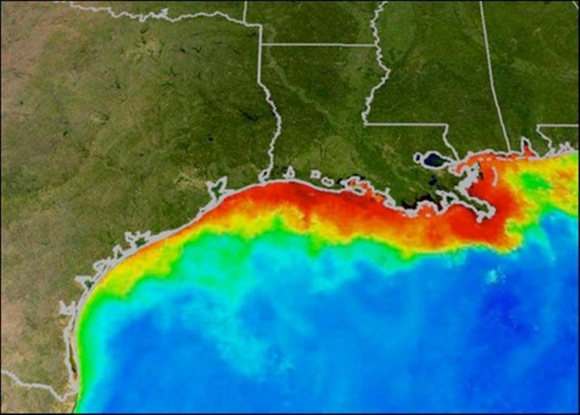 An oxygen-starved hypoxic zone, commonly called a dead zone and shown in red, forms each summer in the Gulf of Mexico. Fish and shellfish either leave the oxygen-depleted waters or die, resulting in losses to commercial and sports fisheries. Credit: NOAA

Farmland runoff containing fertilizers and livestock waste, some of it from as far away as the Corn Belt, is the main source of the nitrogen and phosphorus that cause the annual Gulf of Mexico hypoxic zone. In its 2001 and 2008 action plans, the Mississippi River/Gulf of Mexico Watershed Nutrient Task Force, a coalition of federal, state and tribal agencies, set the goal of reducing the five-year running average areal extent of the Gulf hypoxic zone to 5,000 square kilometers (1,950 square miles) by 2015.

Little progress has been made toward that goal. Since 1995, the Gulf dead zone has averaged 5,960 square miles, an area roughly the size of Connecticut.

“The size of the Gulf dead zone goes up and down depending on that particular year’s weather patterns. But the bottom line is that we will never reach the action plan’s goal of 1,950 square miles until more serious actions are taken to reduce the loss of Midwest fertilizers to the Mississippi River system, regardless of the weather,” said U-M aquatic ecologist Donald Scavia, director of the Graham Sustainability Institute, who contributes to both the Gulf and Chesapeake Bay forecasts.

This year’s Chesapeake Bay forecast calls for a smaller-than-average dead zone in the nation’s biggest estuary. The forecast from Scavia and University of Maryland researchers has three parts: a prediction for the mid-summer volume of the low-oxygen hypoxic zone, one for the mid-summer oxygen-free anoxic zone, and a third that is an average value for the entire summer season. 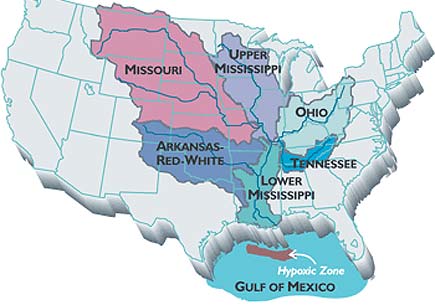 Farmland runoff containing fertilizers and livestock waste, some of it from as far away as the Corn Belt, is the main source of the nitrogen and phosphorus that cause the annual Gulf of Mexico “dead zone.” Image credit: Donald Scavia

The annual Gulf forecast is prepared by researchers at U-M, Louisiana State University and the Louisiana Universities Marine Consortium. The Bay forecast is provided by U-M and the University of Maryland’s Center for Environmental Science. Both studies are funded by NOAA.

The forecasts are based on nutrient runoff and river-and-stream data from the U.S. Geological Survey, which are then fed into computer models developed with funding from NOAA’s National Centers for Coastal Ocean Science.

“Monitoring the health and vitality of our nation’s oceans, waterways and watersheds is critical as we work to preserve and protect coastal ecosystems,” said Kathryn Sullivan, acting undersecretary of commerce for oceans and atmosphere and acting NOAA administrator. “These ecological forecasts are good examples of the critical environmental intelligence products and tools that help shape a healthier coast, one that is so inextricably linked to the vitality of our communities and our livelihoods.”

Floods inundated much of the Midwest this spring. Several states, including Minnesota, Wisconsin, Illinois and Iowa, had spring seasons that ranked among the 10 wettest on record. Iowa had its wettest spring on record, with 17.61 inches of precipitation, according to the National Climatic Data Center.

Nutrient-rich runoff from those farming states ends up in the Mississippi River and eventually makes its way to the Gulf. The amount of nitrogen entering the Gulf of Mexico each spring has increased by about 300 percent since the 1960s, mainly due to increased agricultural runoff.

According to U.S. Geological Survey estimates, 153,000 metric tons of nutrients flowed down the Mississippi and Atchafalaya rivers to the northern Gulf in May 2013, an increase of 94,900 metric tons over last year’s drought-reduced 58,100 metric tons. The 2013 input is 16 percent higher than the average nutrient load estimated over the past 34 years.

In the Gulf and the Bay, the nutrient-rich waters fuel explosive algae blooms. When the algae die and sink, bottom-dwelling bacteria decompose the organic matter, consuming oxygen in the process. The result is a low-oxygen (hypoxic) or oxygen-free (anoxic) region in the bottom and near-bottom waters: the dead zone.

Fish and shellfish either leave the oxygen-depleted waters or die, resulting in losses to commercial and sports fisheries. In the Gulf, the dockside value of commercial fisheries was $629 million in 2009, and nearly 3 million recreational anglers contributed more than $1 billion to the region’s economy.

Chesapeake Bay dead zones, which have been highly variable in recent years, threaten a multi-
year effort to restore the bay’s water quality and to enhance its production of crabs, oysters and other fisheries. The Geological Survey estimates that 36,600 metric tons of nitrogen entered the estuary from the Susquehanna and Potomac rivers from January through May, which is 30 percent below the average loads estimated between 1990 and 2013.

The final Chesapeake Bay measurement will be released in October following surveys by the Maryland Department of Natural Resources and the Virginia Department of Environmental Quality.

The 2013 Gulf estimate is based on the assumption of no significant tropical storms in the two weeks preceding or during the official measurement survey cruise scheduled from July 25 to Aug. 3. If a storm does occur, the size estimate could drop to a low of 5,344 square miles, slightly smaller than Connecticut.

Last year’s Gulf dead zone was the fourth-smallest on record, due to drought conditions, and covered about 2,889 square miles, an area slightly larger than Delaware.