NOAA and others expect 2013 hurricane season to remain active

NOAA is still predicting that the 2013 Atlantic hurricane season will remain above average with 13-19 named storms.

The National Oceanic and Atmospheric Administration (NOAA) has released an updated look at the 2013 Atlantic hurricane season. They believe this year’s hurricane season will remain fairly active with a 70% chance of seeing 13-19 named storms, 6-9 hurricanes, and 3-5 of those hurricanes becoming major hurricanes. These outlooks are based on weather trends and climate indicators that can show whether or not conditions are favorable for tropical development. 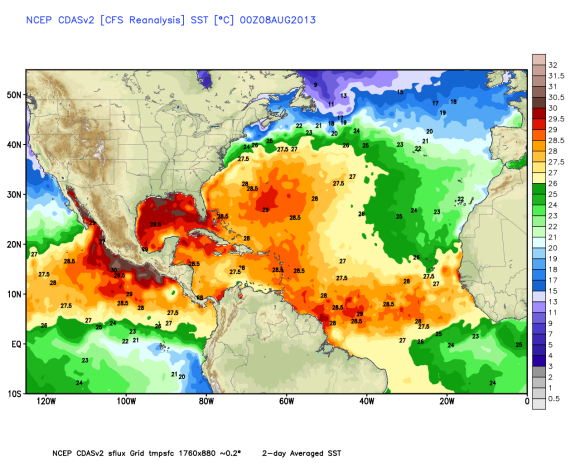 Gerry Bell, Ph.D., who is lead seasonal hurricane forecaster at NOAA’s Climate Prediction Center, believes the Atlantic will likely have above average activity for the remainder of the season. Hurricane season ends on November 30, 2013. Bell said:

Our confidence for an above-normal season is still high because the predicted atmospheric and oceanic conditions that are favorable for storm development have materialized. Also, two of the four named storms to-date formed in the deep tropical Atlantic, which historically is an indicator of an active season.”

The Saharan air layer (red and orange colors) prevents tropical cyclones from developing due to the dry air pushing off the coast of Africa. In late July and early August, an intense surge of dry, Saharan dust spread westward from Africa, bringing conditions highly unfavorable for tropical cyclone development. The dust is now expected to die down, meaning hurricanes are more likely. Image via Meteosat, via University of Wisconsin (CIMSS)

So far, 2013 has not recorded a hurricane in the Atlantic basin. The majority of the storms have had a difficult times strengthening into a 74-mile-per-hour storm. But a specific condition, which now appears to be ending, probably helped prevent Atlantic hurricanes earlier this summer. For late July and early August, an intense surge of dry, Saharan dust spread westward from Africa, bringing conditions highly unfavorable for tropical cyclone development. The dust is now expected to die down, and hurricane conditions are likely to become more favorable as we enter the peak of the hurricane season, which occurs from mid-August to early October.

We are currently pushing into the peak of the Atlantic hurricane season, which is typically from mid-August to early October. Image via National Hurricane Center

NOAA is not the only group that agrees that the remainder of the 2013 hurricane season will have above average activity. Leading researchers Dr. Philip J. Klotzbach and Dr. William M. Gray from Colorado State also believe there will an above-average probability for a United States or Caribbean major hurricane landfall this year. Klotzbach and Gray said they are expecting roughly 14 named storms (average is 10.5), 8 hurricanes (average is 5.5), and 3 major (Category 3-4-5) hurricanes (average is 2.0). They were more aggressive with their numbers right before the start of the season, but have dropped them slightly thanks to an anomalous cooling of sea surface temperatures in the tropical and subtropical eastern Atlantic. 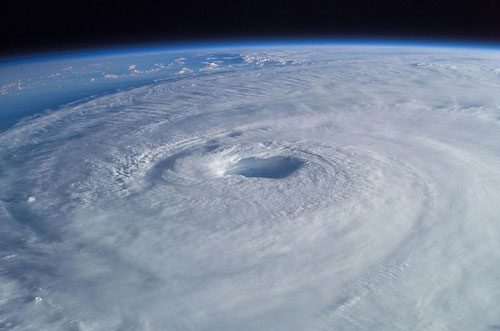 A view of Hurricane Isabel from the International Space Station captured by Astronaut Ed Lu. Image via Mike Trenchard, NASA.

Bottom line: NOAA is still predicting that the 2013 Atlantic hurricane season will remain above average with 13-19 named storms. The last time the United States had a major hurricane hit its coast was on October 2005, when Hurricane Wilma hit parts of southwest Florida. It only takes one bad storm to make the entire season memorable. With that said, now is a good time to prepare for hurricanes, especially if you live along the coast.