Irene, the first hurricane of the 2011 Atlantic hurricane season, formed on August 20. Meteorologists expect it to impact the Southeast U.S. later this week.

Update: Who will be impacted by powerful Hurricane Irene?

Irene, the ninth named storm and first hurricane of the 2011 Atlantic hurricane season, immediately formed on August 20, 2011 after hurricane hunters investigated a strong tropical wave (ex-97L) in the eastern Caribbean.

The last time we had nine named storms in the Atlantic Basin prior to August 20, was set back in the years of 1936 and 2005. In other words, 2011 is the 3rd most active Atlantic hurricane season up to now since record keeping began.  Irene is going to impact the Southeast United States later this week, and now is the time to be prepared. 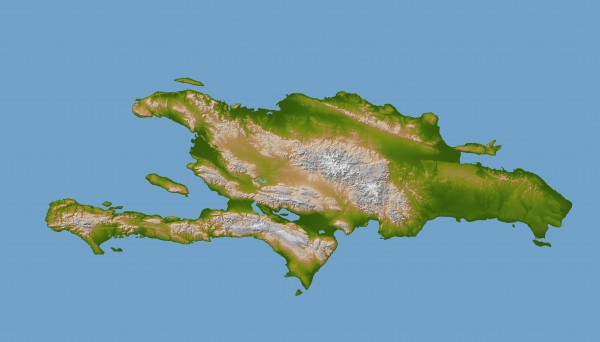 Topography of Hispaniola. The flatter land on the north side of the island will benefit Irene as the storm moves north of the island. Image Credit: NASA

Irene is a storm that should be taken seriously.  If you live along the southeast coast, please have a plan ready.  The intensity forecast for Irene is dependent on the track the storm takes.  Irene is now forecasted to move north of Hispaniola, which is great news for them. However, that’s horrible news for the United States.  If Irene moves north of Hispaniola, then the storm will remain over warm waters and the mountainous terrain will not disrupt the organization of the cyclone as much.  The water temperatures over the Bahamas are extremely warm, and conditions should remain favorable for Irene to steadily strengthen into a major hurricane (winds over 110 mph). 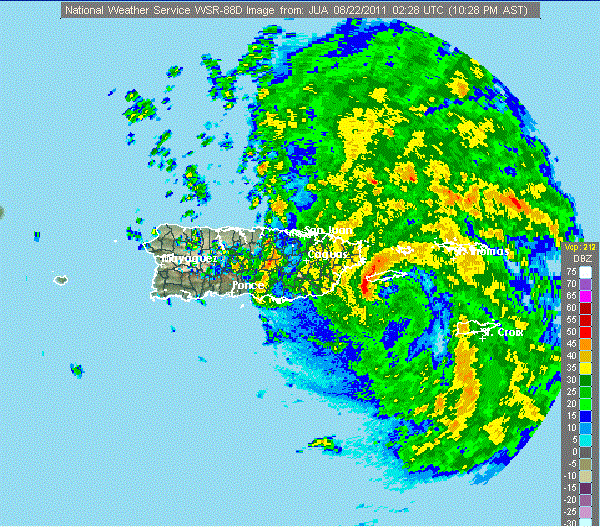 Irene made landfall as an intensifying tropical storm with 70 mile per hour winds across Puerto Rico early Monday morning.  Irene has already had a huge impact across Puerto Rico.  So far, over 800,000 homes are without power with widespread trees and powerlines down.  Major hurricane force winds (over 110 mph) are being felt on higher elevations across the island.  The picture above shows the last image of Irene approaching Puerto Rico before the power went out.  Here’s the message regarding the loss of radar in Puerto Rico:

THE FAA SAN JUAN WSR-88D DOPPLER WEATHER RADAR (TJUA) HAS GONE
DOWN…MOSTLY LIKELY DUE TO A LOSS OF POWER AT THE CAYEY RADAR
SITE…AS RAIN BANDS ASSOCIATED WITH TROPICAL STORM IRENE MOVED
ACROSS THAT AREA. WE ARE UNABLE TO RESTART THE RADAR AT THIS TIME
AND FAA AOCC HAS BEEN NOTIFIED. RESTORATION TIME IS UNKNOWN.

Here is the projected path from the National Hurricane Center (NHC): 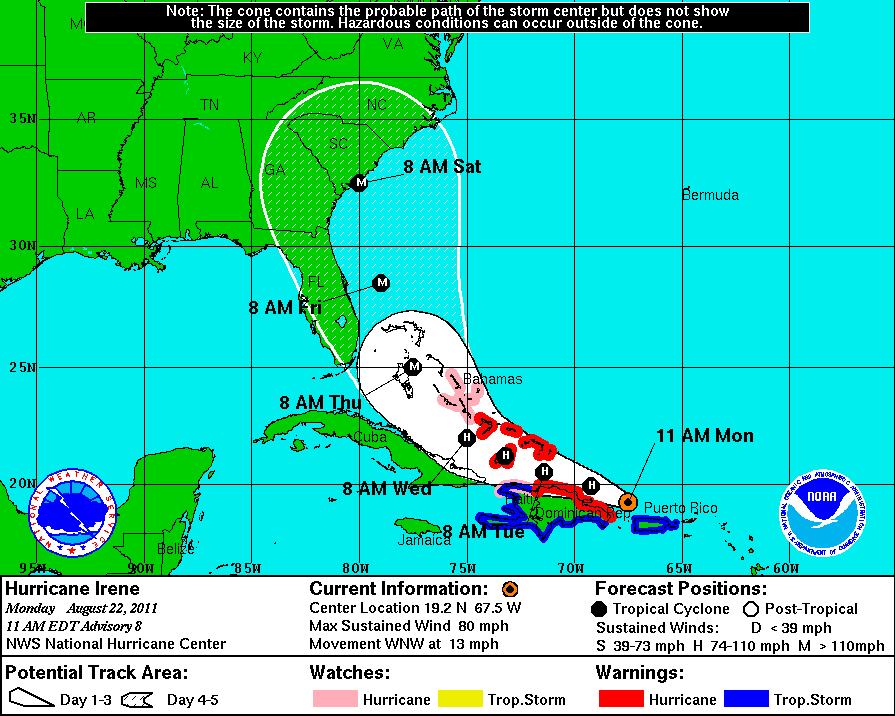 Forecast track of Hurricane Irene from the NHC. The

It is important to note the cone of uncertainty.  Do not rely on the center track because the storm can deviate west or east from the track.  The reason Irene is heading towards the United states relies on the upper air pattern.  Areas of high pressure across the central United States and in the mid-Atlantic will guide Irene’s track.  In between these two ridges, there’s a weakness that Irene will likely feel that will take the storm up to into the southeast coast.  In between these two ridges, a trough of low pressure is moving northeast out of the region.  The forecast relies heavily on how strong the trough is, and if the high pressure systems weaken or move.  In my opinion, the storm will likely be pushed east.   NHC has Irene becoming a strong category two hurricane with winds of 110 mph in 120 hours.  The gulf stream, which is centered in the Gulf of Mexico,  moves south of the Florida peninsula and pushes north around the southeast coast.  The gulf stream can provide very warm ocean temperatures that can help strengthen Irene. 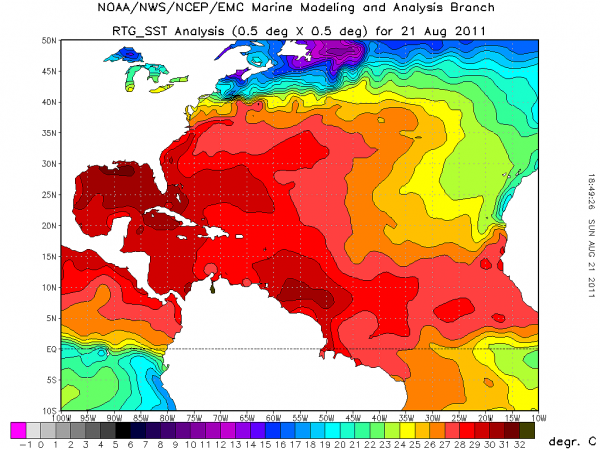 Here’s the spaghetti models showing the possible tracks of Irene:

Here’s a look at a few model runs from GFS and ECMWF (European).  Models are never the final answer to a track or intensity of a storm.  Forecasters never rely on one model run as they change constantly throughout the day.   Florida, Georgia, and the Carolinas are all possible areas that could be impacted by Irene.  When Irene approaches landfall, pay attention to the northeast quadrant of the storm.  The strongest winds, tornadoes, and greatest storm surge (which will move into the coast) will be found in this quadrant.  As Irene moves north, the storm will likely produce very heavy rains along the entire eastern coast (including Washington DC and New York City).  Flooding could be a concern as Irene tracks north early next week.  In the maps below, you will see pressure readings showing the possible intensity of the storm.  The lower the pressure (millibars), the stronger the storm will become.  Note:  Hurricane Andrew had a pressure of 922 mb and Hurricane Hugo had a pressure reading of 918 mb.

It is important to follow the National Hurricane Centerfor the latest forecast tracks.  They should be the only people you listen to for possible hurricane impacts.  Private sector agencies might provide their hurricane tracks and insight, but the NHC rules supreme.  The NHC has actually asked the National Weather Services along the eastern US to release upper air balloons every six hours (instead of every 12 hours) starting this evening so they can get a better measurement on the atmosphere. By doing so, the NHC will have better data , which will aid in making precise forecasts.  Personally, I believe the Carolina’s are the biggest threat for Irene.  Since Irene is a large storm, tropical storm winds (39 mph to 73 mph) will likely be felt across the eastern coast of Florida.  Everyone along Florida, Georgia, and the Carolina’s should monitor Irene.

Overall: Hurricane Irene is a category one hurricane and moving west-northwest towards the Bahamas.  Irene’s forecast is to strengthen into a  major hurricane with winds over 110 mph. Everyone in the southeast needs to have a plan in case evacuations are made.  Irene has the potential to become a major hurricane.

I’ll have another post later this week as Irene approaches the United States.