Migrating Arctic shorebirds may play an important role in the long-distance dispersal of mosses and liverworts to remote regions in North and South America.

Scientists have long known that birds can play an important role in dispersing plants across nearby fields and forests, and even across continents, but they are unsure just how far these plants can spread. Now, new research on migrating Arctic shorebirds in North America has confirmed that these birds do inadvertently pick up plant fragments that may accompany them on their long journeys to wintering grounds in South America. The research was published on June 12, 2014 in the journal PeerJ.

Three species of Arctic shorebirds including the American golden-plover, the semipalmated sandpiper, and red phalaropes were found to have diaspores—a plant dispersal unit that may contain seeds or spores—attached to their feathers. These birds dig out nests in the ground that are often lined with plants, and hence, they inadvertently pick up plant fragments and carry them around. 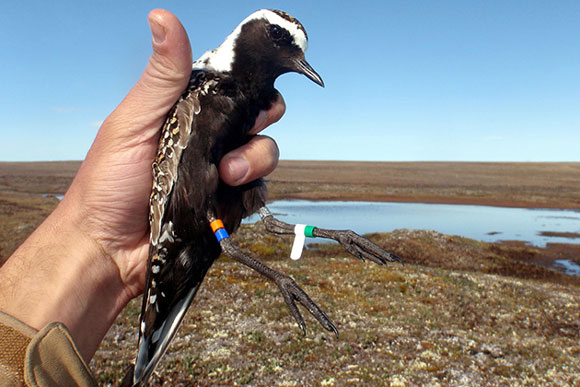 Lily Lewis, lead author of the new study, is a Ph.D. student in the Department of Ecology and Evolutionary Biology at the University of Connecticut. She commented on the study in a press release:

Mosses are especially abundant and diverse in the far northern and southern reaches of the Americas, and relative to other types of plants, they commonly occur in both of these regions, yet they have been largely overlooked by scientists studying this extreme distribution. Mosses can help to illuminate the processes that shape global biodiversity.

The scientists think that these Arctic shorebirds, which travel long distances across the hemispheres, may play an important role in spreading bryophytes such as mosses and liverworts to remote regions. The next step in their research will be to determine if the plant fragments that they recovered from the bird feathers can remain viable for long periods of time. If the diaspores do remain viable, their research could help to explain why similar plant species are found in both the northern and southern tips of the Americas. 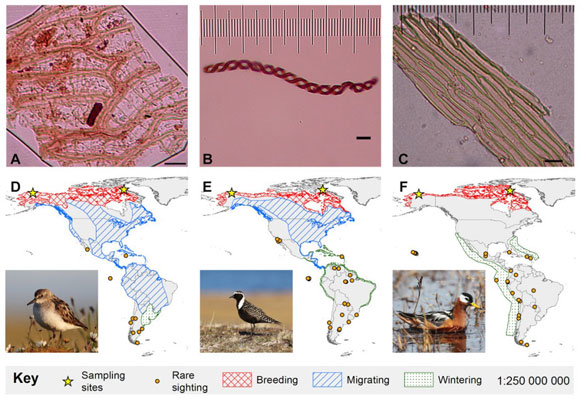 Images of bryophyte diaspores found in the feathers of migrating Arctic sandpipers, plovers and red phalaropes. Image appears courtesy of the University of Connecticut.

Funding for the research was provided by the University of Connecticut Katie Bu Memorial Fund, a Switzer Environmental Fellowship, and the National Science Foundation.

Bottom line: New research published in the journal PeerJ on June 12, 2014 has discovered bryophyte diaspores in the feathers of migrating Arctic shorebirds. It is possible, the scientists say, that these birds play an important role in the long-distance dispersal of mosses and liverworts to remote regions in North and South America.

How birds fly in V formation