How birds fly in V formation

A new study says birds precisely time when they flap their wings, and position themselves to capture upwash (“good air”) and avoid downwash or (“bad air”). 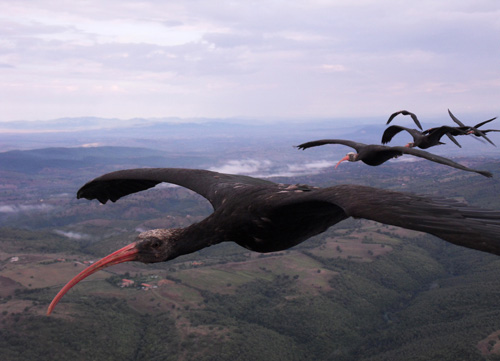 Birds flying in a distinctive V formation strategically position themselves in aerodynamically optimum positions, and experience positive aerodynamic interactions that maximize upwash (“good air”) capture, according to a study the journal Nature by researchers at Royal Veterinary College, University of London.

The data, captured from free-flying migrating birds using specially developed GPS technology, reveals the mechanisms by which birds flying in V formation can both use areas of beneficial upwash while avoiding regions of detrimental downwash (“bad air”).

These aerodynamic accomplishments were previously not thought possible for birds because of the complex flight dynamics and sensory feedback that would be required to perform such a feat.

Dr. Steven Portugal is lead researcher at the Royal Veterinary College. He said:

The intricate mechanisms involved in V formation flight indicate remarkable awareness and ability of birds to respond to the wingpath of nearby flock-mates. Birds in V formation seem to have developed complex phasing strategies to cope with the dynamic wakes produced by flapping wings.

Dr. Portugal and his team studied a free-flying flock of northern bald ibises (Geronticus eremita), a critically endangered species. They equipped 14 juvenile birds with back-mounted synchronised GPS and inertial measurement devices. The team recorded the position and every wing flap of all individuals within the V during 43 min of migratory flight. The precision of these measurements allowed the relative positioning of individuals in a V to be tracked, and the potential aerodynamic interactions to be investigated at a level and complexity not previously feasible.