The Lagoon – aka M8 – is the largest and brightest nebula, or cloud in space, in the vicinity of the Teapot asterism in the constellation Sagittarius. 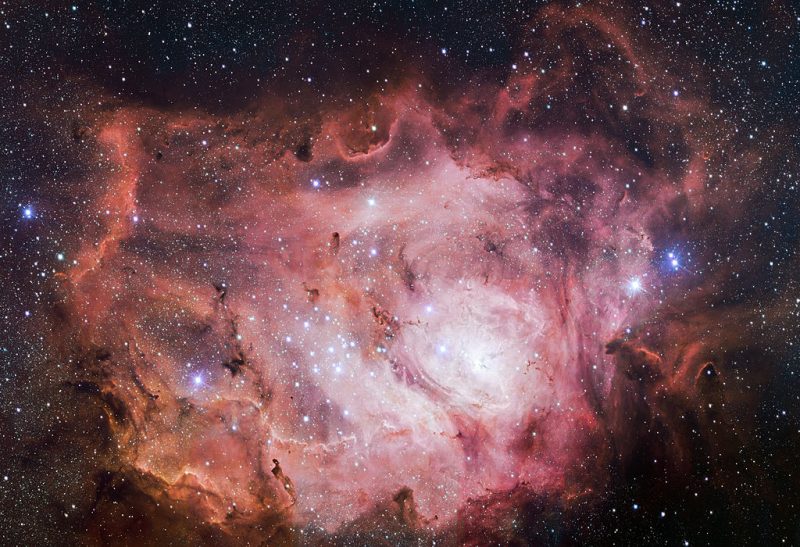 This is Messier 8 aka M8 or the Lagoon Nebula, as captured by the VLT Survey Telescope at ESO’s Paranal Observatory in Chile. This giant cloud of gas and dust is creating intensely bright young stars, and is home to young stellar clusters. Through your binoculars, the cloud won’t look so detailed, but it is still very beautiful. Image via ESO/VPHAS+ team/Messier-Objects.com.

The Lagoon Nebula, also known as M8 or Messier 8, is a large gas cloud within our Milky Way galaxy, barely visible to the human eye under good conditions, but glorious with a dark sky and a bit of optical aid. So bring your binoculars and look for M8 a few degrees above and to the right of the Teapot asterism in the constellation Sagittarius.

Visually about three times the size of the full moon, the Lagoon Nebula is the largest and brightest of a number of nebulosities in and around Sagittarius. It’s widely visible throughout the populated areas of North America, and, due to its location in the sky (-24 degrees declination), observers farther south see it even higher in the sky, which is better for observing.

How can you find it? First, be sure you’re looking on a dark night, from a rural location. Visit EarthSky’s Best Places to Stargaze page to find a good viewing location near you.

Then, look for the constellation Sagittarius, which marks the direction of the center of our Milky Way galaxy. You’ll be looking southward in the evening from Earth’s Northern Hemisphere. If you’re in Earth’s Southern Hemisphere, look northward, closer to overhead, and turn the charts below upside-down. Want a more exact location for Sagittarius? We hear good things about Stellarium, which will let you set a date and time from your exact location on the globe. 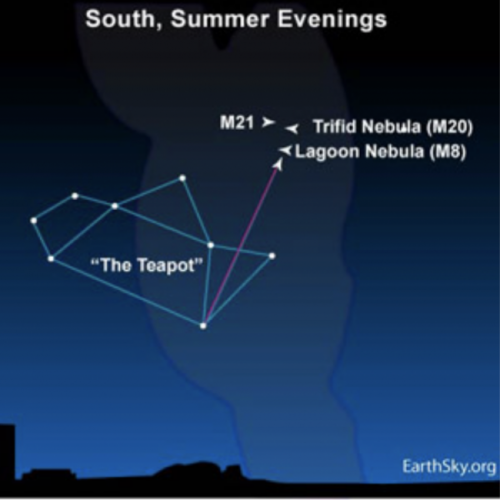 You’ll find M8 in a dark sky near the spout of the Teapot in Sagittarius. Notice the 3 westernmost (right-hand) stars of the Teapot spout … then get ready to star-hop! Use binoculars and go about twice the spout’s distance upward until a bright hazy object glares at you in your binoculars. That’s the Lagoon Nebula (Messier 8, or M8), which is actually visible to the unaided eye on a dark, moonless night. For reference, keep in mind that a binocular field commonly spans 5 to 6 degrees of sky. Here’s more about the Teapot. 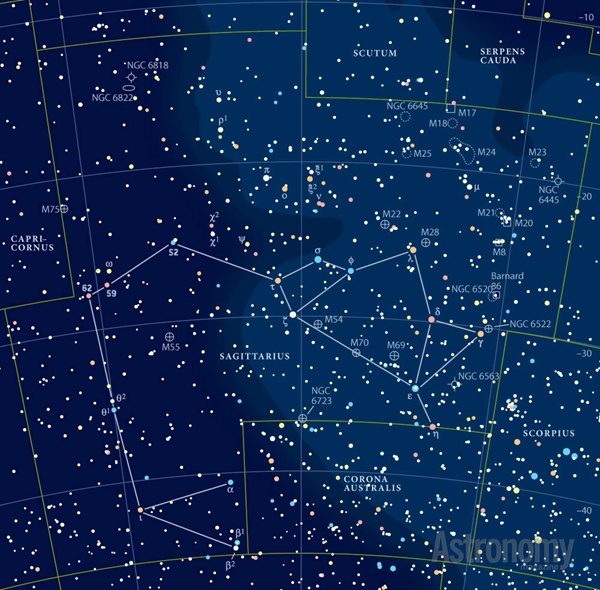 Chart showing one of the most star-rich regions of the Milky Way galaxy, toward the galaxy’s center, in the direction of the constellation Sagittarius. If you look closely, you can pick out M8 on this chart. A line drawn from Phi Sag through Lambda Sag and onward approximately as far as those two stars are apart will lead the general area of M8. Chart via astronomy.com.

As just a very faint patch to the unaided eye, the nebula takes on an oblong shape in binoculars. A brighter nucleus (the so-called “hourglass”) is visible on one side, separated by a dark rift from an open star cluster on the other side. Unlike the published timed-exposure photographs, to the unaided eye the faint nebulosity appears grayish with little if any hint of color.

M8 is about 5,000 light-years away, and roughly 130 light years across in the longer dimension. Composed primarily of hydrogen, much of it ionized (heated or energized) by radiation from the nearby superstar Herschel 36, M8 is known as an emission nebula. As such it also is a star-forming region, or stellar nursery, a place where new stars are being born. There is an open star cluster, NGC 6530, of young, hot, blue stars probably only a few million years old, in this region. In addition to these young stars, there are also many dark “Bok” globules of condensing gas and dust on their way to becoming “protostars” and ultimately full-fledged stars like those already formed nearby.

While the fanciful name Lagoon might suggest a mythical origin, there is no known mythology associated directly with this interstellar cloud. The name apparently refers to the shape with the dark lane through the middle, not unlike two lagoons separated by a sandbar. While visible to the unaided eye and therefore certainly seen in antiquity, there is no known mention of this nebula until 1654, when Sicilian astronomer Giovanni Battista Hodierna recorded his observations of the star cluster within the nebula.

The area was observed by several other astronomers, including Charles Messier in 1764, after which it ultimately also became known as Messier 8, or M8, the eighth object in Messier’s catalog. 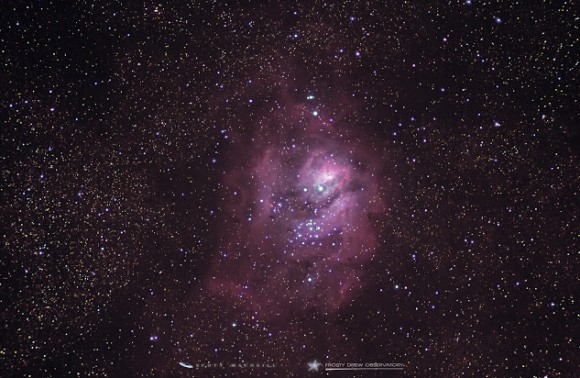 Scott MacNeill captured this beautiful photo of M8 in August 2014. He wrote, “Here’s a fantastic capture of M8 – The Lagoon Nebula I shot at Frosty Drew Observatory in Charlestown, Rhode Island, USA … I focused on M8 for a while as it was looking so sexy!”

Bottom line: The Lagoon Nebula, aka M8, is the largest and brightest of a number of nebulosities in and around the famous Teapot asterism in the constellation Sagittarius.

Read more: Find the Teapot, and look toward the galaxy’s center