Venus will sweep near the sun in our sky (inferior conjunction) on October 26. Astronomer Guy Ottewell uses his great skill at illustration to compare this passage of Venus with the last one, and the next one. 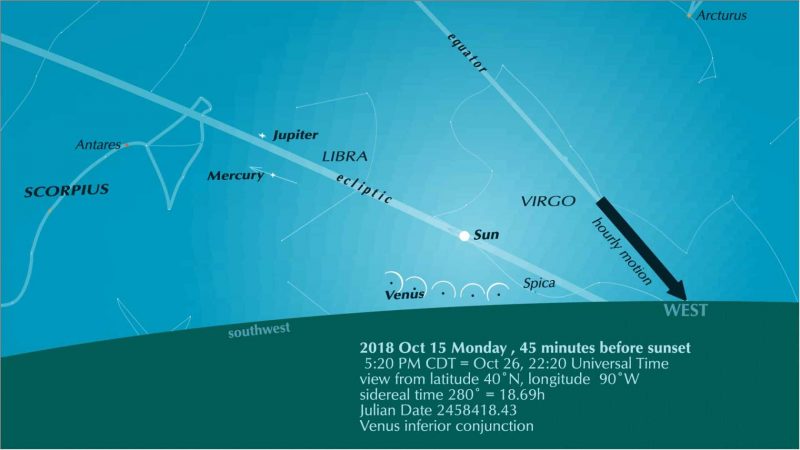 Illustration of Venus in the daytime sky – shown over a span of some days around the time Venus will sweep near the sun in our sky at inferior conjunction on October 26, 2018. This is a tough one to see from the Northern Hemisphere! Illustration via Guy Ottewell’s blog.

The phenomenon is called the planet’s inferior (“lower”) conjunction. It happens each 19 1/2 months (five times in each of the famous Venus 8-year cycles). And each of these five recurring occasions has its sharply different character – different ways of looking on our sky’s dome – because of happening at a different position in the orbits of Venus and Earth around the sun. On this page, you’ll find three pictures of the scene just before sunset. One is for the present passage of Venus on October 26, 2018 (see above). The next is for the previous passage of Venus on March 25, 2017 (see below). And the third illustration (bottom of the page), is for the next Venus passage on June 3, 2020.

In 2018-like years – as illustrated by the chart at top – Venus sneaks by, 6 degrees south of the sun, so that the best opportunities for viewing are for Southern Hemisphere observers.

In 2017-like years, Venus hurtles 8 degrees north of the sun, so that careful observers (masking out the sun) get a chance to spot it around sunset near to or even on the day of conjunction.

Note that – in all of these illustrations – the slender sun-illuminated crescent of Venus is exaggerated 150 times in size; the dot at the center of the crescent is the planet’s actual position (and nearer to its real size). The sun is exaggerated only twice in size. You won’t see the details other than the sun and – hopefully – Venus, but they tell you the way you’re looking into the solar system and the universe. 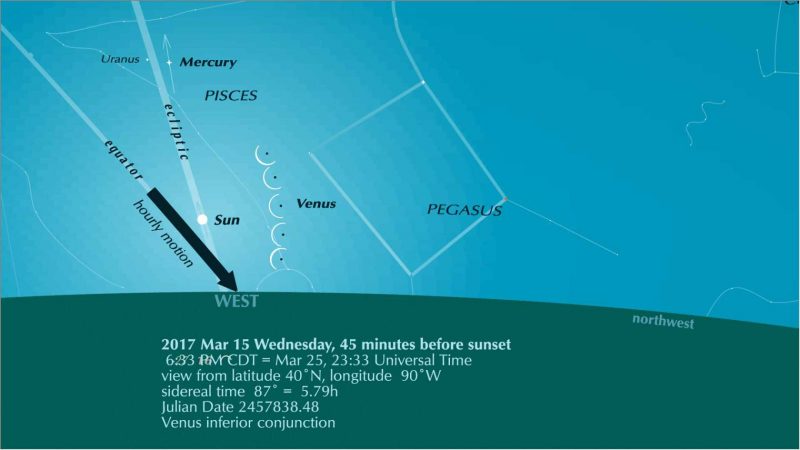 Illustration of Venus and the sun in the daytime sky, around the time of Venus’ inferior conjunction on March 25, 2017. From the Northern Hemisphere, we might have seen Venus near to or even on the day of conjunction. Illustration via Guy Ottewell’s blog. 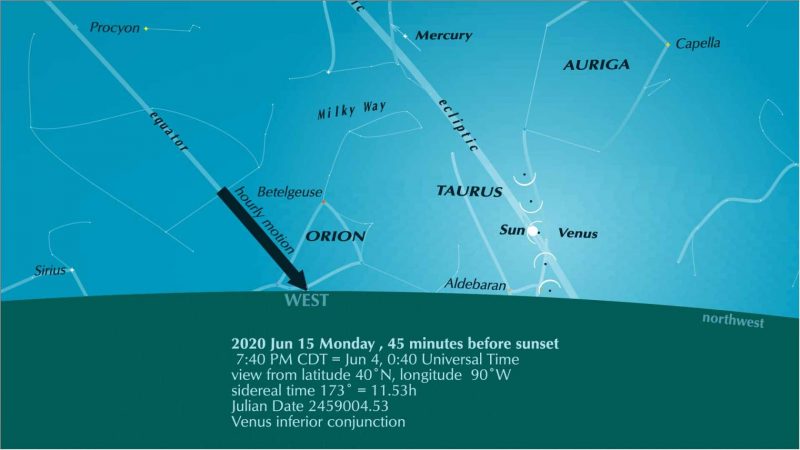 Illustration of Venus and the sun in the daytime sky, around the time of Venus’ inferior conjunction on June 3, 2020. Venus comes near to passing between us and the sun directly, creating a transit of Venus, as happened in 2012. Illustration via Guy Ottewell’s blog.

Bottom line: Three illustrations – one from 2017, one from 2018 and one from 2020 – show the different character of Venus’ passages between us and the sun at inferior conjunction.