The 8-year cycle and 5 ‘petals’ of Venus

A word about the 8-year cycle of Venus in our sky and about the “pentagram” of Venus, a highly noticeable rhythm in the motion of Venus as viewed from an Earth-centered perspective. 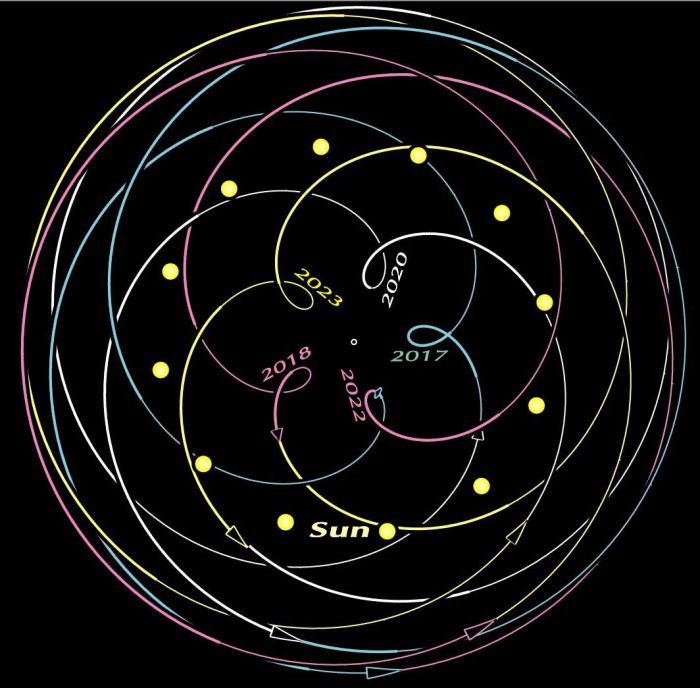 Article written and published originally by Guy Ottewell at his blog. Re-printed here with permission.

When plotted geocentrically – from an Earth-centered perspective – there is a highly noticeable rhythm in the motion of Venus. After eight years, it returns to the same place in our sky on about the same date. This is known as the eight-year cycle of Venus, and stems from the fact that 13 Venusian orbits (8 x 224.8 days) very nearly equals eight Earth years. The cycle was known to, and of great interest to, ancient peoples such as the Maya. Today, many know it as the pentagram of Venus.

The word pentagram – or five-sided figure – is used because, over the eight years, each phenomenon – each relative position of Earth, Venus, and the sun – occurs five times. Then, over the next eight years, they repeat five times almost identically.

For Venus, the tight inward loops on the diagram above and animation below are the planet’s inferior conjunctions, in which Venus passes between us and the sun. The wide swings are centered on the superior conjunctions, when Venus passes around the far side of the sun from us. So the general pattern is (as Anthony Barreiro commented):

The tight loops are the stamens of the rose, the wide swings are the petals.

Below is an animation, showing the same thing … the orbit of Venus from an Earth-centered perspective. The smaller pale yellow dot is Venus, and the larger yellow ball is the sun:

When I tried to plot a geocentric picture over eight years (2016-2023) to show the complete rose, it was bewilderingly cluttered. It had five overlapping tracks, eight-times-twelve little Venus globes at monthly intervals – already too much without the ecliptic-plane grid and other details.

The image at the top of this post is a more simplified version: still calculated in three dimensions, but, by moving the viewpoint to the north ecliptic pole, it becomes a flat plan of Venus’ path.

Earth is in the middle; the vernal-equinox direction is to the right; the yellow spots are the sun at the beginning of each month.

The rest is the rhythmic motions of Venus.

If you trace across the circle from each loop to the next, you see that they are not adjacent to each other but 2/5 pf the way around, like the five points of a pentagram. 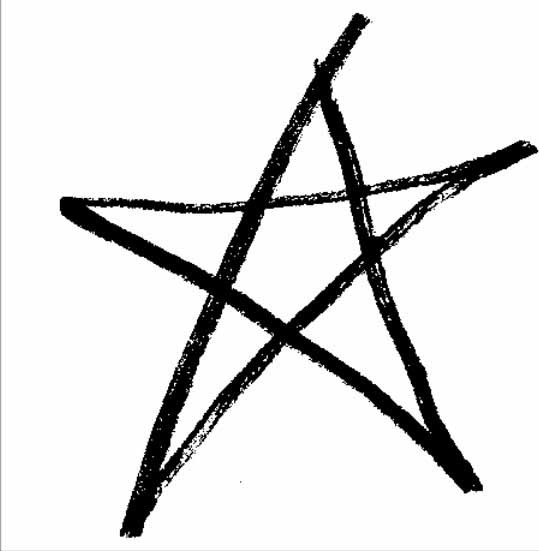 The directions of the five inferior conjunctions of Venus determine their differing characters, by determining their places in Venus’ “true” (heliocentric) orbit, which is tilted and slightly elliptical.

Bottom line: The highly noticeable rhythm in the motion of Venus from a geocentric perspective was famously mentioned in “The Da Vinci Code” by Dan Brown, and is sometimes called the pentagram of Venus. Guy Ottewell provides a beautiful chart and explains more, here.