Posted by
Don Machholz
and

The much-anticipated Tau Herculid meteor shower put on a fine display overnight on May 30-31, 2022, although the hoped-for meteor storm did not materialize. Hourly counts ranged from 10 to 25. The peak of the shower appeared around 5 UTC (midnight CT), as predicted. These meteors were generated during the 1995 breakup of periodic comet 73P/Schwassman-Wachmann 3 (SW3). When a comet breaks up, it litters its orbit with debris. Earth passed through this region of debris Monday night … giving us a chance for a meteor storm. But there were many unknowns, and the storm didn’t happen, although many saw a decent meteor shower. Thanks to all who contributed meteor showers to our community photo page!

The Tau Herculids from Ohio

The Tau Herculids from Canada

The Tau Herculids from North Carolina

The Tau Herculids from Alabama

The Tau Herculids from Arizona

The Tau Herculids from California

The Tau Herculids from Morocco

The Tau Herculids from Florida

The Tau Herculids from Ireland

The Tau Herculids from Puerto Rico

Although there was no meteor storm, the Tau Herculids provided a moderate meteor shower. Images taken from Puerto Rico by the Sociedad de Astronomia del Caribe (Astronomical Society of the Caribbean) show some of the meteors. These are related to the fragmentation of comet 73P/Schwassmann-Wachmann, which spread some particles very close to Earth’ orbit. The meteors were captured on the night of May 30-31, 2022. The SAC said:

Our cameras captured a lot more, but these are just a few of the meteors seen over the island.

The Western Hemisphere had favorable conditions for this event and reports poured in from many locations. Joe Rao, observing from western Arizona, observed 19 meteors in two hours, while his wife Renate saw 26. Joe commented:

The meteors did happen as predicted but not in the numbers that people were hoping for.

EarthSky writer Dave Adalian, observing from near Visalia, California, saw 7 shower member meteors and noted that they had a reddish tint. His skies had a Bortle Rating of 4.5.

Robert Lansford, Association of Lunar and Planetary Observers Meteor Section Recorder and contributor to EarthSky, observed from near the town of Alpine in southern California. He saw about 35 shower meteors and called it a “nice display” and described it as “steady with some bursts.” The brightest meteor he saw was magnitude -2 and appeared copper-colored.

From Don Machholz’ observing location in western Arizona, around the time of the peak, bright meteors increased in numbers as fainter meteors decreased. Don said:

As last weekend began – Friday night, May 27, 2022 – something unexpected occurred concerning the Tau Herculid meteor shower. Meteors began to fall. They were not bright but were picked up by the Cameras for Allsky Meteor Surveillance (CAMS) survey. On May 27, five meteors were detected with enough cameras to determine the radiant. On May 28, seven more shower members were detected. And on May 29, 12 more were seen.

The meteors prior to the main shower were also reported by Denis Vida (@meteordoc on Twitter):

First tau Herculids were detected last night by the #globalmeteornetwork. The geocentric radiant was R.A. = 203.2°, Dec = 17.7 deg based on 17 orbits. The activity seems to be only starting – first detected on May 28, 19h UT with a ZHR ~ 0.3 and not dropping. pic.twitter.com/MoU8CXVRIf

Where did the other meteors come from?

Going into the weekend only three meteor shower peaks were being considered:

Material left over from the comet when it was here in 1892 would be visible on May 30, about 16 UTC.

And material from the breakup of the comet in 1995.  Some predicted this would be a major shower.

The shower caused by the 1892 visit of the comet to our inner solar system materialized per a tweet by Ye Quanzhi.

But what caused the meteors that fell on May 27 through 29? Astronomers had not predicted there would be any and so they will be researching this over the next few months.

As darkness descended over the land on the evening of Monday, May 30, the question remained: Will the debris trail from the 1995 breakup of Periodic Comet 73P/Schwassmann-Wachmann 3 appear in our skies too?

What could possibly go wrong?

For there to have been a good meteor shower overnight on May 30-31, 2022, three key factors must fall into place.

First, a large number of particles must have been expelled from the comet’s nucleus during its 1995 breakup. This appears to have happened, as images taken at that time indicate.

Second, the breakup of the comet would have had to eventually push the material forward in its orbit. As a comet orbits the sun and ejects material, let’s assume that particles go in all directions. Those pushed backward will assume a slower speed and – governed by the laws of gravity – they’ll fall closer to the sun. Since they’re now closer to the sun, they will speed up. And, in time, they’ll pass by the comet on their smaller orbits and get ahead of the comet. Images from the 2006 passage of the comet show:

… Large chunks in a temporary orbit behind one of the larger fragments.

Finally, the comet must eject the material at a speed fast enough to assume this new orbit. A speed of about 60 miles per hour (97 km/hour) is necessary to pull this off. This is faster than typical, but the major outburst and breakup of the comet’s nucleus in 1995 might have been strong enough to produce this speed.

If all three of these conditions had been met, we would have had the perfect storm.

So, since there was not a storm, why not? Astronomers do not know why and will continue to work on understanding just how Periodic Comet 73P/SW3 fragmented in 1995. It makes a difference. What we learn from this comet will help us better understand the next comet we observe breaking apart.

Arnold Schwassmann and Arno Arthur Wachmann of Hamburg Observatory discovered two comets before this one (SW1 in 1927 and SW2 in 1929), not while looking for comets, but instead while conducting a photographic search for asteroids, or minor planets.

But, after its initial discovery in 1930 – despite its relatively short orbit around the sun – no one saw the comet again until 1979. Why not? Astronomers missed SW3 partly because of its intrinsic faintness. And the astronomers were also looking in the wrong place in the sky. Their inaccurate orbital calculations were due to occasional close sweeps of this comet past the giant planet Jupiter. The close passes near mighty Jupiter had changed the comet’s orbit.

And then … people began to see the comet again. With the exception of 1985, astronomers have caught it on every return near the sun since 1979.

In 1995, comet SW3 suddenly brightened by a factor of nearly 7 magnitudes. In other words, the comet suddenly got about 600 times brighter. For a while, it could be seen with the unaided eye.

A month after this outburst, observers using telescopes noticed that the nucleus, or core, of SW3 had split into pieces. They ultimately determined that the comet split into four parts, with two parts disintegrating and two parts remaining, still following the original comet’s orbit around the sun.

By 2006, two things had become clear. First, the comet had by then fragmented into at least 68 pieces.

Second, it was still falling apart.

And that’s where the story of the possible Tau Herculid meteor shower in 2022 gets even more interesting, for earthly observers.

What can we expect at the comet’s 2022 return? We don’t know yet what we’ll see when the comet comes back this year.

Comet 73P/SW3 returned in 2011. But it wasn’t well-placed for observers that year, as it stayed mostly behind the sun. So we didn’t learn from that passage.

In 2017, astronomers observed the main component (C), along with one new fragment (BT).

The nuclei or multiple cores of this comet are small. For instance, the largest part, component C, is only about 0.6 miles, or 1.0 km, in diameter. That’s in contrast to a typical comet nucleus, which is about 6 miles (10 km) wide. 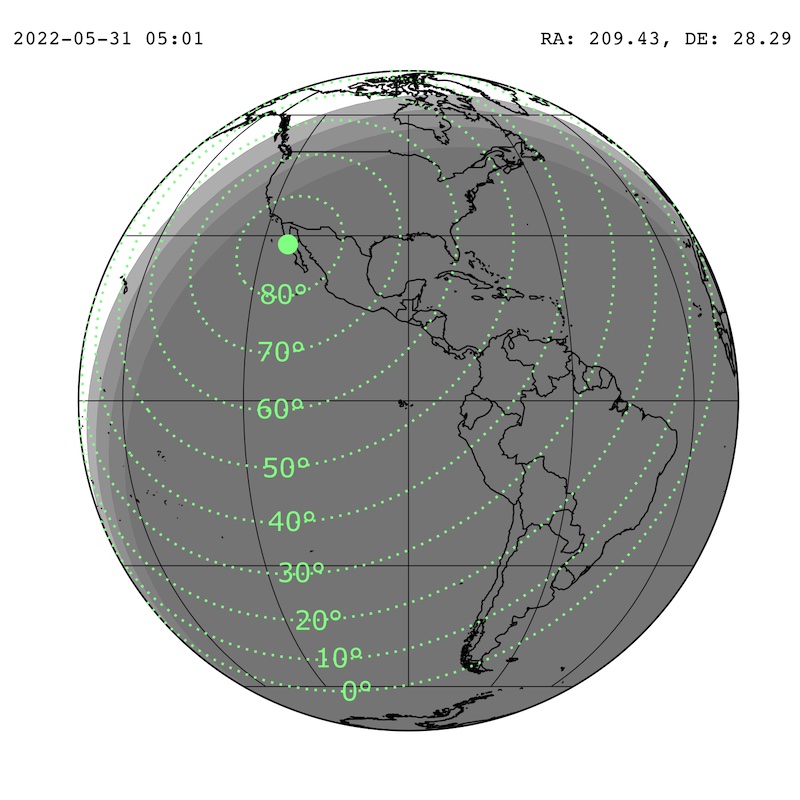 Who saw the meteor shower?

This map above shows the altitude of the Tau Herculid radiant at the predicted peak time for the meteor shower at 5 UTC on May 31, 2022. Image via Jérémie Vaubaillon.

Don became interested in astronomy at age 8. He received his 1st telescope in 1965, a 2-inch (5cm) refractor. Later he received a 6-inch (15 cm) Criterion Dynascope and found all the Messier Objects in one year (1969-70). He began his 1st comet hunting program in 1975 and found his 1st comet in 1978, after 1700 hours of searching. His 2nd comet took an additional 1742 hours. He ultimately discovered a total of 12 comets, which bear his name. In 1978, Don was one of the independent inventors of the Messier Marathon, an attempt to find and view all 110 galaxies, clusters, and nebulae in one night. In the last 40 years of his life, he completed over 50 Messier Marathons and wrote 2 books on the subject. Until the end of his life, in 2022, Don continued his visual comet hunting and Messier Marathons from Arizona, where he lived with his wife Michele.

Thank you! Your submission has been received!
Oops! Something went wrong while submitting the form.
END_OF_DOCUMENT_TOKEN_TO_BE_REPLACED

Raining fish and frogs … for real

Why do meteor showers have a radiant point?