The moon’s appearance in our sky follows a cycle. The cycle of minor lunar standstills diminishes some Hunter’s Moon characteristics in 2016.

The full moon immediately following the full Harvest Moon enjoys the designation of Hunter’s Moon. In 2016, the Northern Hemisphere’s Hunter’s Moon is also a supermoon. So, for all of us around the globe, the upcoming full moon – which will come on the nights of October 15 and October 16 – might look a bit brighter than usual in your sky. Meanwhile, the classic Harvest Moon and Hunter’s Moon characteristic – close-to-sunset rising times for several nights in a row – won’t be as pronounced in 2016, due to a minor lunar standstill.

So we’ll all see a full supermoon on the nights of October 15 and 16, from all parts of the globe. And, like all full moons, this one will rise around sunset. But, like many things in astronomy, the moon’s appearance in our sky follows a cycle. A hallmark of the cycle of minor lunar standstills is that it diminishes the Harvest and Hunter’s Moon effect of rising near the time of sunset for several evenings in a row. It’s affecting these two autumn moons in 2016. In fact, as seen from both earthly hemispheres, it’s affecting autumn moons for several years to come.

Here’s why it happens. Unlike Earth’s moon, many moons in our solar system orbit above the equator of their parent planets. If our moon did likewise – orbited above Earth’s equator – then the moon would always rise due east and set due west every day.

However, our moon orbits Earth on nearly the same plane that Earth orbits the sun (aka the plane of the ecliptic).

Thus, our moon’s orbit is quite inclined to the plane of the Earth’s equator. It’s this inclination that creates minor lunar standstills and the diminishing effect for Harvest and Hunter’s Moons. 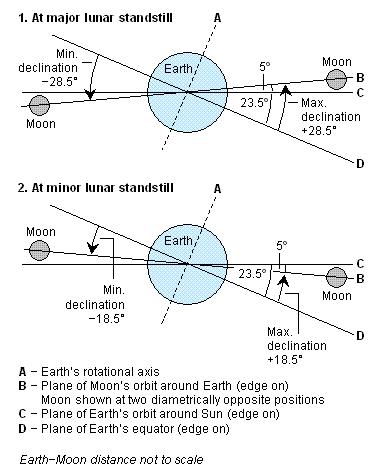 The plane of the moon’s orbit is inclined at 5o to the ecliptic (plane of the Earth’s orbit). In a year when the moon’s orbit intersects the ecliptic at the March equinox point, going from north to south, we have a minor lunar standstill year. Thereby, the lunar standstill points are 5o closer to the equator than the solstice points are (23.5o – 5o = 18.5o declination).

Now let’s talk about cycles. The inclination of the moon’s orbital path to the plane of the Earth’s equator changes over a cycle of 18.6 years. For instance, in the years 2006 and 2025, the moon in its monthly travels swings from about 28.5o south to 28.5o north of the Earth’s equator. This extreme inclination is called a major lunar standstill. In years when a major lunar standstill is happening, it accentuates the effect of the Harvest and Hunter’s Moon. So we have that to look forward to, in 2025.

In 2016, the opposite is true. It’s a minor lunar standstill year, when the moon’s monthly travels take the moon only from about 18.5o south to 18.5o north of the Earth’s equator.

This minor lunar standstill acts to lessen the effect of the Hunter’s Moon.

That’s not the case around the full Harvest and Hunter’s Moons. Around those full moons, there’s no long lag between moonrise one night, and moonrise the following night. It almost seems as if we have a full moon night for several nights in a row. It happens because the moon rises farther north along the eastern horizon each day for days on end, after the Northern Hemisphere’s full Harvest and Hunter’s Moons. The exact time of moonrise depends on your latitude, but, in an average year, at a mid-latitude, you might get a moonrise 30 minutes after sunset, on the night after full moon, instead of 50 minutes.

That’s the effect that won’t be as pronounced this year. There will be a longer-than-usual time between successive moonrises – around the time of the full Harvest and Hunter’s Moons in 2016 – due to the minor lunar standstill.

In or near a major standstill year – at high northern or southern latitudes – it’s even possible for the moon to rise at an earlier time than on the day before. For a prime example, see the chart below for Anchorage, Alaska, noting the moonrise times in October 2025.

Also, note the moonrise times for October 2016 in Anchorage, Alaska. Obviously, this year’s minor lunar standstill lessens the impact of the Hunter’s Moon.

By the way … about the term Hunter’s Moon. It might be of European origin, because northern Europe is much closer to the Arctic than to the tropics. Before the advent of artificial lighting, people planned nocturnal activity around the the moon, knowing the moon provides dusk-till-dawn daylight on the night of the full moon. Peoples of olden times also knew autumn full moons could be relied upon to usher in dusk-till-dawn moonlight for several days in a row at mid-temperate latitudes, or even as long as a week straight at far-northern latitudes.

This bonanza of moonlight in the season of waning daylight remains the legacy of the Harvest and Hunter’s Moons.

And, although that bonanza won’t be as great in 2016, it’ll still be noticeable. Enjoy the upcoming Hunter’s Moon! 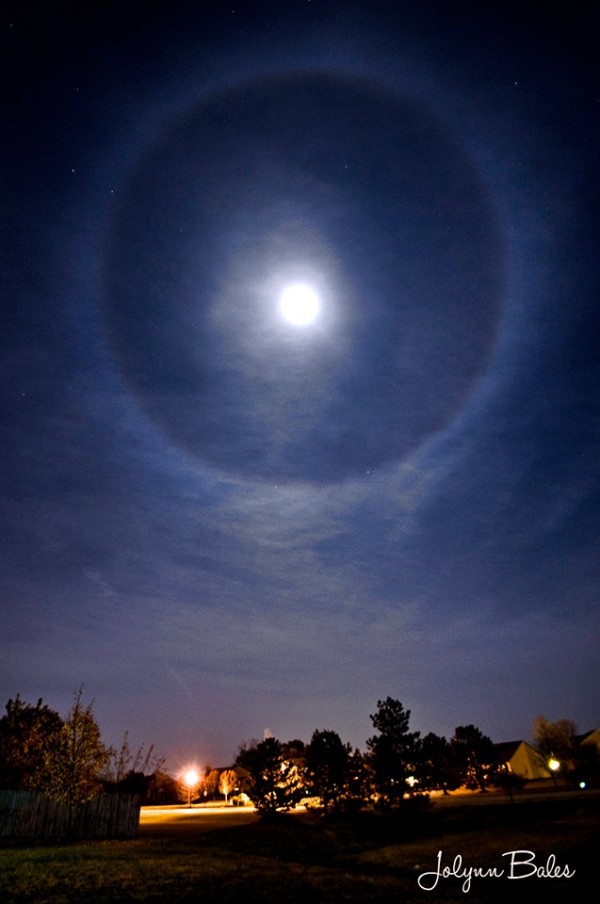 Halo around an almost full moon – near the time of Hunter’s Moon in 2015 – by Jolynn Keutzer Bales in central Indiana. See more photos of the 2015 Hunter’s Moon.

Bottom line: In 2016, diminished tilt of moon’s orbit to Earth’s equator lessens the Hunter’s Moon effect. We have a Hunter’s Moon, but its chief characteristic – that of rising around sunset for several evenings in a row – isn’t as pronounced.