The coming full moon – Hunter’s Moon for the Northern Hemisphere – is October 12-13. Will it be bigger, brighter, more colorful? All you need to know here. 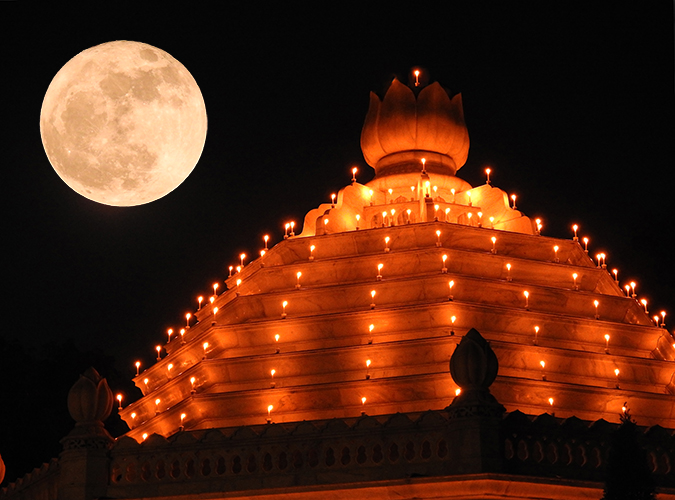 Swami Krishnananda in Ranchi, India, told us in 2017: “What is known as Hunter’s Moon in the West is called Kartik Purnima in India, and it is a sacred festival celebrated all over India. The photo was taken in Ranchi during this celebration, when a marble temple dedicated to Paramahansa Yogananda [author of the amazing book Autobiography of a Yogi] was lit up with candles.” Thank you, Swami Krishnananda!

What makes a Hunter’s Moon special? Nature is particularly cooperative around the time of the autumn equinox to make the fall full moonrises unique. 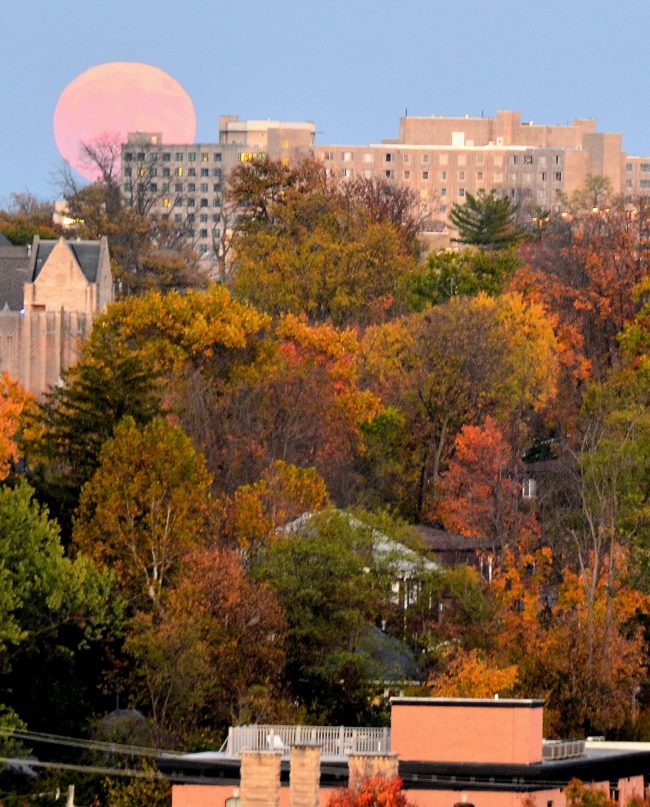 Here’s what happens. On average, the moon rises about 50 minutes later each day. But when a full moon happens close to the autumnal equinox – either a Harvest or a Hunter’s Moon – the moon (at mid-temperate latitudes) rises only about 30 to 35 minutes later daily for several days before and after the full moon. The reason is that the ecliptic – or the moon’s orbital path – makes a narrow angle with the evening horizon around the time of the autumn equinox.

The result is that there’s a shorter-than-usual lag time between successive moonrises around the full Hunter’s Moon.

These early evening moonrises are what make every Hunter’s Moon special. Every full moon rises around sunset. After the full Hunter’s Moon, you’ll see the moon ascending in the east relatively soon after sunset for a few days in a row at northerly latitudes.

If you’re in the Northern Hemisphere, look for the moon to be bright and full-looking for several nights beginning around October 11 and 12. Keep watching on October 13 and 14. Around all of these nights, you’ll see a bright round moon in your sky, rising around the time of sunset, highest in the middle of the night.

Here in the Northern Hemisphere, it’s autumn now. That means the ecliptic – or sun and moon’s path – makes its narrowest angle with your horizon in early evening. Image via ClassicalAstronomy.com.

When the angle of the ecliptic is narrow, the moon rises noticeably farther north on your horizon from one night to the next. So there’s no long period of darkness between sunset and moonrise. In other words, around the time of an autumn full moon, many people see the rising moon ascending in the eastern sky in twilight, for several evenings in a row. If you’re in the Southern Hemisphere, your evening ecliptic is nearly perpendicular to your early evening horizon now. You’ll see the full moon rise in twilight, but the next night’s moon come up in darkness, much later at night.  Image via ClassicalAstronomy.com.

The times don’t really matter. No matter where you live worldwide, look for a full-looking moon in the east as the sun goes down over the next several days. This full or full-looking moon will cross our skies throughout the night, as seen from around the globe.

Want to know the time of moonrise in your location? My favorite source of that information is this Custom Sunrise Sunset Calendar. Once you get to that page, be sure to click the box for “moon phases” and “moonrise and moonset times.” 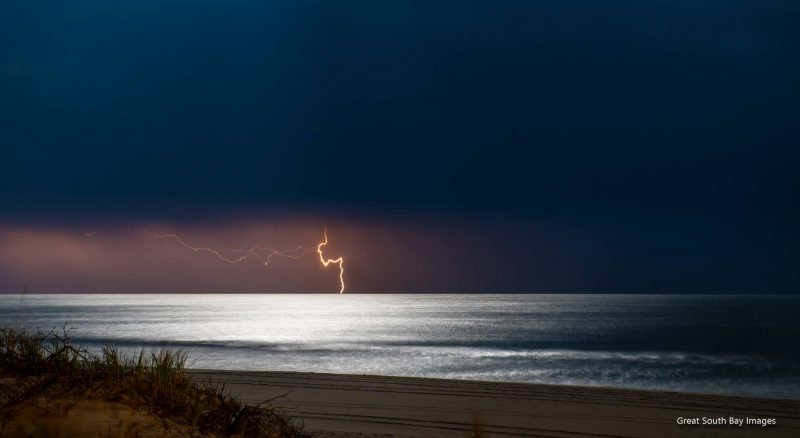 In the autumn months, there’s no long period of darkness between sunset and moonrise for several days in a row, around the time of full moon. In the days before tractor lights, the lamp of the Harvest Moon helped farmers to gather their crops, despite the diminishing daylight hours. As the sun’s light faded in the west, the moon would soon rise in the east to illuminate the fields throughout the night. A month later, after the harvest was done, the full Hunter’s Moon was said to illuminate the prey of hunters, scooting along in the stubble left behind in the fields.

Who named the Harvest and Hunter’s Moon? Those names probably sprang to the lips of farmers and hunters throughout the world, on autumn evenings, at times of the full moon. 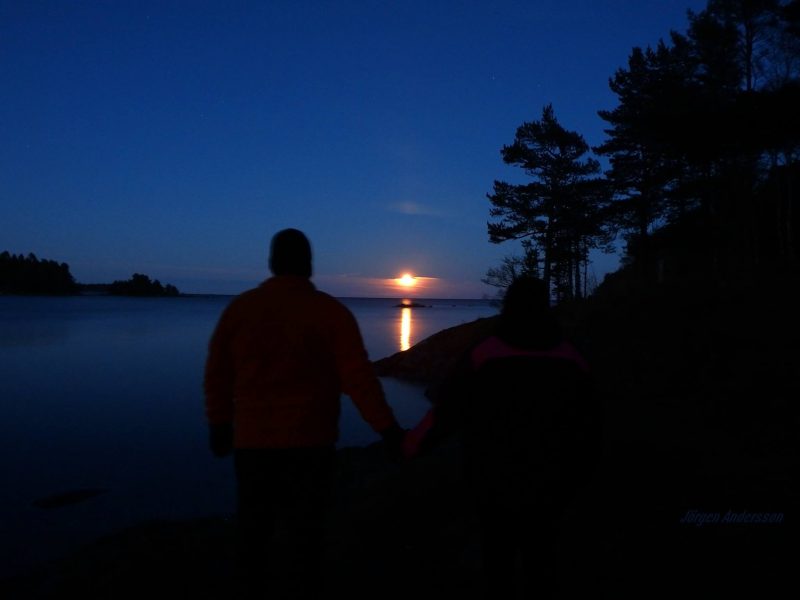 Bottom line: The Hunter’s Moon for the Northern Hemisphere in 2019 comes around the full moon of October 12-13. Learn the lore of the Hunter’s Moon – and what to look for – here.