How far is Betelgeuse?

Recent speculation that Betelgeuse might be on the verge of going supernova prompted many to ask: how far away is it? But getting a distance measurement for this star has been no easy task. 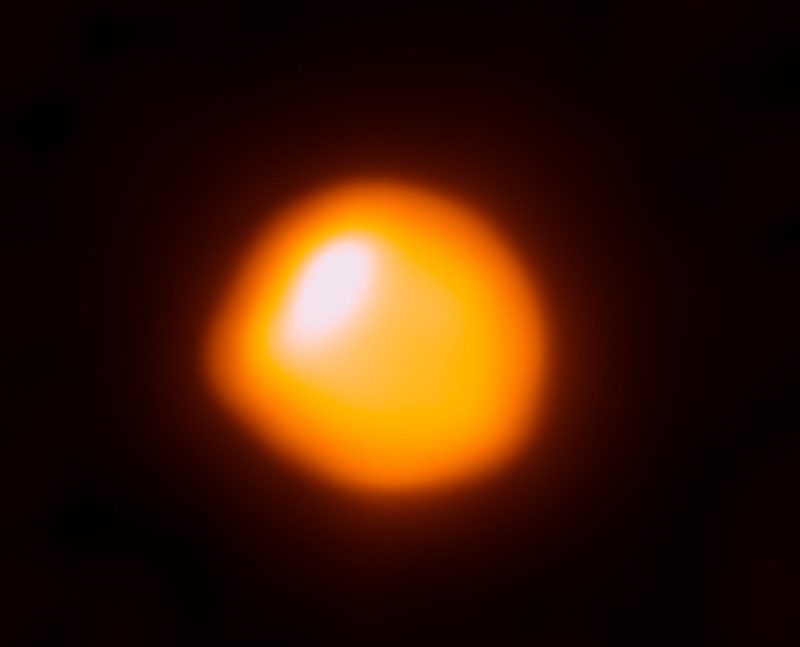 An image of Betelgeuse taken at sub-millimeter wavelengths by the Atacama Large Millimeter/submillimeter Array (ALMA). It shows a section of hot gas slightly protruding from the red giant star’s extended atmosphere. Some of the data used to compute the latest parallax for Betelgeuse came from observations by ALMA. Image via ALMA.

Betelgeuse, the bright red star in the constellation of Orion the Hunter, is in the end stage of its stellar life. Astronomers have long thought it will someday explode to become a supernova. In late 2019 and early 2020, Betelgeuse generated a lot of chatter on social media among astronomers. They wondered, somewhat jokingly, if an explosion were imminent because the star has dimmed, unprecedentedly, by a noticeable amount since late October 2019. As the news went mainstream, many people wondered how far Betelgeuse was from us and if an explosion could hurt life on Earth. The good news is that if Betelgeuse explodes, it is close enough to put on a spectacular light show, but far enough to not cause us on Earth any harm. To answer the distance question first, Betelgeuse is approximately 724 light-years away. But getting that answer, even for a relatively nearby star, is surprisingly difficult.

It’s only in the last 30 years, with the use of new technologies, that astronomers have obtained more accurate measurements for the distance to Betelgeuse and other nearby stars. This advance began in 1989, when the European Space Agency (ESA) launched a space telescope called Hipparcos, named after the famous Greek astronomer Hipparchus. Over several years of observations, the Hipparcos space telescope provided parallax and distance data for more than 100,000 relatively nearby stars.

Those measurements became the basis for most of the estimated distances to stars that you see today.

The 2020 lunar calendars are here! Order yours before they’re gone. Nearly sold out!

When viewed from two locations, there is a slight shift in the position of a nearby star with respect to distant background stars. For observations on Earth, taken six months apart, the separation between those two locations is the diameter of Earth’s orbit. The angle alpha is the parallax angle. Image via P.wormer / Wikimedia Commons.

The original Hipparcos data gave a parallax of 7.63 milliarcseconds for Betelgeuse; that’s about one-millionth the width of the full moon. Computations based on that parallax yielded a distance of about 430 light-years.

However, Betelgeuse is what’s known as a variable star because its brightness fluctuates with time (that said, the recent excitement over Betelgeuse’s dimming is because it’s the biggest dip in brightness ever observed). And therein began the difficulty in estimating Betelgeuse’s distance.

That’s because subsequent studies found an error in the methods used for reducing the Hipparcos data for variable stars. An effort to correct those errors gave a parallax of 5.07 milliarcseconds, changing Betelgeuse’s estimated distance from 430 light-years to about 643 light-years, plus or minus 46 light-years.

But wait, there’s more. In 2017, astronomers published new calculations that further refined Betelgeuse’s parallax to 4.51 milliiarcseconds. This new analysis of data from Hipparcos also included observations from several ground-based radio telescopes. That placed Betelgeuse at a distance of about 724 light-years, or, more accurately, between 613 and 881 light-years when data uncertainties are included.

You might know that the European Space Agency’s Gaia astrometry mission has the goal of making a three-dimensional map of our Milky Way galaxy. At the time of its second data release in April 2018, ESA said Gaia’s data had already made possible:

… the richest star catalog to date, including high-precision measurements of nearly 1.7 billion stars.

Yet Betelgeuse is not one of those stars, and Gaia won’t be used to find a more precise distance for Betelgeuse. The reason is that Betelgeuse is too bright for the spacecraft’s sensors. 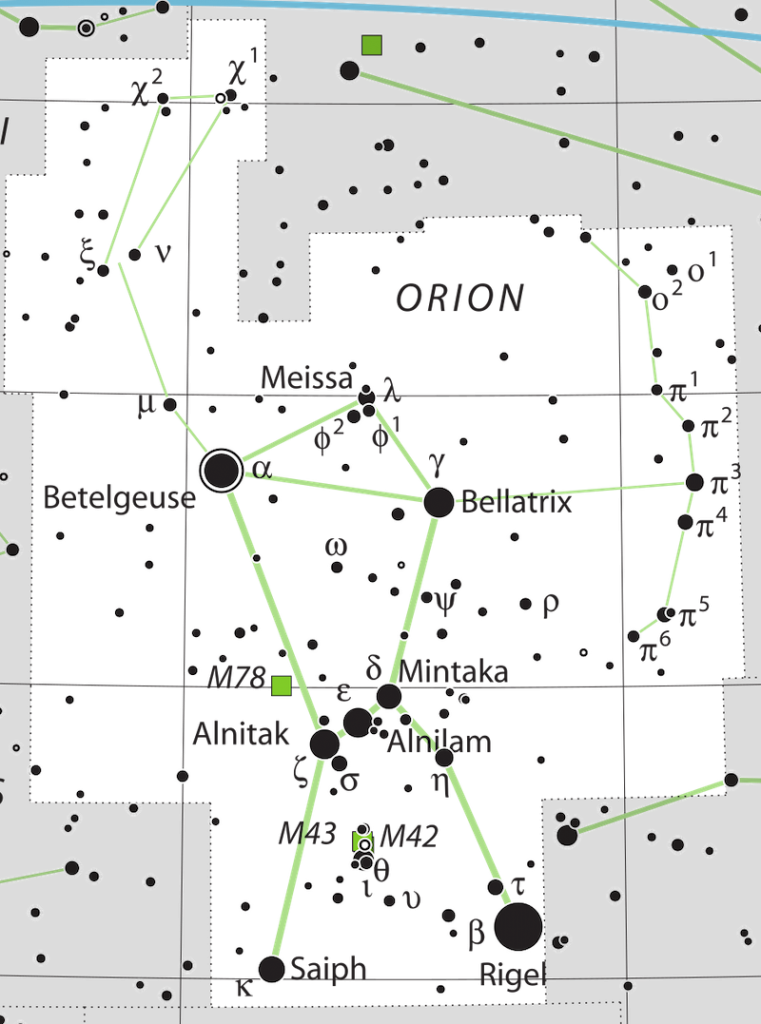 A map of Orion the Hunter, showing the location of Betelgeuse. Image via IAU / Sky & Telescope magazine / Wikimedia Commons.

A word about parallax. Have you ever viewed a nearby object from two different locations, and noticed how its position changed with respect to distant landmarks? That is the effect called parallax. To obtain a distance estimate, measurements of a nearby star’s position in the sky relative to distant background stars are obtained six months apart. During that time, Earth has traveled to the opposite side of its orbit, so the two locations are separated by the diameter of Earth’s orbit, about 186 million miles (300 million km). The difference in the nearby star’s relative position at the two locations allows astronomers to derive a parallax angle, and calculate a distance to the nearby star.

Ancient Greek astronomers understood the concept of parallax, but they lacked the technology to make very fine angular measurements on the sky. As a result, all measurements of stellar parallax failed until German astronomer Friedrich Bessel succeeded in 1838. He used a telescope, and even though his two observing locations were on opposite sides of Earth’s orbit, he was barely able to make out a tiny angular displacement. But it was enough to determine a distance of 11 light-years to a nearby star called 61 Cygni.

From Bessel’s time until Hipparcos’ launch in 1989, only a few thousand parallaxes had been determined. The process was hindered by a number of factors including the extremely small angles involved, imperfections in the instruments, and perhaps most of all, the murkiness of Earth’s own atmosphere. Observations from the Earth, even from very clear and dark locations such as deserts and mountaintops, are blurred by distortions in the atmosphere.

Hipparcos, in obtaining observations from space starting in 1989, pushed past the limitations imposed by Earth’s atmosphere to get positional data of stars at unprecedented accuracy for that time. Astronomers are continuing to refine these measurements with new innovations in instruments and data analysis, using ground- and space-based observatories.

Bottom line: Measuring the distance to Betelgeuse has been particularly difficult because it is a variable star. Complex calculations based on data from the Hipparcos space telescope and ground-based radio telescopes indicate it is about 724 light-years away.