Watch the sun’s shift on your horizon

Looking for an easy, but profound, sky activity? Note how far the sunset moves on your horizon, as spring shifts toward summer, or autumn toward winter, on your part of the globe.

The sunset is now making its way north, as illustrated in this 2016 photo composite by Abhijit Juvekar.

We got a question from a reader about the movement of the sunset or sunrise along the horizon, as Earth moves between seasons. He wrote:

Hello, I’m curious to know how far the sun moves north or south along the horizon each day? You know like half its width? A quarter of its width?

The answer is that the degree of the sun’s movement along the horizon depends on two things:

Also, the sun’s daily change of position along the horizon is greater the farther north or south you are from Earth’s equator.

For example, at a latitude of 40 degrees north latitude (Denver, Colorado; island of Sardinia, Italy; Beijing, China), the sun pretty much rises due east and sets due west on the day of the March 20 equinox. Two weeks later, on April 4, the sun rises about 7 degrees north of due east and and sets about 7 degrees north of due west. Since the sun’s diameter equals 1/2 degree, that means the sun has been traveling its own diameter (14 days x 1/2 degree = 7 degrees) northward daily.

At 65 degrees north latitude (Fairbanks, Alaska; Siberia; Iceland), the sun also rises and sets close to due east and due west on the day of the equinox. But two weeks later, on April 4, the sun rises and sets about 14 degrees north of due east and west. So, at this far-northern latitude, the sun moves about one degree (2 sun-diameters) along the horizon daily during this two-week period from the spring equinox to April 4.

At mid-northern latitudes, there’s a 2 to 3 week time period where you probably won’t discern any movement of the sun along the horizon, centered on the solstices (solstice means sun still).

What’s the best way to notice the movement of the sunset or sunrise along your horizon? To do it, you’ll need to observe from the exact same location every day. Just note the sun’s position now … and note it again every week or 10 days … and you’ll easily see the sun’s northward shift between now and the June solstice. 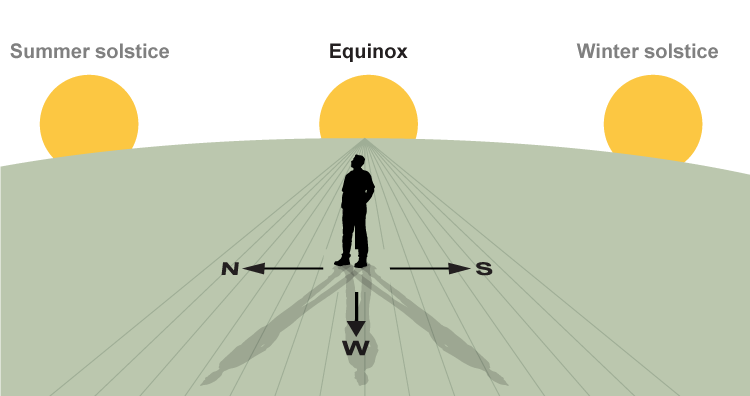 This illustration from the Chicago Tribune – related to an article on “Chicagohenge” – shows someone looking toward the sunrise. Lots of people now celebrate their own personal solstices and equinoxes with sunrise or sunset sightings among familiar landscapes, such as this image from Ben Orlove from 2016’s December solstice.

Bottom line: The amount of the sun’s movement along your horizon – at sunrise or sunset – varies with the time of year, and also your latitude. It’s most perceptible around the equinoxes and least so around the solstices. Also, the sun’s daily change of position along the horizon is greater the farther north or south you are from Earth’s equator.