The first comet to be found in 2021 – labeled C/2021 A1 (Leonard) – might become the brightest comet of this year! Charts and more info here. 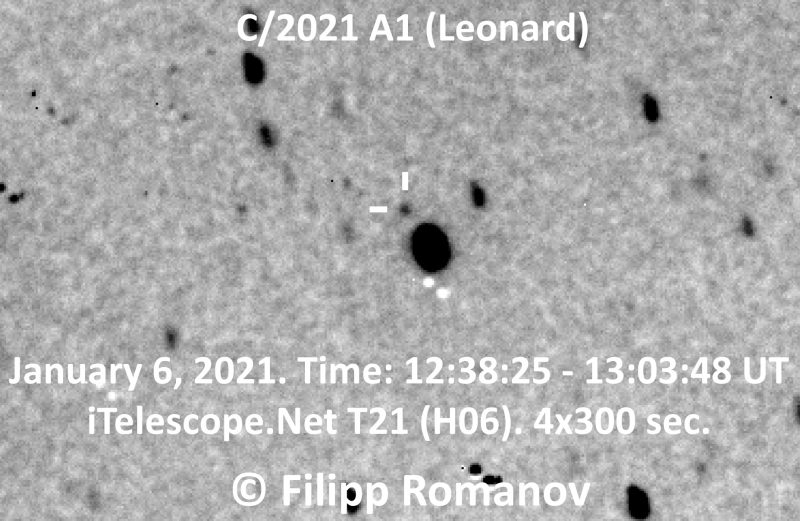 This is what a comet looks like – just a dot to our eyes – when it’s far from the sun. Astronomers spotted Comet Leonard (inside the tick marks) in early January 2021, a year before its closest sweep past our sun. The comet might be visible to the unaided eye by the end of this year. Read more about this image, which is via astronomer Filipp Romanov.

Exciting news! A newly found comet might become 2021’s brightest comet. Astronomer Greg Leonard discovered the comet that now bears his name – C/2021 A1 (Leonard) – on January 3, 2021 at the Mount Lemmon Observatory in Arizona. Astronomers report that discovery images show a tail for the comet, suggesting we might see a nice tail as Comet Leonard draws closer to the Earth and sun. The comet is still far away, currently between the orbits of Jupiter and Mars, heading inward. It’ll reach perihelion, its closest approach to the sun, around January 3, 2022. And so we’ll have a whole year to watch this comet get brighter, and brighter!

Estimates indicate it might reach a visual magnitude of around 5 or even 4 (the lower the brighter), and although at its brightest the comet will be very close to the horizon, we still might get very good views using binoculars during the days before closest approach to Earth, in early December 2021, with visibility to the eye alone still a possibility.

Nature provides us with sky events seen once in a lifetime. Comet Leonard might be one of these, as it seems to have a hyperbolic orbit, that is, an orbit that’ll carry it only once through the inner solar system, then out again into the depths of space.

In other words, after this current sweep close past our sun, Comet Leonard won’t be seen again from Earth. 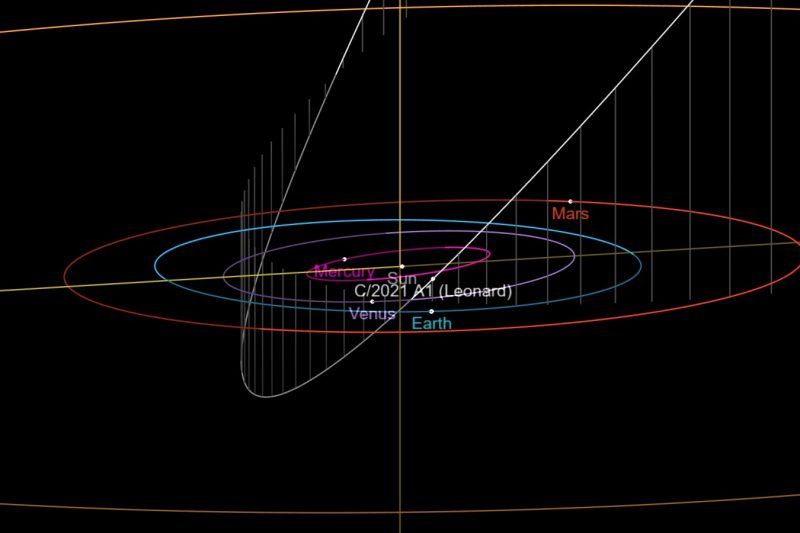 This perspective on Comet C/2021 A1 (Leonard) shows its trajectory through our solar system. North is up. You can see that its orbit will cause it to be initially visible from Earth’s Northern Hemisphere, and then from the Southern Hemisphere. Image via NASA/JPL.

Will Comet Leonard be visible to the unaided eye? It’s possible. This might be this year’s brightest comet (unless a new brighter one is discovered). It will provide a nice spectacle to observers using long exposure cameras, binoculars and even the smallest telescopes.

Despite its incredible speed through the vast space of our solar system, don’t expect to see this comet swoosh across the sky. Like planets, comets do move in front of the star background, but only very slowly due to the large distances involved. Observers using telescopes will have to take a close look at the comet’s position relative to background stars, and compare the view five or 10 minutes later to detect its motion, because its great distance will cause it to appear as a very slow moving object. 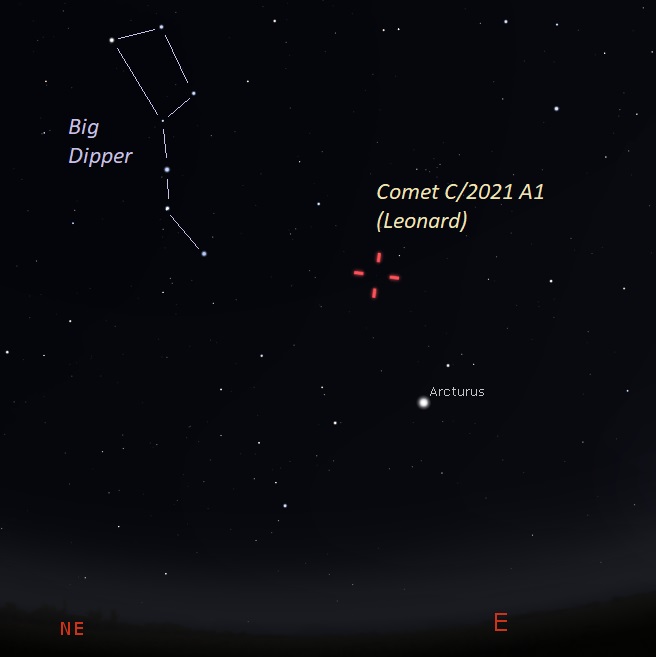 Location of Comet C/2021 A1 (Leonard) on December 1, 2021. This chart is as seen from U.S., facing east about 90 minutes before sunrise. The Big Dipper asterism in the constellation Ursa Major the Great Bear will provide a good reference for observers to locate the comet. Illustration by Eddie Irizarry using Stellarium. 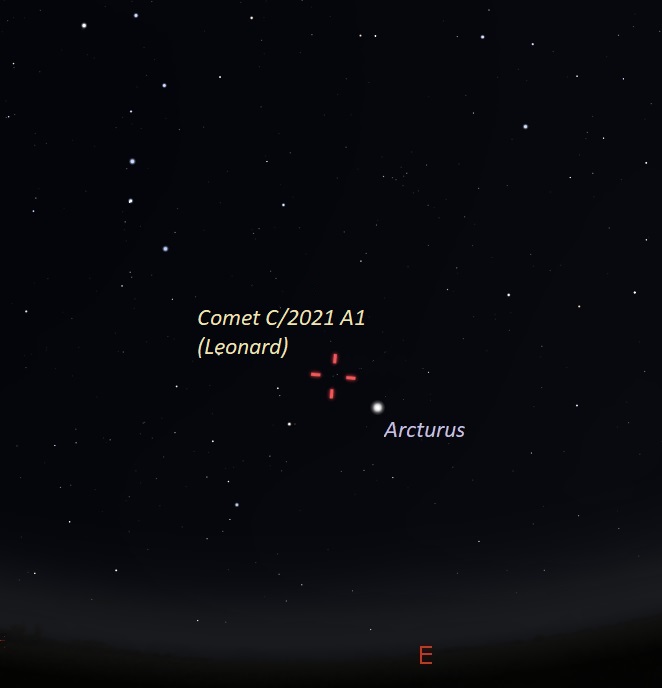 Comet C/2021 A1 is traveling so fast that its position in our skies will change daily during early December 2021. Here is its location on December 5, 2021, about 90 minutes before sunrise. Comet Leonard will be located very close to where we see bright star Arcturus, as seen here. Facing east, as seen from U.S. Illustration by Eddie Irizarry using Stellarium. 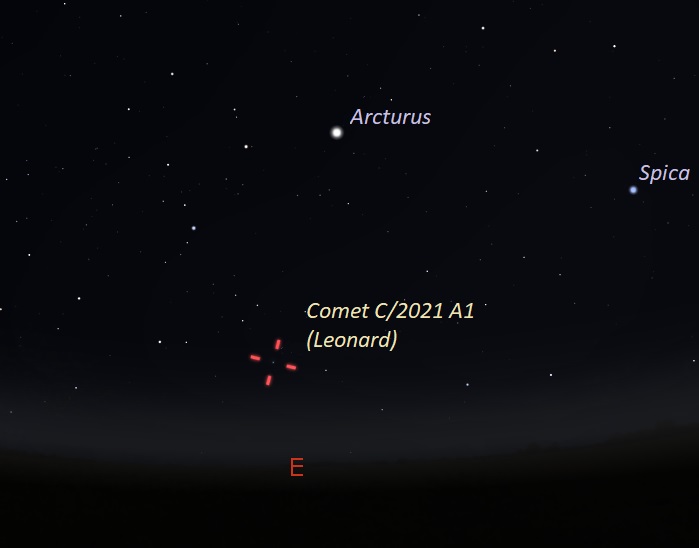 Location of Comet C/2021 A1 (Leonard) on December 10, 2021. By then, it will be brighter but closer to the horizon. As seen from U.S. about 30 minutes before sunrise. Illustration by Eddie Irizarry, using Stellarium.

Around December 14-16, 2021, Comet C/2021 A1 (Leonard) will become visible just after sunset, very low in the southwest horizon, as seen from U.S.   See additional charts below: 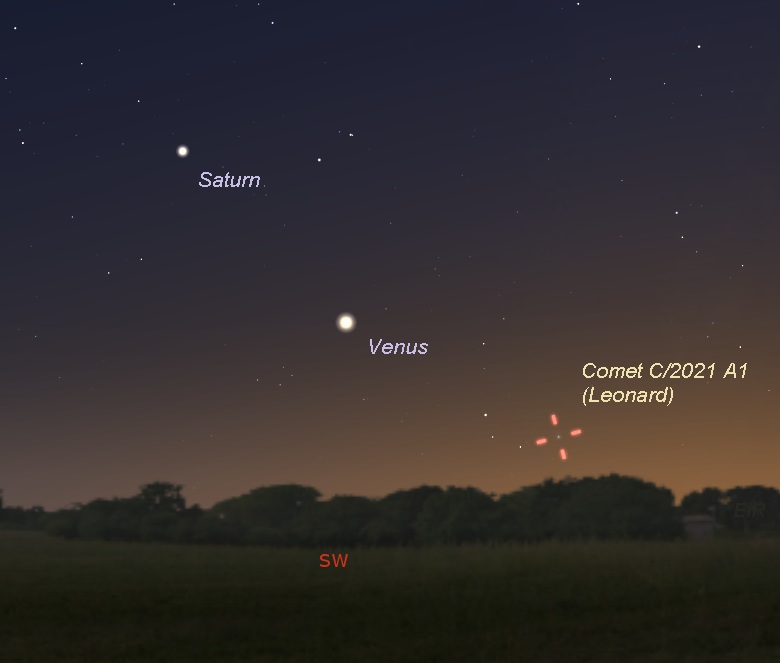 Location of Comet C/2021 A1 (Leonard) on December 15, 2021, about 30 minutes after sunset.  Facing Southwest, as seen from U.S.   Illustration by Eddie Irizarry using Stellarium. 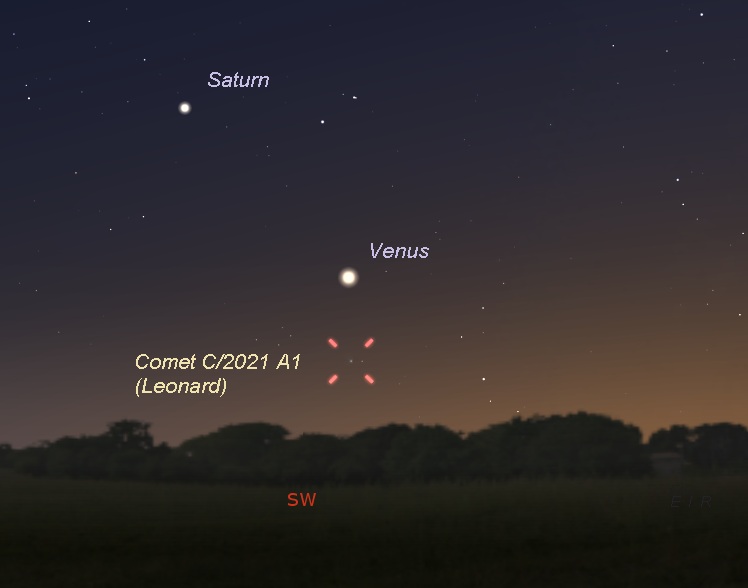 On December 17, 2021, about 30 minutes after sunset, comet Leonard will be located below planet Venus. Facing Southwest, as seen from U.S. Illustration by Eddie Irizarry using Stellarium. 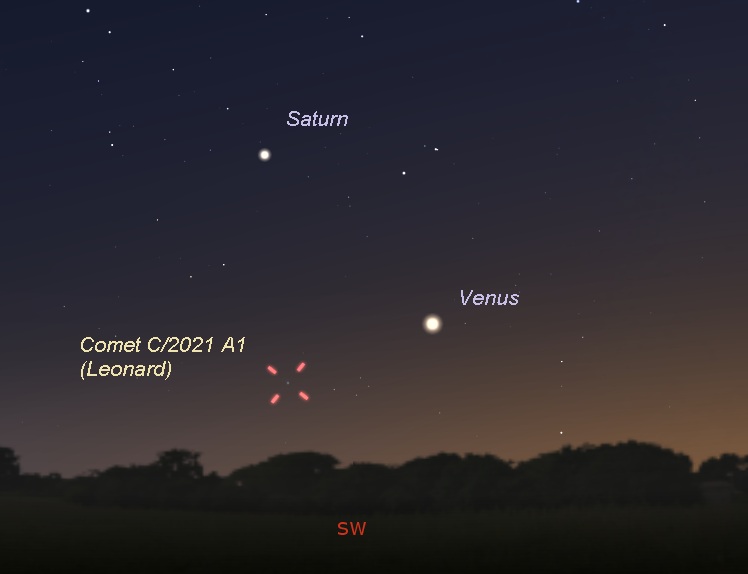 Bottom line: Comet C/2021 A1 (Leonard) – discovered on January 3, 2021 – is currently between the orbits of Jupiter and Mars, heading inward. It’ll reach perihelion, its closest approach to the sun, around January 3, 2022. We’ll have a whole year to watch this comet get brighter and brighter. It might become the brightest comet of 2021!