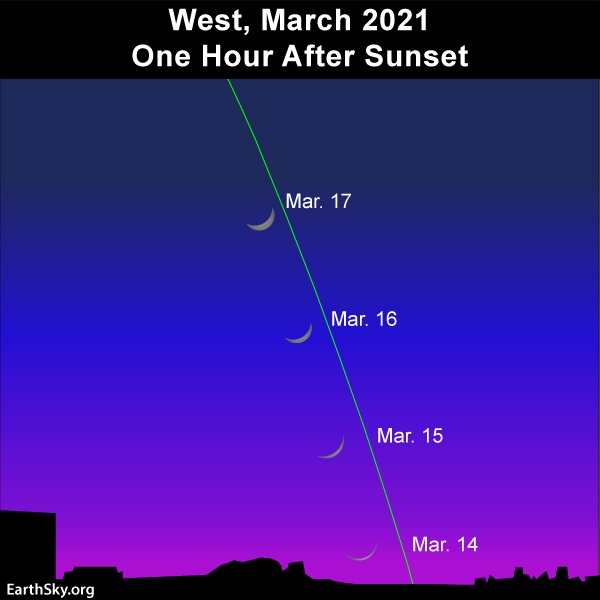 These next several days – March 14, 15, 16 and 17, 2021 – look westward after sunset to glimpse the young and slender moon adorning the evening twilight. You could possibly miss the moon at dusk March 14, because the pale whisker-thin crescent may not be bright enough to overcome the glow of evening twilight. More than likely, the young moon on March 14 will follow the sun beneath your horizon before nightfall (end of astronomical twilight). Find an unobstructed horizon in the direction of sunset, and start your young moon search some 45 minutes after the sun goes down. Binoculars could come in handy!

Find out the moon’s setting time in the U.S. or Canada via Old Farmer’s Almanac 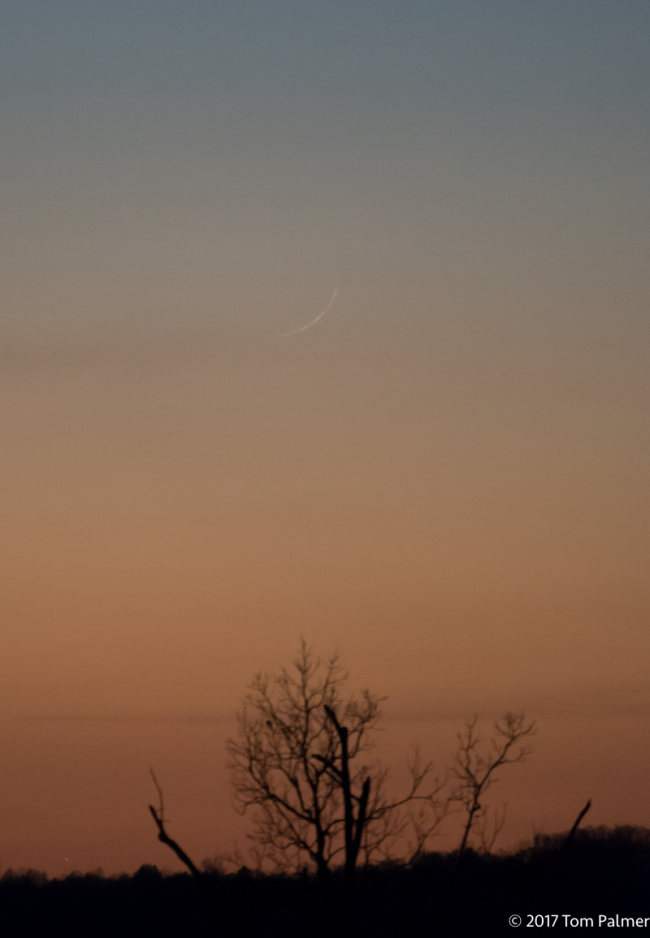 Tom Palmer in Carrboro, North Carolina, wrote: “I first spotted the moon about 7:50 pm (on March 28, 2017) in 10×50 binoculars. Shortly after that I was able to see it with the unaided eye. This picture was taken when it was almost exactly 22 hours old.”

As a general rule, it’s quite difficult to spot a young moon that’s less than one day (24 hours) old. Fortunately, for most of the world, the moon will be older than one day (more than one day past new moon) at sunset March 14. However, in far eastern Asia, most of Indonesia and Australia, and New Zealand, the moon will actually be less than one day old as the sun sets in that part of the world on March 14. No matter where you live, give the March 14 young moon a try anyway. But remember binoculars. Bring along the whole family, especially the little kids, whose sharp eyesight may spot that almost-imperceptible crescent before you do.

If you miss the young moon on March 14, look again at evening dusk and nightfall May 15 and 16. With each passing day, a wider and brighter crescent shines higher up in the sky at sunset, and stays out longer after dark. Moreover, it should be easier to spot the soft luminescence of earthshine on the dark or nighttime side of the moon. Earthshine is twice-reflected sunlight, with the Earth reflecting sunlight to the moon, and the moon, in turn, reflecting sunlight back to Earth. 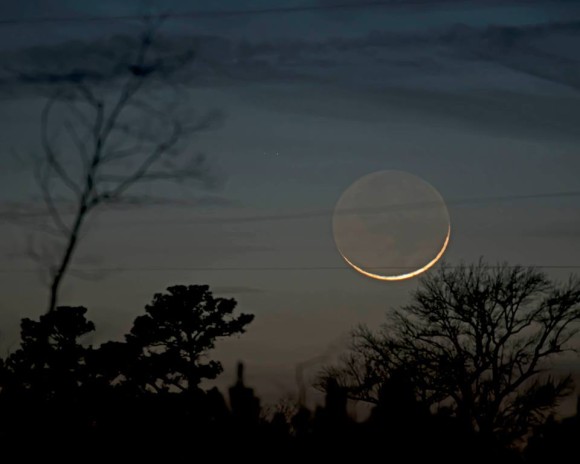 Ken Christison caught a young moon, with its dark side all aglow in earthshine, on March 31, 2014, the day after a new moon.

At new moon, the moon more or less passes between the Earth and sun, and is therefore invisible in our sky. As the moon waxes, going from new moon to full moon, the moon moves about 1/2 degree (the moon’s own angular diameter) eastward of the sun per hour, or 12 degrees eastward of the sun per day. That’s why the waxing (increasing) moon will become easier to see after its initial evening appearance on March 14.

Bottom line: See if you can spot the young moon after sunset these next few days. Give it a go, starting on March 14. By March 17, the waxing crescent is relatively high in the west after sunset.