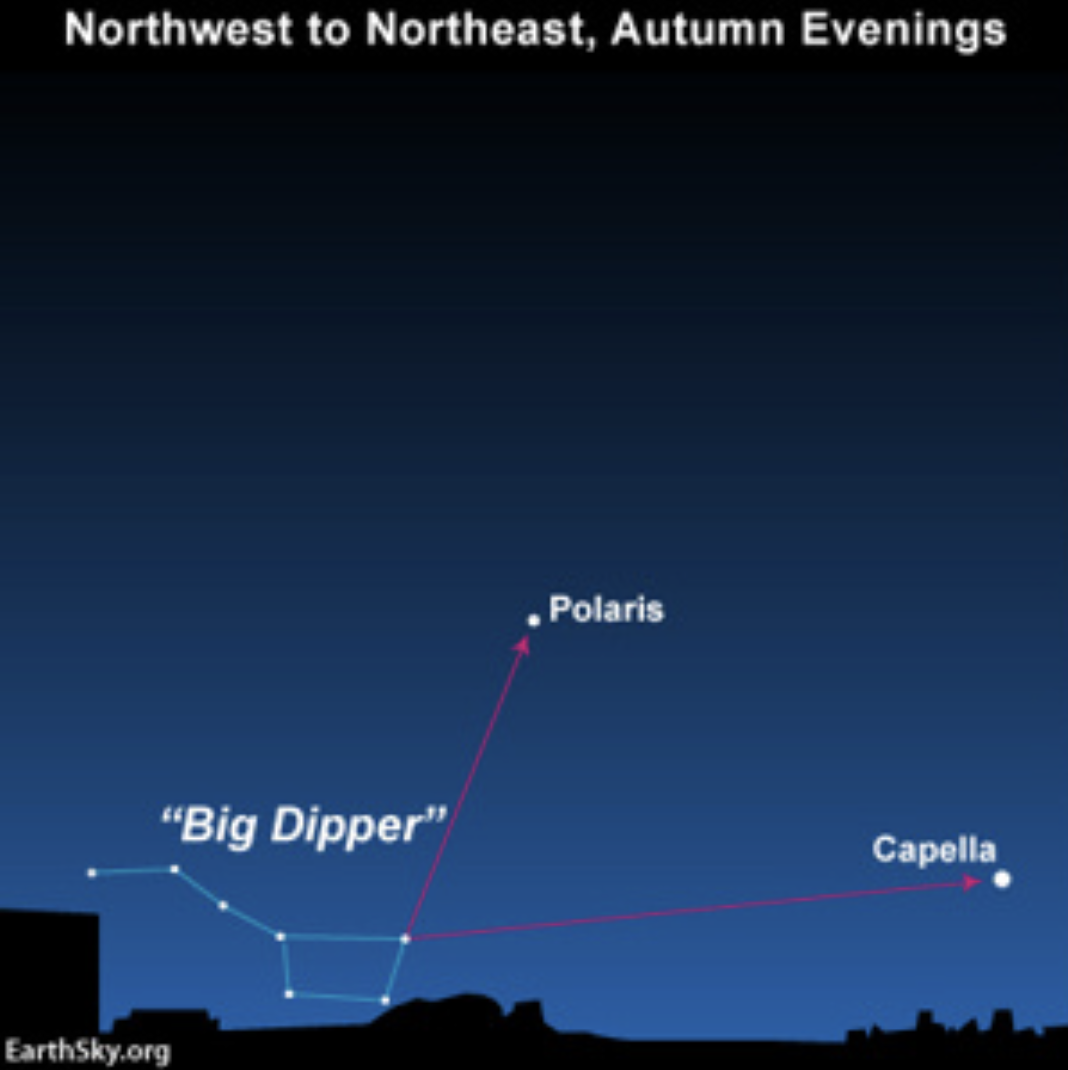 This evening, check out one of the flashiest stars in the sky. It’s so bright that every year in northern autumn, we get questions from people in the Northern Hemisphere who see a bright star twinkling with red and green flashes. It’s found low in the northeastern sky at nightfall or early evening as seen from mid-northern locations. That star is likely Capella. If you could travel to it in space, you’d find that Capella is really two golden stars, both with roughly the same surface temperature as our local star, the sun … but both larger and brighter than our sun.

Capella is in the constellation Auriga the Charioteer, but since antiquity it has carried the name Goat Star. You might pick it out just by gazing northeastward from a Northern Hemisphere latitude during the evening hours in October. Capella climbs upward through the night, and, this month, soars high overhead in the wee hours before dawn.

Scott MacNeill at Frosty Drew Observatory in Rhode Island wrote in October 2016: “I noticed how fabulous Capella looked just hanging in the northeast sky. So I directed my telescope to Capella and captured this shot.” Thanks, Scott!

So here is a golden point of light that flashes red and green when it’s low in the sky. Why does it do that?

The reality is that every star in the sky undergoes the same process as Capella, to produce its colorful twinkling. That is, every star’s light must shine through Earth’s atmosphere before reaching our eyes. But not every star flashes as noticeably as Capella. The flashes are happening because Capella is low in the sky in the evening at this time of year. And, when you look at an object low in the sky, you’re looking through more atmosphere than when the same object is overhead.

The atmosphere splits or “refracts” the star’s light, just as a prism splits sunlight.

So that’s where Capella’s red and green flashes are coming from … not from the star itself … but from the refraction of its light by our atmosphere. When you see Capella higher in the sky, you’ll find that these glints of red and green will disappear.

By the way, why are these flashes of color so noticeable with Capella? The reason is simply that it’s a bright star. It’s the sixth brightest star in Earth’s sky, not including our sun. 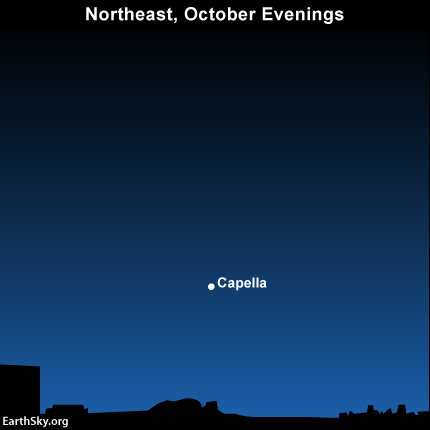 Capella is a bright star, what astronomers call a 1st magnitude star. It’s one of the brightest stars in our sky. If you’re in the Northern Hemisphere, and you happen to look in the northeast one evening, you might notice Capella as a bright, flashy star near the northeastern horizon.

Bottom line: If you’re in Earth’s Northern Hemisphere, a bright star twinkling with red and green flashes, low in the northeastern sky on October evenings, is probably Capella.