Don’t miss Venus and the Pleiades! Their conjunction is April 3 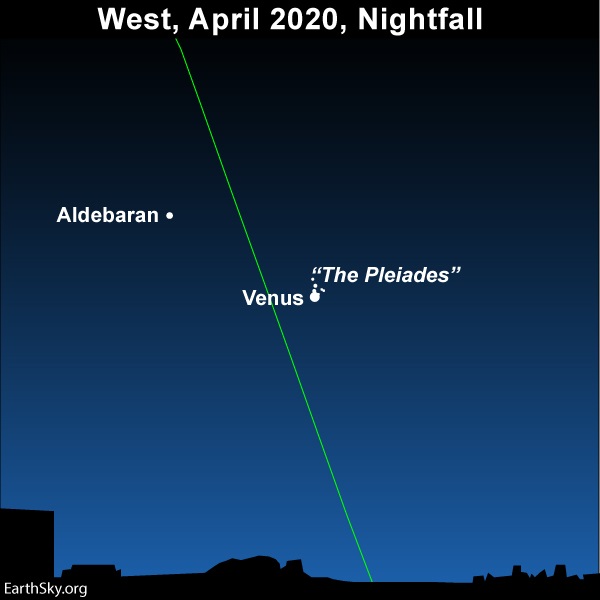 Although the planet Venus has a conjunction with the Pleiades star cluster every year, the best Venus-Pleiades conjunctions only come in early April and recur in cycles of 8 years. The last time was in 2012, and now it’s time again. Be sure to watch on April 2, 3 and 4, 2020, as Venus grazes past this beautiful cluster. On the middle date – April 3 – the conjunction takes place, with Venus passing a scant 1/4 degree south of Alcyone, the brightest star in the Pleiades star cluster. For reference, the moon’s angular diameter spans about 1/2 degree.

So Venus will be sweeping very close to the Pleiades, as shown on the chart below! They’ll be beautiful as seen from around the world, in the west after sunset.

Photos from the EarthSky community: Venus and the Pleiades meet 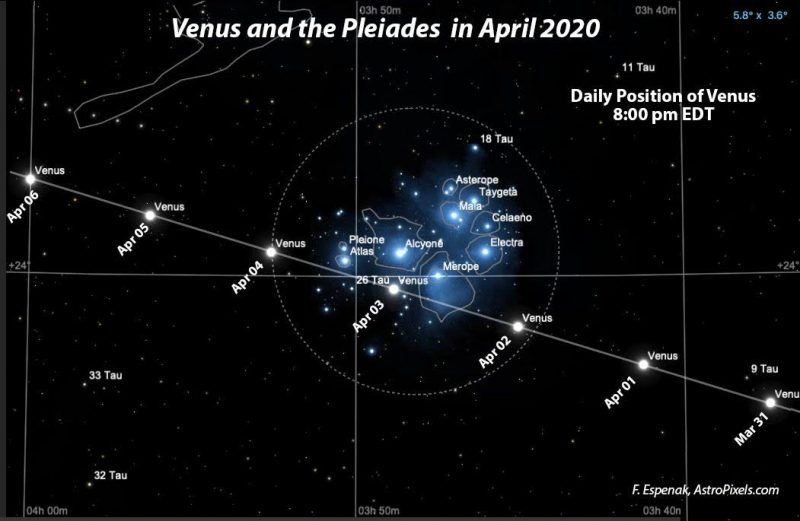 Fred Espenak created this diagram showing Venus’ daily position during early April. He said: “Because of their mutual gravitational attraction on each other, Venus and Earth are in an orbital resonance with a ratio of 13:8. That means that 13 orbits of Venus around the sun is nearly equal to 8 Earth orbits around the sun. Consequently, Venus appears in the same part of the sky as seen from Earth every 8 years. One of the most interesting consequences of this geometry is the passage of Venus through (really in front of) the Pleiades star cluster. The next such event occurs later this week and can be watched with the unaided eye or a pair of binoculars. A similar passage occurred 8 years ago in 2012.” Thanks, Fred!

Consider that, right now, Venus is at a near-maximum elongation of 46 degrees east of the setting sun. It’s a big treat to witness a super-close conjunction of Venus and the Pleiades cluster, while Venus simultaneously has such a favorable elongation from the sun. In fact, it doesn’t get any better than right now for catching a Venus-Pleiades conjunction. The last good opportunity happened on April 3, 2012, and will next take place on April 4, 2028.

Let’s consider last year’s and next year’s Venus-Pleiades conjunctions. Last year, on June 9, 2019, Venus was 5 degrees south of Alcyone but was only 18 degrees west of the rising sun (in the morning sky). Next year, on May 9, 2021, Venus will pass about 4 degrees to the south of Alcyone, but at an elongation of only some 11 degrees east of the setting sun.

See? Conditions are really good in 2020 for seeing this beautiful event in the night sky. 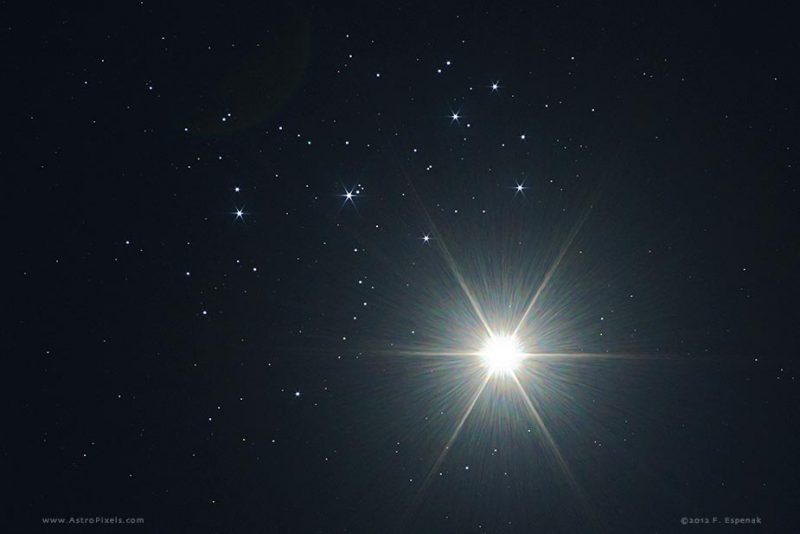 Think photo opportunity! Eight years ago, a similarly favorable conjunction of Venus and the Pleiades cluster occurred on April 3, 2012. Photo via Fred Espenak.

Here’s how to watch. Soon after sunset, in the deepening evening twilight, notice the brightest “star” in your western sky. That’ll be the planet Venus. This world ranks as the third-brightest celestial object to light up the heavens, after the sun and moon. Given clear skies, you simply can’t miss it at evening dusk. As dusk gives way to darkness, look for the dipper-shaped Pleiades cluster near Venus on the great dome of sky. Try using your eye alone, or an optical aid such binoculars.

Venus and the Pleiades star cluster as seen from mid-northern latitudes in North America on April 2, 2020.

Remember to bring along binoculars, if you have them, because the moonlight might make it difficult to see this magnificent cluster with the eye alone. In a dark sky, however, the Pleiades cluster is quite easy to see with no optical aid.

Conjunctions between Venus and the Pleiades can only happen somewhere between early April and early July. As we mentioned before, a Venus-Pleiades conjunction happens every year, but these super-close conjunctions only come in early April in cycles of 8 years (every other leap year). 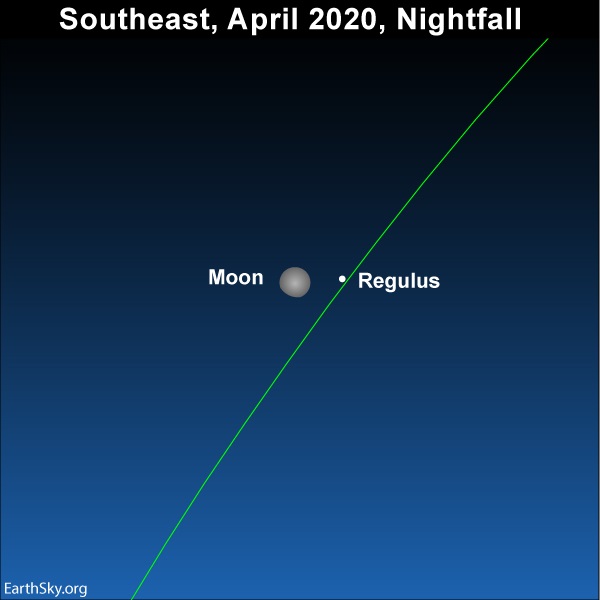 Also, on or near April 4, 2020, watch for the bright waxing gibbous moon to pair up with Regulus, the brightest star in the constellation Leo the Lion.

Because Venus orbits the sun 13 times in about the same time period that Earth orbits the sun 8 times, we find similar Venus-Pleiades conjunctions taking place on or near the same date every 8 years. We list these early April Venus-Alcyone conjunctions for the 21st century (2001 to 2100):