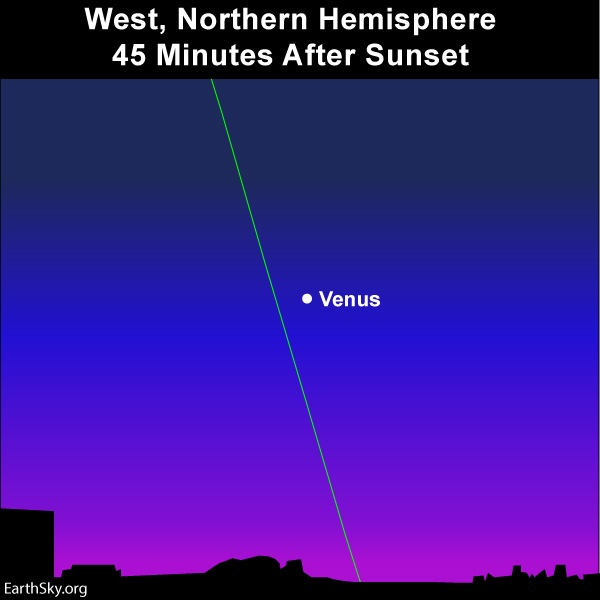 This week, the brightest planet – blazing Venus – reaches the end of its tether with respect to the sun. Its greatest elongation – farthest apparent distance from the sun in our sky – is March 24. This is Venus’ maximum elongation for the year 2020. The planet now resides a whopping 46.1 degrees east of the sun, placing Venus in the western sky after sunset. You can’t miss Venus after the sun goes down. It’s the brightest thing up there, and, later this week, the young moon will join the view. Who could ask for more?

But, wait there is more. At northerly latitudes, Venus – the “evening star” – stays out until late night. How cool is that?

Venus will reach its greatest elongation in the morning sky on August 13, 2020. Then it will be 45.8 degrees west of the sun, or in the eastern sky before dawn. Notice that, in 2020, the morning is slightly less than this week’s evening elongation: 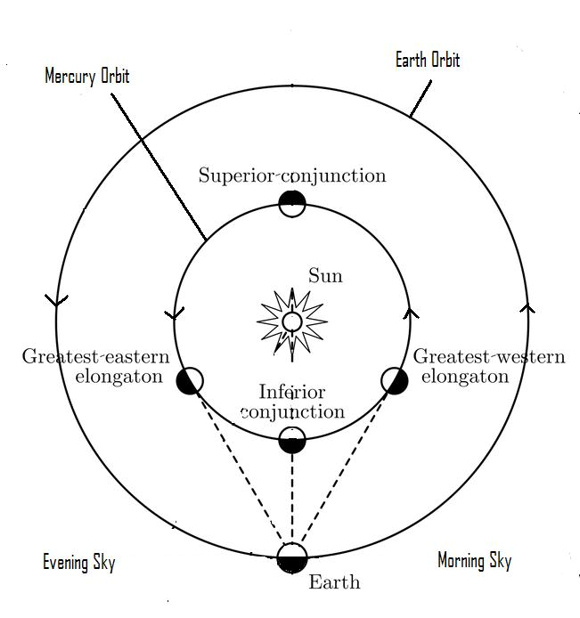 Venus ranks as the third-brightest celestial body to light up the heavens, after the sun and moon. Some sharp-eyed people might even see this brilliant world in a daytime sky. However, most of us will have to wait until after the sun goes down to see this blazing beauty of a planet. Venus is the first “star” to pop out in the west after sunset.

Because Venus orbits the sun inside the Earth’s orbit, Venus can never be opposite the sun in our sky. Nor can Venus be as much as 90 degrees away from the sun in our sky (like the moon at its first and last quarter phases). At maximum, this world swings out 47 degrees from the sun on the sky’s dome. So, when Venus is visible, we either see it in the west after sunset or in the east before sunrise. 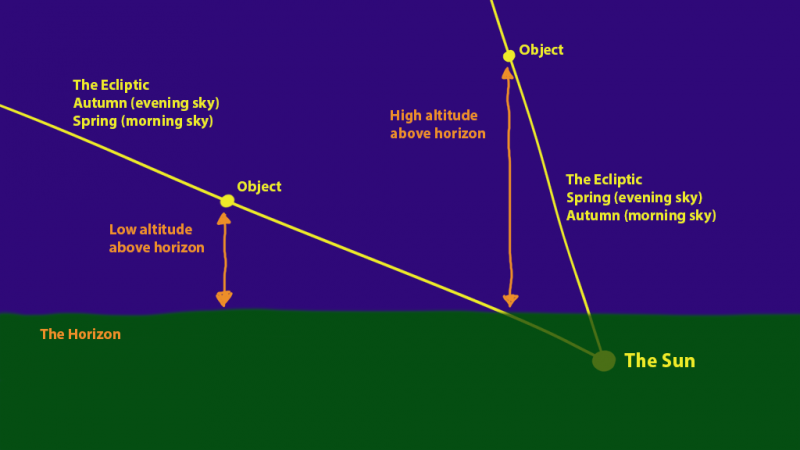 At sunset on the spring equinox, the ecliptic – pathway of the sun. moon and planets – hits the sunset horizon at its steepest angle of the year. But at sunset on the autumn equinox, the ecliptic hits the sunset horizon at its shallowest angle. Therefore, when Venus at its greatest evening elongation coincides closely with the spring equinox, Venus soars to its highest spot at sunset and stays out for a maximum time after sundown. Image via Dominick Ford.

Venus stays out for a maximum time after sunset when Venus’ greatest evening elongation coincides closely with the spring equinox. On the other hand, when a greatest evening elongation coincides with the autumn equinox, Venus’ presence in the evening sky, though not absent, is most subdued. Because the recent March 20 equinox counts as the Northern Hemisphere’s spring equinox yet the Southern Hemisphere’s autumn equinox, this evening apparition of Venus favors the Northern Hemisphere.

At sunset on and around the spring equinox, the ecliptic – the roadway of the planets on the sky’s dome – hits the sunset horizon at its steepest angle for the year. Therefore, Venus at its greatest evening elongation shines at its maximum altitude in the evening sky. Contrast the sky chart for about 40 degrees north latitude at top with the sky chart below at 40 degrees south latitude below. 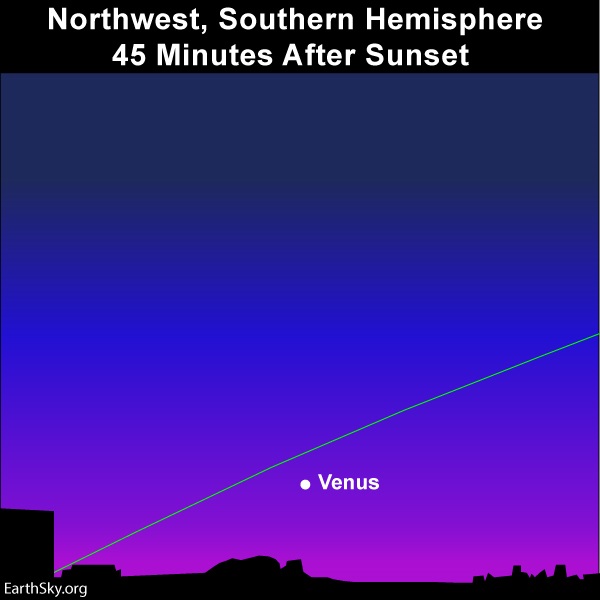 At sunset on and around the autumn equinox, the ecliptic – the planetary roadway – hits the sunset horizon at its shallowest angle for the year. Therefore, Venus at its greatest elongation is much more subdued at southerly latitudes, although this brilliant world will nonetheless make a big splash at evening dusk.

Bottom line: Venus swings out to its greatest elongation from the sun in the evening sky on March 24, 2020. At northerly latitudes, Venus stays out for a maximum time after sunset on these March 2020 evenings. Enjoy!