Deneb and its constellation Cygnus the Swan 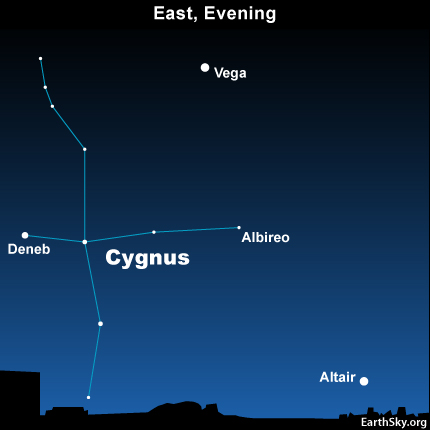 Deneb is the northernmost star in the famous Summer Triangle, a prominent asterism visible at this time of year, made up of three bright stars in three separate contellations. Deneb’s constellation is Cygnus the Swan. In a dark sky, you can imagine Cygnus as a Swan, flying along the starlit trail of the summer Milky Way. The constellation Cygnus also makes an obvious cross shape, and the Cross is another asterism, that is, another prominent star pattern. It’s called the Northern Cross.

Just remember, the constellation Cygnus the Swan contains the asterism of the Northern Cross. The Cross is – more or less – just another way to see the Swan. Deneb is at the top of the Cross, but at the tail of the Swan (the star name “deneb” always means “tail”). The little star Albireo is at the head of the Swan, but at the base of the Cross. Whew!

The star Deneb is very distant, relative to most other stars we see with the eye alone. It’s one the most distant stars you’ll ever see using just your eyes. Clearly, Deneb is a more powerful star than most; it’s one of our Milky Way galaxy’s most luminous stars. When you gaze at this bright star Deneb, you’re gazing across thousands of light-years of space. That’s in contrast to most visible stars in our sky, located tens to hundreds of light-years away.

What is Deneb’s exact distance? The answer to that is uncertain. Read more: Deneb is distant and very luminous

The photo below is from Annie Lewis in Spain. She solved the problem of picking out the Summer Triangle from among many stars in the night sky by looking for the Triangle in the east soon after sunset. These three stars are, after all, among the brightest in the sky, and so you can see them pop into view before it gets dark enough to see fainter stars. 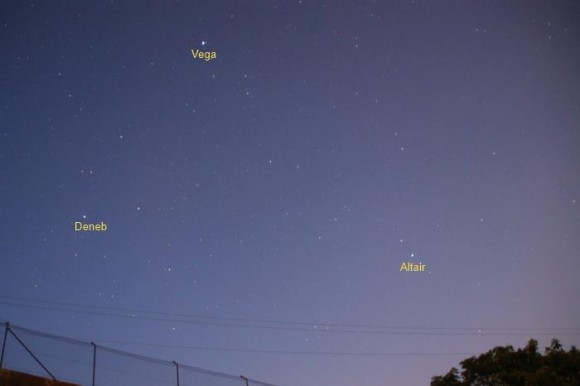 EarthSky Facebook friend Annie Lewis in Madrid, Spain, captured this photo of the Summer Triangle shortly after nightfall on a summer night. In fact, she said, the only stars visible to the unaided eye when she took the photo were the 3 in the Triangle. But her camera knew better. Thanks, Annie!

Bottom line: The Summer Triangle consists of 3 bright stars – Vega, Deneb and Altair – in 3 different constellations. Deneb represents the tail of Cygnus the Swan and the head of an asterism known as the Northern Cross. It’s one of the most distant stars you can see using just your eyes.