Moon passes Spica on December 10, as Venus blazes below 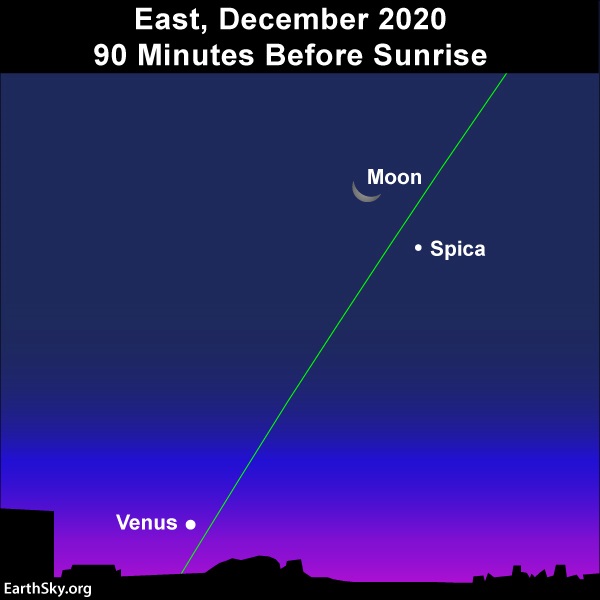 Before dawn on December 10, 2020, watch for the waning crescent moon to pair up with the star Spica in your eastern sky. Spica, a blue-white gem of a star, is the brightest star to light up the constellation Virgo the Maiden, and serves as a prime example of a 1st-magnitude star. Spica ranks as the 15th brightest in all the heavens.

If you get up after the break of dawn, you might have a hard time seeing Spica in the twilight glare. But you should have little trouble viewing the planet Venus beneath the moon and closer to the horizon. After all, dazzling Venus ranks as the third-brightest celestial body, after the sun and moon.

The illuminated side of the waning crescent moon points right at Venus on the morning of December 10. Venus outshines Spica by some 90 times.

See the moon phase for every day in 2021 on EarthSky’s Lunar Calendar! Order yours before they’re gone. Makes a great gift!

The moon, just like the sun, rises in the east and sets in the west; and the stars and planets, like the sun, also rise in the east and set in the west. That’s because the Earth spins from west-to-east on its rotational axis, making it appear as if the sun, moon, stars and planets move westward across the sky while the Earth remains at rest. But it’s actually the rotating Earth that’s doing the moving.

The stars return to the same place in the sky about 4 minutes earlier by the clock each day. On the other hand, all solar system objects – sun, moon, planets and comets – wander relative to the “fixed” stars of the zodiac. If you could see the stars during the daytime, you’d see the sun moving about one degree eastward in front of the constellations of the zodiac per day. (For reference, the sun’s diameter spans about 1/2 degree, so 2 sun-diameters equal one degree.) 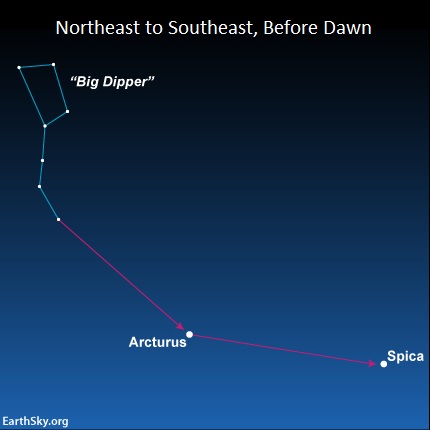 When the moon is no longer there to guide you, use the Big Dipper to arc to Arcturus and to spike Spica.

Astronomers in ancient times were well aware of the sun’s annual motion in front of the backdrop stars. Most of them, though, thought that the sun was circling Earth while the Earth was staying still. Today, astronomers know it’s the Earth that goes around the sun.

Spica serves as a fixed reference point for cataloging the movement of the sun, moon and planets. The sun passes to the north of Spica every year around mid-October. The moon sweeps by Spica every month. Unlike the sun, which is always found on the ecliptic (the sun’s path in front of the backdrop stars), the moon can swing anywhere from 5 degrees north to 5 degrees south of the ecliptic (the green line on our sky charts). There are times when the moon even occults (passes in front of) Spica.

Venus also meets up with Spica in a complicated grouping of five different 8-year cycles. Close conjunctions happen rather frequently but occultations between planets and 1st-magnitude stars are extremely rare. The last time Venus occulted Spica was on November 10, 1783, and the next time won’t be until September 2, 2197.

The illuminated side of the waning crescent moon always points in the moon’s direction of travel in front of the constellations of the zodiac. Although the moon appears to go westward due to the Earth’s orbital motion, the moon actually goes eastward in front of the stars due to the moon’s orbital motion. Note the moon’s change of position relative to Venus over the next several mornings, as we show on the sky chart below. 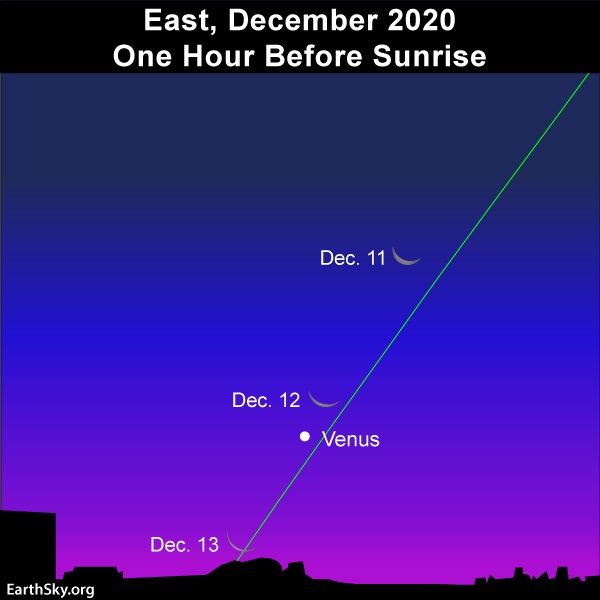 Yes, notice the moon’s daily change of position to envision the moon’s orbital motion. The lit side of a waning crescent moon is your arrow in the sky, pointing to where the sun will rise over the horizon.

Bottom line: The waning moon passes bright Spica – Virgo’s sole 1st-magnitude star – before sunup on December 10, 2020. As viewed from across Earth that morning, the illuminated side of the moon points in the direction of brilliant Venus.