See all 5 bright planets in November! 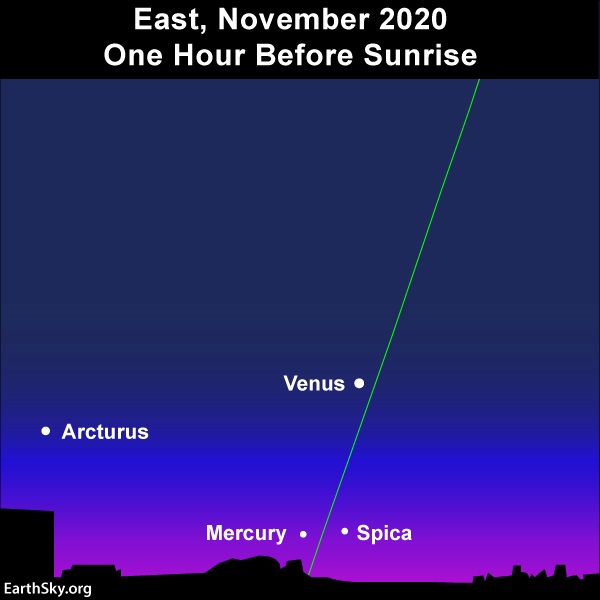 See all five bright planets in November 2020. Three of them – Mars, Jupiter and Saturn – pop out first thing at dusk and nightfall. The other two – Mercury and Venus – are found in the early morning sky. By bright planet, we mean any solar system planet that is easily visible without an optical aid and that has been watched by our ancestors since time immemorial. In their outward order from the sun, the five bright planets are Mercury, Venus, Mars, Jupiter and Saturn. 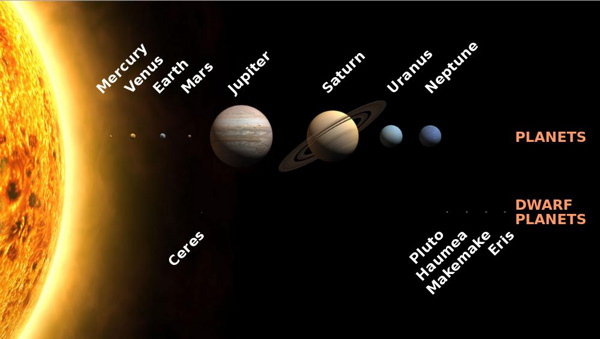 Planets and dwarf planets of the solar system. Sizes to scale but distance are not. Click here for planetary distances.Image credit: Wikimedia Commons. Click here for a larger chart 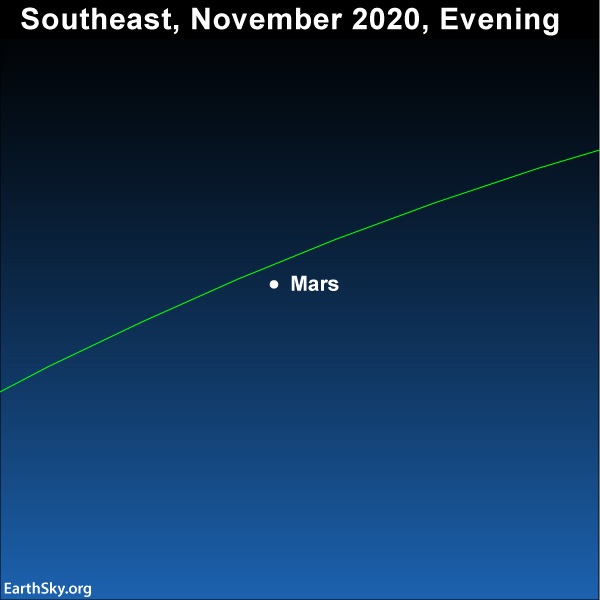 The red planet Mars lights up the southeast sky at nightfall.

As the sky darkens, watch for the planet Saturn to pop out about 5 degrees to the east of Jupiter. Five degrees is roughly the width of two fingers at an arm length from the eye. Saturn, although as brilliant as a 1st-magnitude star, pales next to Jupiter, which outshines the ringed planet by 12 times. 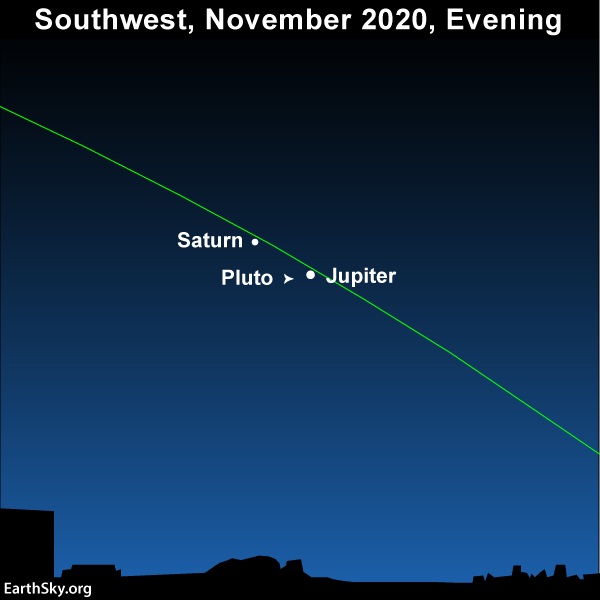 Look in the southwest sky at nightfall for the bright planets Jupiter and Saturn. For the fun of it, we show the dwarf planet Pluto, although this distant world is way too faint to be seen without a telescope.

Use Venus to find Mercury in the morning sky

You can’t miss Venus, the sky’s brightest planet, in the predawn/dawn sky. This dazzling world ranks as the 3rd-brightest celestial body to bedeck the heavens, after the sun and moon. Find Venus first, and then seek for Mercury beneath this shining beacon and rather close to the horizon an hour or more before sunrise. An unobstructed horizon and binoculars always come in handy for any Mercury quest. Although Mercury is as bright as a 1st-magnitude star, Venus outshines Mercury by about 70 times in early November.

If you miss Mercury in early November, don’t fret (if you live at northerly latitudes). Mercury is brightening by the day. In addition, Mercury is climbing higher in the sky, to stay out longer before sunrise. By the time that Mercury reaches its greatest western (morning) elongation from the sun on November 10, it’ll be some three times brighter than it was in the first few days of November, and rising a good 20 minutes earlier.

Live in the US or Canada? Find out more specific info at Old Farmer’s Almanac

From virtually anyplace worldwide, get more specific info at TimeandDate

Take advantage of your golden opportunity to view all 5 bright planets in November 2020. Best of all, you don’t have to say up all hours of the night to spot the. Look for Mars, Jupiter and Saturn as soon as night fall. The use Venus to catch Mercury in the morning sky. Good luck!