Moon and star Spica on March 24 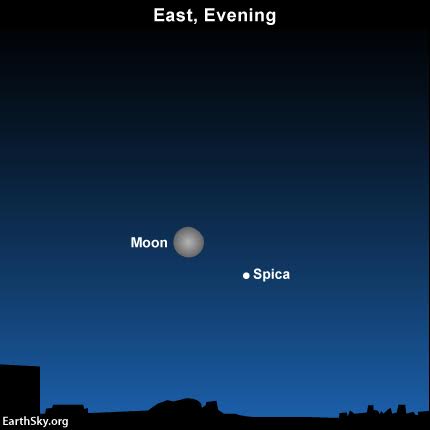 Tonight – March 24, 2016 – people around the world will see a full-looking waning gibbous moon in the vicinity Spica, the brightest star in the constellation Virgo the Maiden.

Although the moon and Spica appear close together on the sky’s dome, they are actually nowhere close in space. Tonight’s moon resides about one and one-third light-seconds distant from Earth while Spica lies far beyond the moon, at about 260 light-years away.

This evening, as the moon rises over the eastern horizon at dusk or nightfall, the moon will probably appear full to the eye. It’ll still be about 98% illuminated by sunshine, as seen from North America.

How much of the moon can we see from Earth?

Thank you! Your submission has been received!
Oops! Something went wrong while submitting the form.
END_OF_DOCUMENT_TOKEN_TO_BE_REPLACED