First full moon on Christmas since 1977

Moon phases recur on or near same calendar dates every 19 years. Why didn’t we in North America have a full moon on Christmas Day 19 years ago? 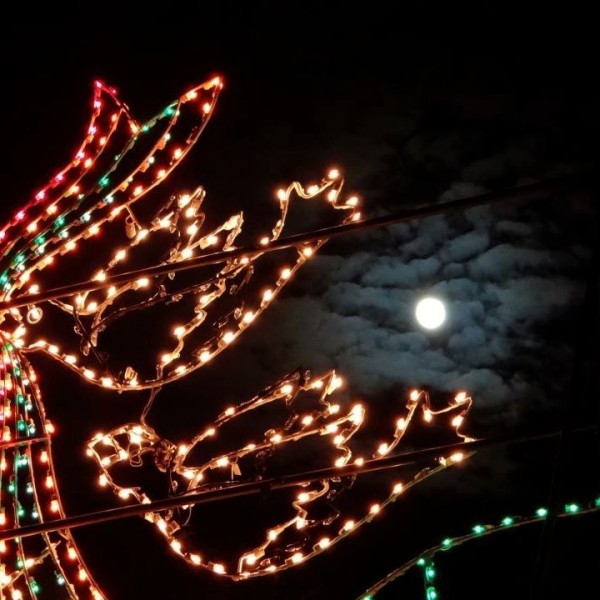 Happy Christmas to all who celebrate it! Photo by EarthSky community member Rich Tommater in St. Petersburg, Florida. Thanks, Rick.

This month, the December full moon falls on Friday, December 25, 2015. For Earth’s Western Hemisphere, it’s the first full moon on Christmas Day since 1977.*

We won’t have another full moon on a Christmas Day until 2034.

A 19-year cycle of the moon is the reason. Amazingly, the moon’s phases recur on (or near) the same calendar dates every 19 years. This cycle – known as the Metonic cycle – happens because 235 returns to full moon almost exactly equal 19 years.

So, in other words, the phases of the moon realign (or nearly realign) with the same calendar dates every 19 years. We just missed a full moon on Christmas 19 years ago; instead, the full moon fell on Christmas Eve. It was December 24, 1996 at 20:41 Universal Time, or UT.

Astronomically speaking, the moon is only full for an instant – at the moment that it’s 180o opposite the sun in ecliptic longitude.

Although the moon turns full at the same instant worldwide, the clock reads differently by timezone. On a worldwide scale, the full moon actually comes at all hours around the clock. See the worldwide map below. The full moon takes place before sunrise December 25 in North America, noon in Europe and Africa and after sunset December 25 in eastern Asia, Australia and New Zealand. 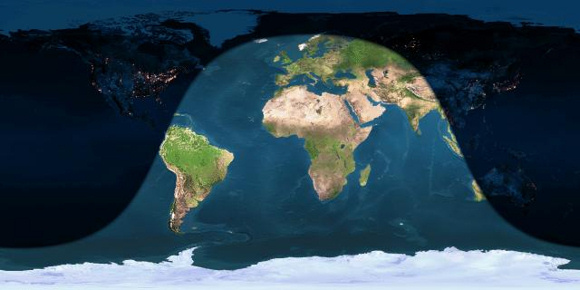 Moon cycles are not commensurate with the calendar, which is based upon the seasons – not the lunar cycle. Therefore, one year from now, the December 2016 full moon will not fall on December 25.

The moon will look plenty full tonight as it lights up the nighttime from dusk till dawn. Look for the full-looking moon to rise opposite of the setting sun at early evening. The moon will shine highest up for the night around midnight and then will sink low into the western sky as dawn colors the sky. 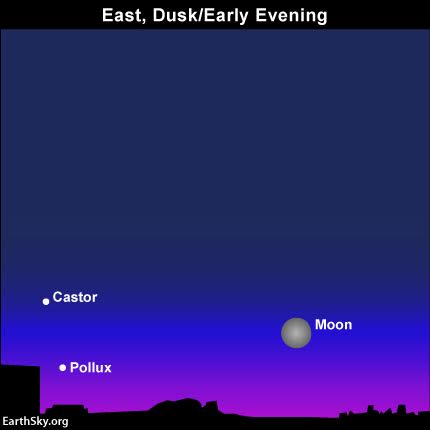 On this Christmas night, 2015, you can see the moon rise near the Twin stars, Castor and Pollux in the constellation Gemini.

*Note: For most of the world’s Eastern Hemisphere (Asia, Indonesia, Australia and New Zealand), the last Christmas full moon happened in 1996. In 1996, the full moon occurred on December 24 at 20:41 Universal Time … December 25 in those places.

Bottom line: The December 25, 2015 full moon is the Western Hemisphere’s first full moon on Christmas Day since 1977. We won’t have another full moon on a Christmas Day until 2034. A 19-year cycle of the moon – called the Metonic Cycle – is the reason. Explanation here.