Moon to sweep by Jupiter and star Antares 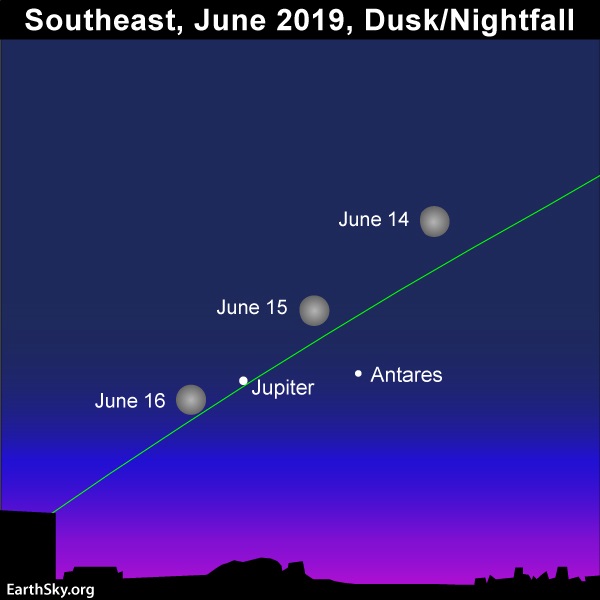 From around the world on the evenings of June 14, 15 and 16, 2019, look for the moon and then for the red supergiant star Antares and the giant gas planet, Jupiter. The moon – now in a waxing gibbous phase, moving toward full moon on the night of June 16-17 – will pass to the north of Antares and Jupiter.

Despite the moon’s glare, you should be able to see Antares and Jupiter relatively easily. Antares counts as a 1st-magnitude star, and Jupiter is far brighter than any star (except our sun), outshining Antares by nearly 30 times. Remember, though, that Antares, being a star, shines by its light. Jupiter shines only by reflecting sunlight.

You can see the moon’s daily change of position for yourself these next several nights. Note the moon’s position relative to Antares and Jupiter on June 14. At the same time on the following evenings – June 15 and 16, 2019 – see how far the moon has moved. Watch for the moon to sweep to the north of the star Antares and then the king planet Jupiter. The moon’s daily change of position is due to the moon orbiting our planet Earth. 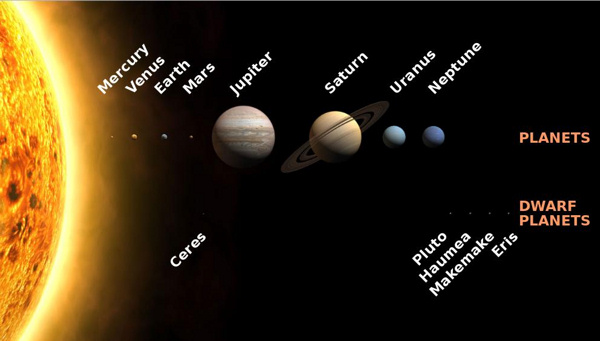 Sizes of planets to scale but distances from sun are not. Image via Wikipedia.

Jupiter is truly the giant planet of our solar system, having about 2 1/2 times the mass (heaviness) of all the other planets in the solar system combined. The diameter of Jupiter is about 11 times that of Earth. Yet, you have to square this diameter figure (11) to find that Jupiter’s surface area exceeds that of our planet Earth by 121 times (11 x 11 = 121). And you have to cube this diameter figure to find out that Jupiter’s volume exceeds Earth’s by about 1,331 times (11 x 11 x 11 = 1331).

Yet, our sun is tiny in contrast to Antares. The size of this red supergiant star is not known with precision. Its diameter is estimated to be somewhere around 340 to 400 solar diameters. I’ll let the inquiring reader figure out Antares’ surface area and volume in solar units.

Bottom line: On June 14, 15 and 16, 2019, watch for the moon to sweep to the north of the red supergiant star Antares and then the king planet Jupiter.