Before dawn on August 21 and 22, 2019, let the moon guide you to the constellation Aries the Ram. When the moon moves away, try star-hopping to Uranus using guide stars within this constellation. Good luck!

Our chart – above – shows the moon in the early morning sky on August 21, 22 and 23. The green line represents the ecliptic – the yearly path of the sun in front of the constellations of the zodiac. The ecliptic also highlights the approximate monthly path of moon, and overall, the ecliptic more or less defines the plane of the solar system. On the mornings of August 21 and 22, you’ll find the waning gibbous moon sweeping close to the planet Uranus. They’ll be up late at night, too, but low in the sky. You’ll have a better view of them in the wee hours, or before dawn breaks.

Of course, the moon and Uranus are nowhere near each other in space. The moon, our closest celestial neighbor, lies a little less than 250,000 miles (400,000 km) from Earth. Uranus, the seventh planet outward from the sun, lodges well over 7,000 times the moon’s distance from us.

Also, don’t expect to view Uranus with the unaided eye. People with exceptional eyesight might be able to see Uranus as a faint speck of light on a dark, moonless night. Most likely, you would need binoculars (at least) and a steady hand (or a tripod) to see Uranus with the nearby bright moon obscuring this world these next several mornings. For that matter, you’ll probably need binoculars to spot Uranus on almost any night. For the ultimate challenge – catching Uranus with the eye alone – try your luck when the moon leaves this part of the sky, say, around new moon at the end of August. Read more: 2019’s closest new moon on August 30. 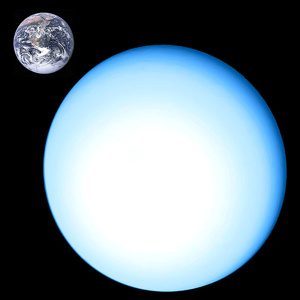 Although Uranus looks like a faint star, even through binoculars, that’s only because this distant world resides in the outskirts of our solar system, at about 19 astronomical units (AU) from the sun. Uranus’ diameter is actually 4 times greater than Earth’s diameter, and its surface area some 16 times greater than that of Earth.

Most of us need binoculars and a sky chart to see this faint world that lurks at the threshold of visibility in our sky. Even through binoculars, though, Uranus appears no brighter than a dim star. You’ll need a telescope magnifying at least 100 times and a steady sky free of atmospheric disturbance to resolve Uranus into a tiny disk.

Uranus will reside in front of the constellation Aries the Ram for years to come, so a good familiarity with this constellation is your ticket to locating this faint world. For a detailed sky chart of Aries, click on The Sky Live; and for a sky chart showing Uranus’ position from 2019 to 2032, click on Naked Eye Planets. Or try this chart via Sky & Telescope. 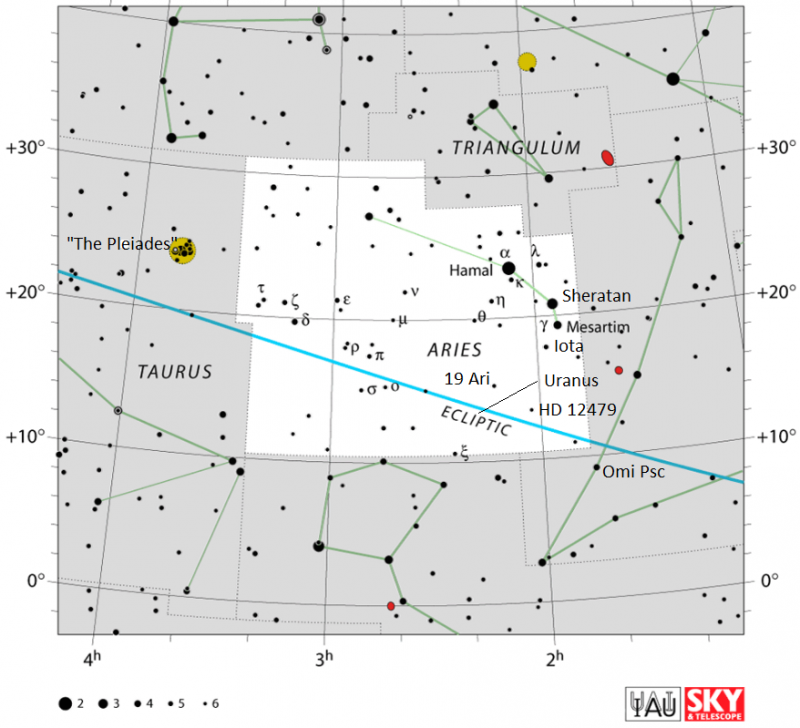 A dark, moonless night provides your best chance of catching Uranus, which is hard to see with the unaided eye but easy to spot with binoculars. Uranus is slightly south of the ecliptic, as we point out on the sky chart. Uranus forms a triangle with two stars that are almost the same brightness as Uranus: 19 Arietis (abbreviated 19 Ari) and HD 12489. Chart via the IAU.

If you can identify those Aries stars, you are well on your way to star-hopping to Uranus. Your next move is to find the dim star Iota Arietis (abbreviated Iota on the above sky chart), which is only a touch south of the star Mesartim (sometimes spelled Mesarthim). Iota Arietis, though faint, is clearly visible in a dark, moonless sky. An imaginary line drawn from Mesartim through Iota Arietis points to the vicinity of the planet Uranus and the two faint stars making a triangle with Uranus: 19 Arietis and HD 12489.

These two stars forming a triangle with Uranus pretty much match Uranus in magnitude. They all hover around 6th magnitude in brightness, near the limit of naked-eye visibility. By good fortune, this triangle fits rather readily within a single binocular field, simplifying our search for Uranus, the ice giant planet.

Visit Unitarium.com to know the moon’s present distance from Earth in miles, km, or in astronomical units.

Visit Heavens-Above.com to know the the planet Uranus’ present distance from Earth in astronomical units.

Bottom line: Before dawn on August 21 and 22, 2019, let the moon guide you to the constellation Aries the Ram. When the moon moves away, try star-hopping to the planet Uranus using guide stars within Aries. Good luck!