Moon is still moving past 2 planets and a bright star, Antares in the constellation Scorpius. Learn why this constellation is never in the sky with Orion. 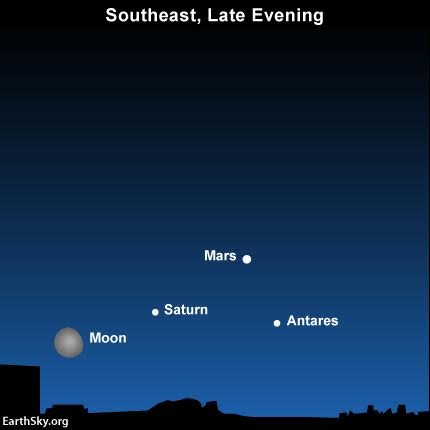 Tonight – April 25, 2016 – the waning gibbous moon, planets Saturn and Mars, and the star Antares rise in the east in late evening (earlier at evening as seen from the Southern Hemisphere). Afterwards they’re visible for the rest of the night. Are you noticing how bright Mars is now? It’s going to get much, much brighter in the coming month. Go back to our post for April 24 to learn why.

Mars shines more brightly than Antares or Saturn now. You might notice that Saturn exhibits a golden color, while both Antares and Mars glower red.

Mars is getting bright! Here’s why 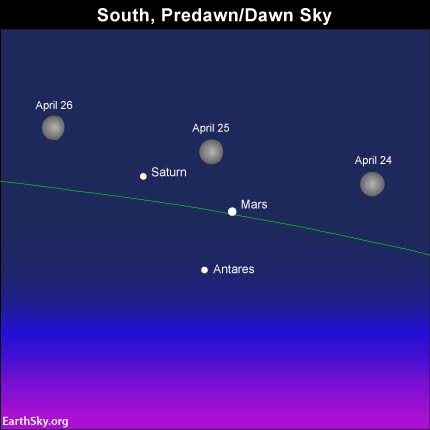 The moon sweeps near Mars, Saturn and Antares for several nights, around April 24, 25 and 26. 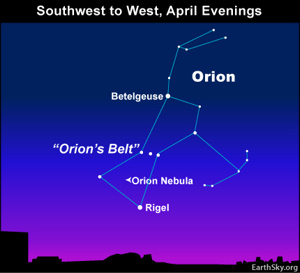 Just don’t expect these objects and the moon to rise in the east this evening until after Orion the Hunter sets in the west. The moon rises at nearly the same hour as Antares, which is a red supergiant star and the brightest star in the constellation Scorpius the Scorpion. According to skyline, Orion and the Scorpion are archenemies and never appear in the same sky together.

At this time of year, Orion begins each night not far from the western horizon. Orion sinks beneath that horizon by late evening. At about the time Orion’s red supergiant star Betelgeuse sets in the west, watch for Antares to rise in the east. To know these stars’ precise rise/set times in your sky, check out this U.S. Naval Observatory website.

That means that, by late May or early June, Betelgeuse will have disappeared from our evening sky, as the sun passes between us and the constellation Orion. Meanwhile, Antares will shine from dusk until dawn! The stars in its constellation Scorpius are located in the opposite direction in our Milky Way galaxy.

And that’s the real reason Orion and Scorpius never appear in the sky together. They are on opposite sides of Earth, in the grander space of the Milky Way. 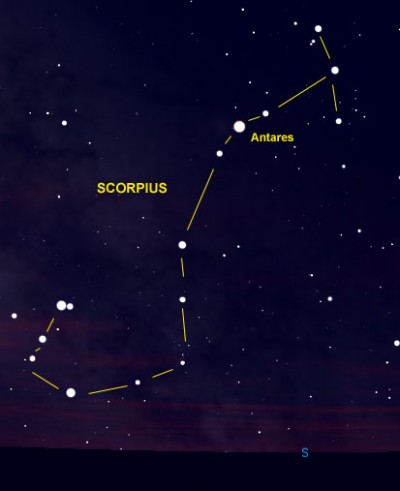 Scorpius is one of the few constellations that looks like its namesake. The bright red star Antares marks the Scorpion’s Heart. Notice also the two stars at the tip of the Scorpion’s Tail. They are known as The Stinger.

Bottom line: Moon is still moving past 2 planets and a bright star, Antares in the constellation Scorpius. Learn why this constellation is never in the sky with Orion.