Moon sweeps through Leo June 15 and 16 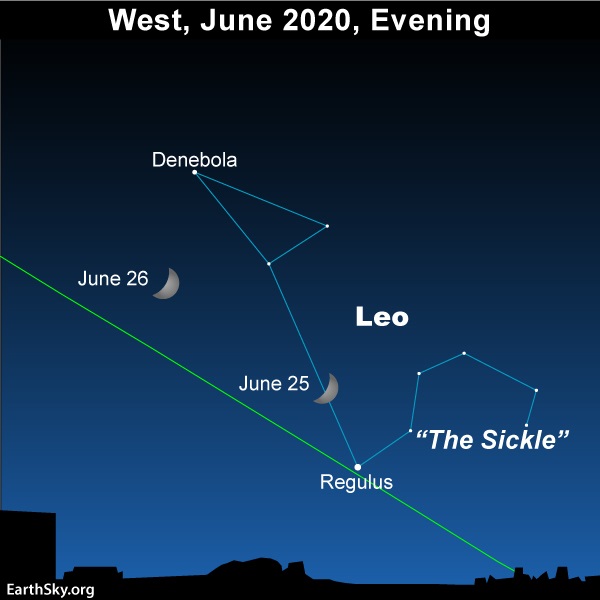 The bright star shining close to the waxing crescent moon on June 15, 2021, is Regulus, Heart of the Lion in the constellation Leo. The following night – June 16 – the moon will have moved some 13 degrees (26 moon-diameters) east on the sky’s dome, following its endless orbit around Earth. It’ll be closer to Denebola, the Lion’s Tail.

If you look carefully and have a dark-enough sky, you can make out patterns in the stars near both Denebola and Regulus. Denebola is part of a triangle of stars. Regulus is part of a pattern that looks like a backwards question mark, with Regulus – the brightest star in Leo – marking the bottom of this question mark pattern. This pattern of stars is called the Sickle. It’s not a constellation but instead an asterism, or recognizable pattern on the sky’s dome.

Regulus is part of a backwards question mark pattern known as the Sickle in Leo. Image via Derekscope.

As the moon continues to move from night to night, shifting eastward in front of the constellations of the zodiac, it’ll move onward away from Leo. How can you find Regulus then? One way is to look for the stars of the Sickle. Another way is to use the bowl of the Big Dipper to find your way to Regulus.

Regulus is considered to be one of the four Royal Stars of ancient Persia. These Royal Stars mark the four quadrants of the heavens. They are Regulus, Antares, Fomalhaut, and Aldebaran.

Regulus is the only bright star to reside almost squarely on the ecliptic, that is, Earth’s orbital plane projected onto the sphere of stars. Regulus coincided with the summer solstice point some 4,300 years ago. In our time, the sun has its annual conjunction with Regulus on or near August 23, or about two months after the summer solstice, or alternatively, one month before the autumn equinox. Regulus will mark the autumn equinox point some 2,100 years into the future.

What is the ecliptic?

Whether you enjoy the arcane speculation on the Royal Star Regulus and the Age of Aquarius – or not – that star now close to the moon has given definition to the ecliptic and the zodiac since time immemorial!

When does the Age of Aquarius begin?

Bottom line: Regulus is the brightest star in the constellation Leo the Lion.  The moon can help you find it.