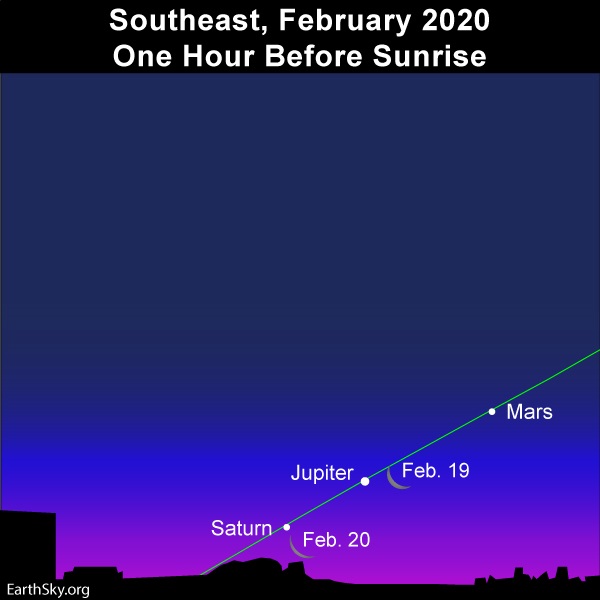 On the above sky chart above, we don’t show the moon for February 18, 2020, because – from a good swath of North America – it’ll actually be in front of Mars, and covering over the red planet. The moon, forever in motion in front of the constellations of the zodiac, swings in the vicinity of Jupiter on February 19 and to the south of Saturn on February 20.

If you’re on the right place on Earth’s surface, you can watch the moon occult (cover over) Mars on February 18, and then Jupiter on February 19. We elaborate on these lunar occultations later on in our post.

From the Southern Hemisphere and northern tropics, however, this planetary line-up appears more straight up and down relative to the horizon. At far northern latitudes, this line-up pf planets even makes a shallower angle with the horizon than at mid-northern latitudes. In short, all these planets come up sooner before the sun at more southerly latitudes.

The moon is harder to pin down because it moves more quickly than the much slower-moving planets do in front of the “fixed” stars of the zodiac. Look first for the moon, and then seek out the string of planets crossing your sky. From the western half of the United States, you can watch the moon occult Mars during the predawn hours on February 18. 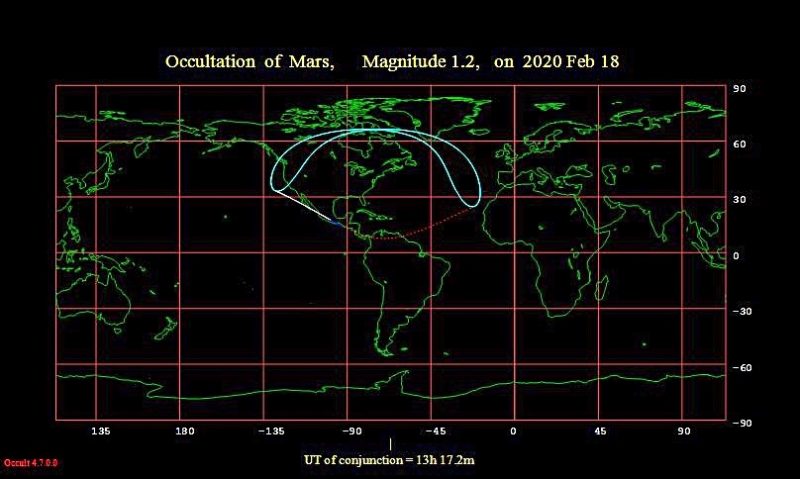 Image via IOTA. See the loop at the upper right above North America? As the moon rises in the predawn hours on February 18, 2020, in this part of the world, Mars will be covered over by the moon. But, later on before dawn, you can watch Mars reappear from behind the moon’s dark side. Read more.

Few, if any, people will see the lunar occultation of Jupiter on February 19, because it happens in Antarctica and the southern tip of South America.

But no matter where you live worldwide, watch for the waning crescent moon to sweep by the three morning planets: Mars, Jupiter and Saturn.