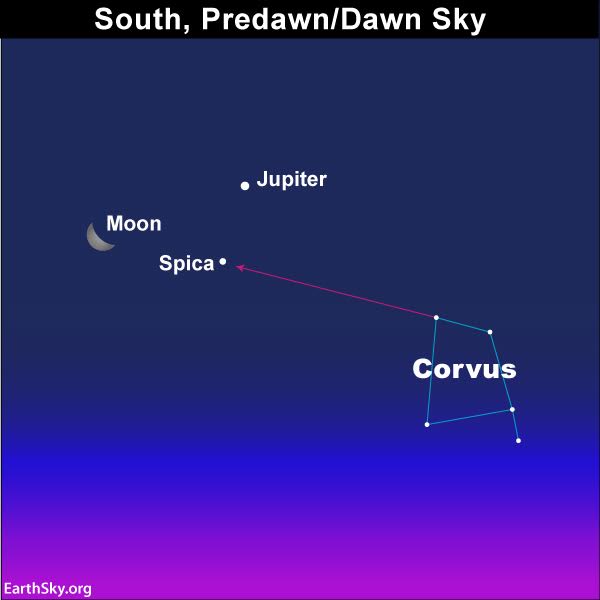 Tomorrow before dawn – Friday, December 23, 2016 – you can see the waning crescent moon near the dazzling planet Jupiter and Spica, brightest star in the constellation Virgo the Maiden. You should have little trouble seeing the moon and Jupiter as the sky is lightening, but you might have to be up and about some 90 minutes (or sooner) before sunrise to see Spica – and especially the stars surrounding Spica, the smallish constellation Corvus the Crow.

In years when the brilliant planet Jupiter isn’t close to Spica on the sky’s dome, practiced sky watchers count on the small but distinctive constellation Corvus to verify that they are looking at Spica, Virgo’s one and only 1st-magnitude star. In 2017, Jupiter makes things even easier and helps us find Spica with relative ease.

Because Spica rates as a key star of the zodiac, sky watchers know that any bright celestial object in the vicinity of Spica is most likely a planet. Yes, that brilliant starlike object shining some 14 times more brilliantly than Spica in the morning sky is, indeed, the king planet Jupiter.

Become familiar with Spica now, and you can watch Jupiter’s changing position in front of the constellation Virgo throughout 2017. At present, Jupiter is traveling eastward in front of the constellation Virgo. The planet will have a conjunction with Spica on January 20, 2017. A little more than two weeks after that, Jupiter will begin its apparent retrograde, or westward, motion in front of Virgo on February 6, 2017. Afterwards, it’ll be moving back toward Spica. Then Jupiter will have a second conjunction with Spica on February 23, 2017.

Jupiter’s retrograde in front of Virgo will end on June 10, 2017, when Jupiter reaches its farthest point west of Spica. Jupiter starts to go eastward again in Virgo, and meets up with the star Spica for the third time in the year 2017 on September 5, 2017.

Prepare yourself now, because 2017 will be an extraordinarily fine year for using the star Spica to observe Jupiter’s retrograde loop in front of the constellation Virgo.

Bottom line: The waning crescent moon meets the dazzling planet Jupiter and Spica, brightest star in Virgo the Maiden, on the morning of December 23, 2016. Get ready because Spica and Jupiter will be near each other throughout 2017.

Thank you! Your submission has been received!
Oops! Something went wrong while submitting the form.
END_OF_DOCUMENT_TOKEN_TO_BE_REPLACED