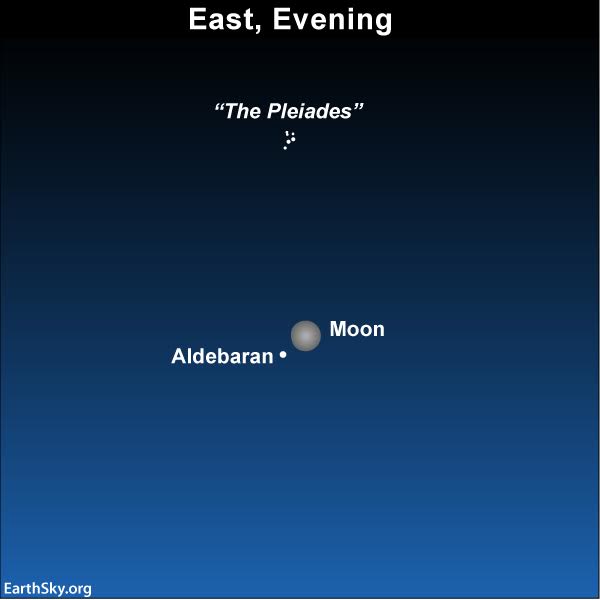 Tonight – December 12, 2016 – the almost-full waxing gibbous moon occults (covers over) Aldebaran, the star depicting Taurus the Bull’s ruddy eye. In addition, the brilliant supermoon is hindering this year’s Geminid meteor shower, which is going on now and expected to peak tomorrow night (December 13-14).

To convert UTC to local time in North America:

By the way, at the white lines, it’s a graze occultation, whereby the star flits in and out of view along the moon’s limb.

The moon will be out in full force these next few nights, to obliterate all but the brightest Geminid meteors.

If you’re game, give this shower a try anyway. The Geminids rank as one of the year’s more prolific showers, peppering the nighttime with 50 or more meteors per hour on a dark, moonless night. Despite the moonlight, some Gemini meteors will surely (we hope!) be bright enough to overcome the moonlit glare.

From anywhere worldwide, the shower offers the greatest number of meteors in the wee hours after midnight, centered around 2 a.m. local time.

Bottom line: On December 12, 2016 the almost-full moon occults, or covers over, the star Aldebaran. Meanwhile, this moon is obscuring the annual Geminid meteor shower.

Thank you! Your submission has been received!
Oops! Something went wrong while submitting the form.
END_OF_DOCUMENT_TOKEN_TO_BE_REPLACED