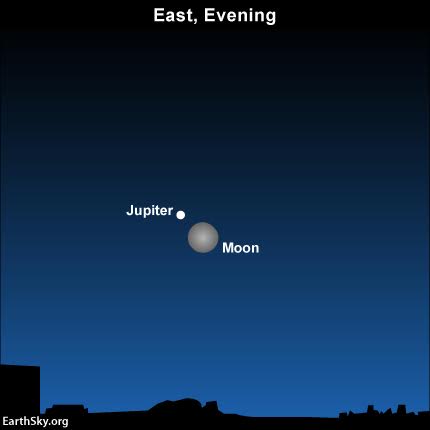 Tonight – February 23, 2016 – the planet Jupiter should be yours to behold, given a clear sky from early evening until dawn. That’s even if you don’t know your cardinal directions, or if reading sky charts is not your forte. On the night of February 23, the moon will be near Jupiter in the night sky. And Jupiter is now nearly as bright as it will be for this entire year. The result is a beautiful sky scene. Don’t miss it!

Simply look for the full-looking moon in the east at early evening – or an hour or two after sunset. The moon may appear full to your eye on the evening of February 23, but it won’t be astronomically full – most directly opposite the sun. Full moon came on February 22 at 1820 UTC (1:20 p.m. ET).

No matter. Just find tonight’s full-looking waning gibbous moon, and the dazzling star-like object near it will be the king planet Jupiter.

Jupiter is the third-brightest celestial object to light up the sky, after the moon and the planet Venus. But Venus is now a morning planet, rising roughly an hour before the sun. Until then, the king planet Jupiter rules the night.

In fact, if you don’t get up early and look for Venus at early dawn, you might miss Venus altogether. It rises shortly before sunrise. Meanwhile, Jupiter stays out nearly all night.

Possibly, with no moon to guide you, you could mistake Sirius, the brightest star in the nighttime sky, for Jupiter. On these February evenings, shortly after nightfall, Jupiter is seen in the eastern sky, while Sirius is found in the southeast, some distance to the right of Jupiter in early evening (assuming you’re in the Northern Hemisphere). Practiced sky watchers use the prominent constellation Orion to confirm that they’re looking at Sirius. The three stars of Orion’s Belt always point to nighttime’s brightest star.

There’s another way to distinguish Jupiter from Sirius. Planets tend to shine with a steadier light than the twinkling stars. If you can find both Jupiter and Sirius tonight, note how steadily Jupiter shines in contrast to Sirius. Sirius oftentimes sparkles wildly, especially when it’s near the horizon, flashing in all the colors of the rainbow.

Bottom line: On the night of February 23, 2016, let the bright moon be your guide to the king planet Jupiter!

Thank you! Your submission has been received!
Oops! Something went wrong while submitting the form.
END_OF_DOCUMENT_TOKEN_TO_BE_REPLACED