Where is the Milky Way on May evenings? 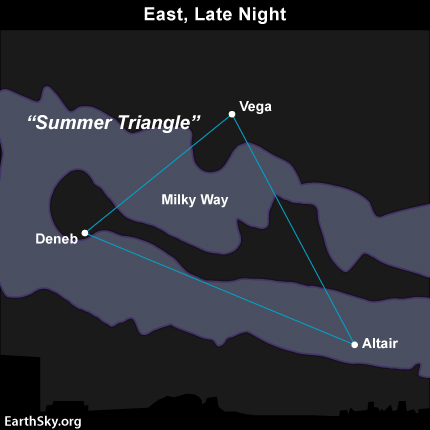 In the month of May, if you’re in a dark location at northern temperate latitudes, you might be searching for one of the sky’s most spectacular sights, the starlit band of the Milky Way. You won’t find it in the early part of the night. That luminous band of stars arcing across the dome of sky is nowhere to be seen as evening falls in May. Where is the the Milky Way at nightfall this month?

For starters, remember that the disk of our Milky Way galaxy is flat, like a pancake. At northern temperate latitudes, as evening falls in the month of May, the plane of the pancake-shaped galactic disk pretty much coincides with the plane of your horizon.

Because the Milky Way rims the horizon in every direction at nightfall and early evening, we can’t see this roadway of stars until later at night. Then … whoa! Beautiful.

Even so, the Milky Way is pretty much out of sight in our Northern Hemisphere sky during the evening hours in May.

Like the sun, the stars rise in the east and set in the west. If you stay up until late night – near midnight in early May, a couple of hours earlier by June – you’ll begin to see the the stars of the Summer Triangle – Deneb, Vega, and Altair – rising above your eastern horizon.

In a dark country sky, the Milky Way’s band of stars becomes visible as well, for the Milky Way passes right through the Summer Triangle. Watch for it, if you’re up late this month.

Bottom line: The Milky Way’s softly-glowing band of luminescence hides behind the horizon at nightfall and early evening in the month of May. But if you stay up until around midnight, you’ll begin to see the starlit band of the Milky Way rising in the eastern sky.

Thank you! Your submission has been received!
Oops! Something went wrong while submitting the form.
END_OF_DOCUMENT_TOKEN_TO_BE_REPLACED