Look for M13 in Hercules 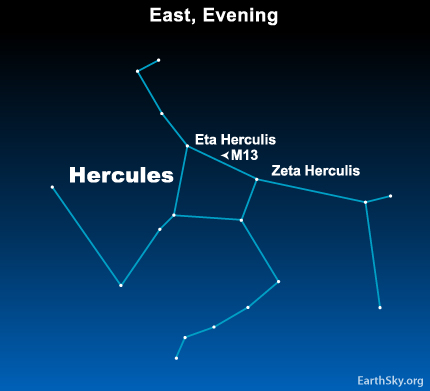 Tonight, look for the great M13 star cluster in the constellation Hercules!

Look back at yesterday’s chart if you want to see how to locate the constellation Hercules above the star Vega. Today’s closer view can help you identify the most famous deep-sky object within this constellation. It’s a globular star cluster known as M13 or the Great Cluster in Hercules.

M13 is a densely-packed cluster of hundreds of thousands of stars, more than 25,000 light-years from Earth.

The chart at the top of this post shows the location of M13. It’s about a third of the distance along a line between the stars Eta and Zeta Hercules. The image above is a fabulous telescopic image of M13. In your sky you’ll see it differently, depending on what instrument you’re using.

To the eye alone, M13 is barely visible. You would need the darkest possible sky – and the best possible conditions – even to glimpse it. But binoculars will pick up the cluster as a hazy spot of light. And a telescope would reveal a glorious cluster of stars – symmetrical in shape – with stars more closely packed at its center.

Globular star clusters such as M13 are thought to be our galaxy’s most ancient inhabitants. Billions of years before our sun formed, the stars of M13 were burning brightly!

Thank you! Your submission has been received!
Oops! Something went wrong while submitting the form.
END_OF_DOCUMENT_TOKEN_TO_BE_REPLACED