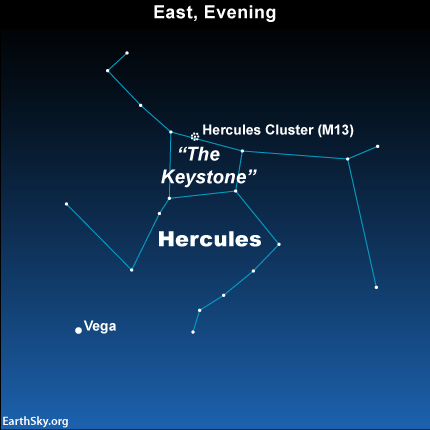 Tonight, from mid-northern latitudes, you can easily find the brilliant star Vega in the eastern sky at dusk and nightfall. Vega acts as your guide star to the Keystone – a pattern of four stars in the constellation Hercules.

Look for the Keystone asterism – star pattern – to the upper right of the brilliant blue-white star Vega. Hold your fist at arm’s length. There is easily enough room between Vega and the Keystone for your fist to fit between the two.

You can also locate the Keystone by using Vega in conjunction with the brilliant yellow-orange star Arcturus. From mid-northern latitudes, Arcturus is found quite high in the eastern sky at nightfall and evening. By late evening, Arcturus will have moved over to the southern sky. The Keystone is found about one-third of the way from Vega to Arcturus, the two brightest stars to grace the Northern Hemisphere’s spring and summertime sky. 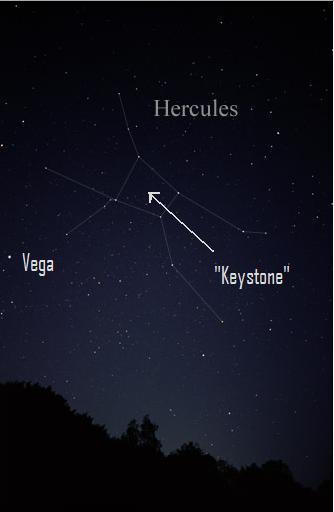 Before you can find M13, you need to find the Keystone in Hercules, a pattern of four stars. As darkness falls, look for the Keystone to the upper right of the brilliant star Vega. Image via Wikimedia Commons.

Most likely, you’ll need binoculars to see the Hercules cluster, although sharp-eyed people can see it with the unaided eye in a dark, transparent sky. Through binoculars, this cluster looks like a dim and somewhat hazy star. But a telescope begins to resolve this faint fuzzy object into what it really is – a great big, globe-shaped stellar city populated with hundreds of thousands of stars!

The Keystone and the Hercules cluster swing high overhead after midnight, and are found in the western sky before dawn. 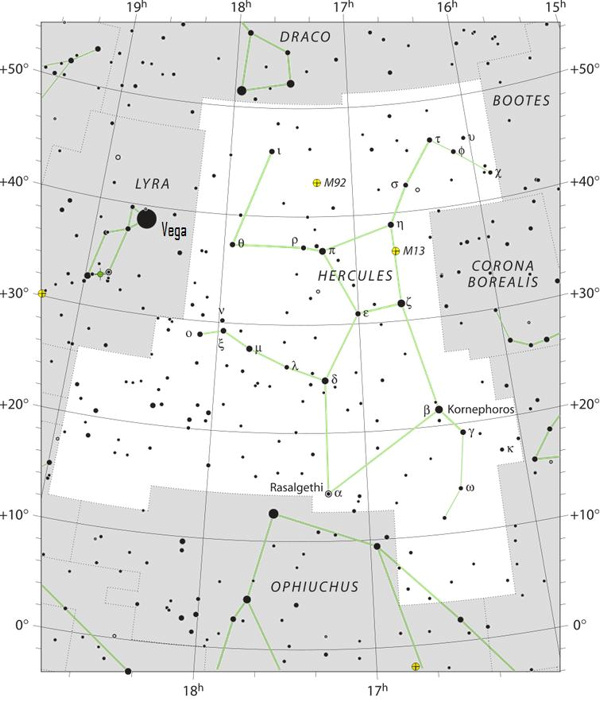 View larger. | Can you find the Keystone on this chart? See the compact grouping of four stars at the center of Hercules? That’s it. Note the whereabouts of Messier 13 within the Keystone pattern. 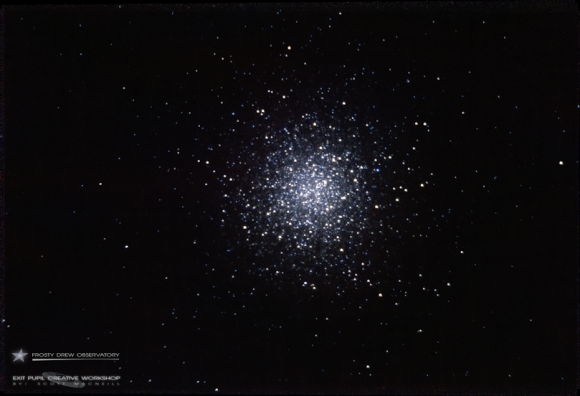 The Great Cluster in Hercules – aka M13 – as captured by our friend Scott MacNeill at Frosty Drew Observatory in Charlestown, Rhode Island. Thanks, Scott!

Bottom line: Let the bright star Vega guide you to a famous star pattern in Hercules – called the Keystone – and then to the Great Cluster in Hercules, aka M13, a famous globular star cluster.