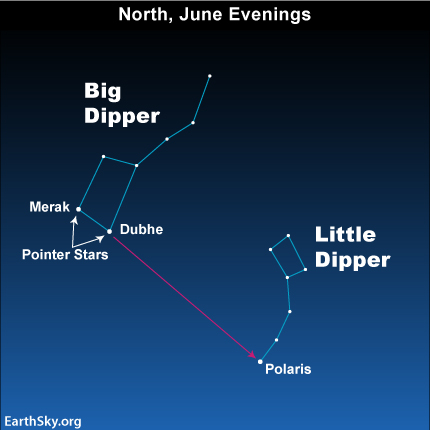 Find the Little Dipper, using the Big Dipper as a guide.

Tonight … how to find the Little Dipper using the Big Dipper as a guide.

On June evenings, you can find the Big Dipper high in the north. Notice that it has two parts – a bowl and a handle. Look at the outer two stars in the bowl of the Big Dipper, those stars farthest from the handle. Those stars are sometimes called The Pointers because they point to the North Star, also known as Polaris. And Polaris is the last star in the handle of the Little Dipper. 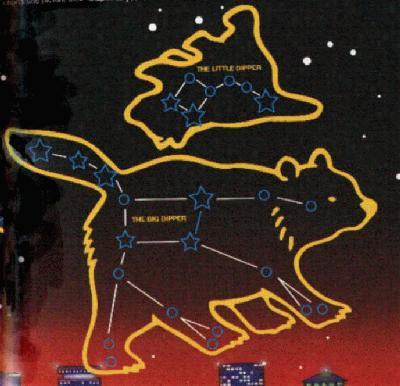 The Big and Little Dippers are asterisms – recognizable patterns of stars – within the constellations Ursa Major and Ursa Minor. Image via Dill Knob Observatory.

Richard Hinkley Allen in his book Star Names: Their Lore and Meaning claims the Greek constellation Ursa Minor was never mentioned in the literary works of Homer (9th century B.C.) or Hesiod (8th century B.C.). That’s probably because this constellation hadn’t been invented yet, that long ago.

According to the Greek geographer and historian Strabo (63 B.C. to A.D. 21?), the seven stars we see today as part of Ursa Minor (the Little Dipper) didn’t carry that name until 600 B.C. or so. Before that time, people saw this group of stars outlining the wings of the constellation Draco the Dragon.

When the seafaring Phoenicians visited the Greek philosopher Thales around 600 B.C., they showed him how to navigate by the stars. Purportedly, Thales clipped the Dragon’s wings to create a new constellation, possibly because this new way of looking at the stars enabled Greek sailors to more easily locate the north celestial pole.

But it’s not just our names for things in the sky that change. The sky itself changes, too. In our day, Polaris closely marks the north celestial pole in the sky. In 600 B.C. – thanks to the motion of precession – the stars Kochab and Pherkad more closely marked the position of the north celestial pole.
Bottom line: You can easily find the Big Dipper high in the north on June evenings. Use the two outer stars in the bowl of the Big Dipper to find Polaris, the North Star. Polaris marks the end of the handle of the Little Dipper.

See Draco the Dragon, and a former pole star