First quarter moon and Regulus on May 21 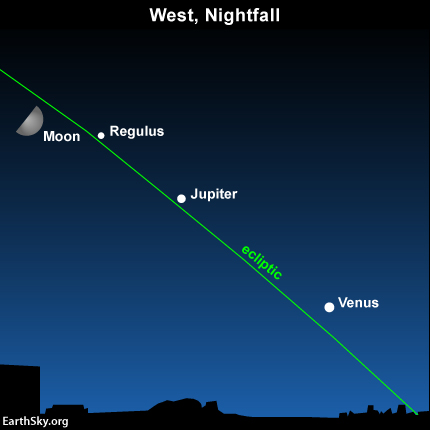 Tonight – May 25, 2015 – the moon will be at or near its first quarter phase, and near the star Regulus, as darkness falls. Don’t mistake the dazzling planet Jupiter for Regulus, however. Regulus, though a 1st-magnitude star, pales next to Jupiter. Regulus shines more closely to tonight’s first quarter moon than Jupiter does. Meanwhile, Venus is the brightest object – besides the moon – up after sunset.

At quarter moon, one half of the moon’s disk is illuminated by sunlight while the other half is immersed in the moon’s own shadow. At this juncture, the quarter moon is said to have completed one-quarter of its journey from new moon to new moon.

A new lunar month or lunation always starts with the new moon. Astronomers commonly number a lunation with the Brown Lunation Number (BLN), whereby lunation 1 starts with the first new moon of 1923 (January 17, 1923).

One week ago, the May 18 new moon marked the beginning of lunation 1143. Looking ahead, the new moon on June 16 will usher in lunation 1144.

There are also other methods for numbering lunations for either scientific or religious purposes. Lunation 1 by the Hebrew Calendar starts on October 7, 3761 BC. Herman Goldstine, who authored the book New and Full Moons: 1001 B.C. to A.D. 1651, has lunation 0 starting on January 11, 1001 BC. The Islamic Calendar places lunation 1 at July 16, 622. The mathematical wizard Jean Meeus assigns lunation 0 to the date January 6, 2000.

Bottom line: As darkness falls on May 25, 2015, enjoy the first quarter moon, the star Regulus and the planets Jupiter and Venus. Tonight’s first quarter moon is one-fourth the way between the May 2015 and June 2015 new moons, and on its way to lunation 1144.

Thank you! Your submission has been received!
Oops! Something went wrong while submitting the form.
END_OF_DOCUMENT_TOKEN_TO_BE_REPLACED