Every visible star is within Milky Way 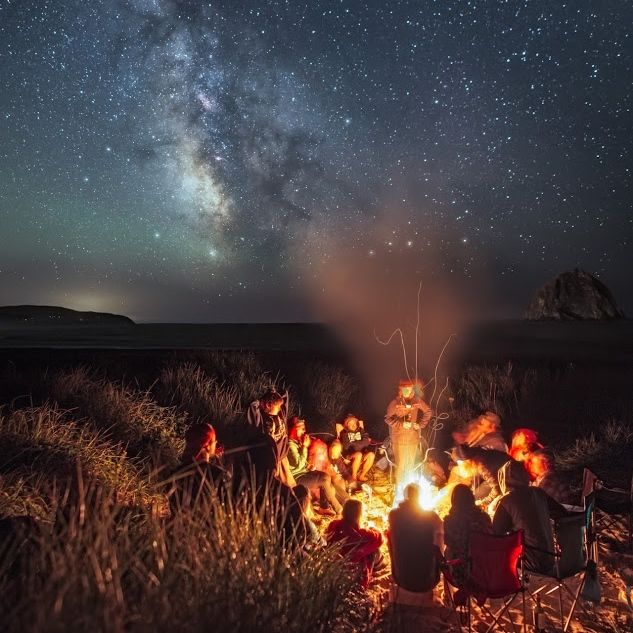 The image at top, showing a campfire under the Milky Way, is a classic from 2014. It’s by Ben Coffman Photography in Oregon. He wrote:

These good folks – co-workers from one of the resorts on Mt. Hood, if I remember correctly – let me take their photo on the beach near Cape Kiwanda [a state natural area near in Pacific City, Oregon]. They looked like they were having fun.

Our galaxy – seen in Ben’s photo above as a bright and hazy band of stars – is estimated to be some 100,000 light-years wide and only about 1,000 light-years thick. That’s why the starlit band of the Milky Way, which is still visible in the evening this month but will soon be less so, appears so well-defined in our sky.

Gazing into it, we’re really looking edgewise into the thin plane of our own galaxy:

This image is a mosaic of multiple shots on large-format film. It shows all 360 degrees of the galaxy from our earthly vantage point. Photography was done in Ft. Davis, Texas, for the Northern Hemisphere shots and from Broken Hill, New South Wales, Australia, for the southern portions. Note the dust lanes, which obscure our view of some features beyond them. Image via Digital Sky LLC.

In the image directly above – showing all 360 degrees of the galaxy as seen from our earthly vantage point – note that the galaxy is brightest at its center, where most of the stars and a 4-million-solar-mass black hole reside. This image shows stars down to 11th magnitude – fainter than the eye alone can see.

If you’re standing under a clear, dark night sky, you’ll see the Milky Way clearly as a band of stars stretched across the sky on late summer evenings. Visit EarthSky’s Best Places to Stargaze page to find a dark location near you, worldwide.

The band of the Milky Way is tough to see unless you’re far from the artificial lights of the city and you’re looking on a night when the moon is down.

If you do look in a dark country sky, you’ll easily spot the Milky Way. And, assuming you’re looking from the Northern Hemisphere, you’ll notice that it gets broader and richer in the southern part of the sky, in the direction of the constellations Scorpius and Sagittarius. This is the direction toward the galaxy’s center.

If you’re in the Southern Hemisphere, the galactic center is still in the direction of Sagittarius. But from the southern part of Earth’s globe, this constellation is closer to overhead.

The image below gives you an idea of the awesome beauty of our Milky Way galaxy in the night sky.

Bottom line: If you look in a dark country sky, you’ll easily spot the starlit band of our huge, flat Milky Way galaxy. Every star in our night sky that’s visible to the unaided eye lies inside this galaxy.

A planisphere is virtually indispensable for beginning stargazers. Order your EarthSky planisphere from our store.